I’ve had a pretty diverse group of R&R  (repair & recover) motorcycles to date.  My first R&R bike was the Kawasaki Concours ZG1000 back in 2014.  Purchased for eight hundred bucks and cut out of long grass to get it out of the field it was in, the Concours got sorted over the winter and put back on the road where it took us to Indianapolis and put over twenty thousand kilometres on it before I sold it on for what I purchased it for this past summer.


The Concours became my riding bike and I sold on the Ninja.  Eventually a KLX250 off road bike came into the garage, but didn’t last long as I struggled to find ways to use it in Ontario: land of no fun.  That led to a too-quick purchase of a Yamaha XS1100 from an entirely dodgy kid that led me into the headaches of sorting ownership. 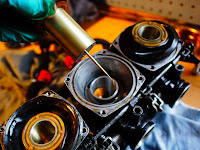 So far I’ve been able to make money on my R&R projects, Shed and Buried style, but I don’t make it easy on myself.  Both the Concours and the XS1100 were big, four carburetor bikes with spaghetti loads of vacuum tubes and complex wiring.  I’ve taken my time looking for the next project and tried to look for something simple, air cooled and single cylinder, but bikes like that don’t come up often.  As the summer fades and winter approaches, it was time to commit to a new R&R project. 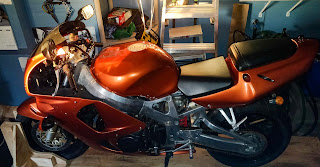 This 1997 Honda CBR900RR Fireblade came up on Facebook buy and sell.  I’ve found the local nature of Facebook’s marketplace offers up interesting opportunities that you don’t find on the hardened semi-pro sellers of Kijiji and Autotrader, where you are much more likely to find shady characters who sell a lot of crap.  This twenty-two year old non-running Honda got me curious enough to contact the seller in Alliston. 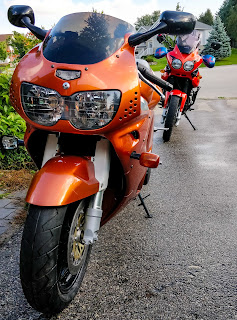 It turns out the bike had gotten tangled in a divorce and was then sidelined.  It was eventually used to settle debts between the estranged couple, but now it belonged to a non-rider with no mechanical experience who just wanted it gone.  Her new partner was trying to sell it for her, but with it not running he wasn’t getting any calls.  A late nineties CBR in safetied, running condition was going for about $4000, he was asking $1200 for this one as is.


We exchanged a number of emails, both of us cautious as we’d both met idiots from online sales (it turns out the internet is actually full of idiots).  As we got to know each other I asked increasingly direct questions – was is repainted to hide crash damage? (no, the former owner didn’t like the stickered stock look)  – why is it in this state?  (where I got the bad karma backstory this bike was unfortunately wrapped up in).  The last problem to solve was how to get it here. 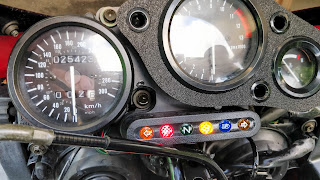 During our give and take the seller offered me the bike for $1200 instead of $1300, and then said he could trailer it down to my place for $100, so I got it at asking price with a $100 delivery charge.  The bike showed up and we had a good chat and ended up being given a milk crate full of pears from his parent’s farm too.  Bonus Honda pears – good deal.  This low mileage, non-runner seemed like a steal upon first look.  The paint’s a bit rough, but for a 20+ year old low mileage bike, she cleaned up a treat.

I was told the bike was a non-runner due to the carbs.  As I got into the bike mechanically I figured I’d look at the fuel system as a whole rather than only looking solely at the carb since I didn’t know how long it had been sitting.  I’m glad I did.  The fuel tank had a worrying amount of rust in it.  I talked to people on the Practical Sportsbike Magazine Facebook group (one of my go-to bike magazines and a great place to talk to DIY types) and got suggestions around various acid etching and chemical routes. 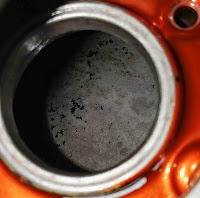 I went out to Canadian Tire aiming to get some industrial grade hydrochloric acid but found Metal Rescue Rust Remover, a water based environmentally friendly solution that neutralizes rust and prevents more from forming.  It also helps the tank retain its structural integrity whereas acid eats holes in it.  My first go at a motorcycle tank cleaning (I’ve been lucky so far and not had to deal with it) went well.  I left the chemical in the tank for about six hours before recovering it back into the bottle (it can be reused).  With the tank sorted it was time to look at the rest.

The vacuum operated fuel pump in the bottom of the tank was clogged and a mess, but it too cleaned up nicely.  With the big end of the fuel system sorted out, I turned to the carbs.

Compared to the buried in the frame carbs on the Concours and XS1100, the Honda’s are a joy to access.  Having seen the mess that was the rest of the fuel system, I figured the carbs were crammed full of guck, and they were.  The only other issues seemed to be more about mechanical cack-handedness than wear. 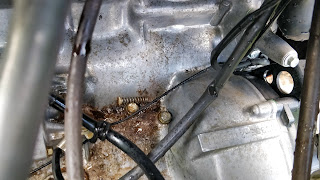 Once on the bench I’ve been able to isolate some obvious problems.  I found a spring laying under the carbs on the engine case.  If you’re fixing a carb it generally helps to use all the parts.  I also found that one of the choke pins were broken, so the choke was only working on three of the four carbs, and the choke cable itself wasn’t attached correctly, so the choke was only moving about 2/3rds of the distance it should.  These are all things that would prevent the bike from starting properly. 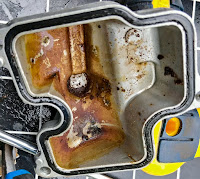 Yesterday I took the float bowls off and had a look at the bottom end of the carbs.  The ethanol in modern fuel is not a good mix with older fuel systems, like carburetors.  Not only can it eat away at the rubber and gaskets in older systems not designed for it, but it can also leave varnish, and worst of all, it’s a water absorber, so it can lead to corrosion in older, gravity fed systems.  If there was ever evidence of modern ethanol based fuels making a mess of a carburetor, it was here in this old Fireblade, where every carb bowl was worse off than the one before it. 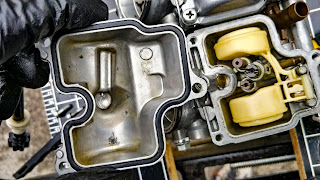 Thanks to some judicious use of carb-cleaner, they cleaned up nicely, but does ethanol ever do a job on mechanical fuel delivery systems!  Fortunately, if I stick with super unleaded from most stations in Canada, it means I’m not running any in this old bike from now on.


I run super in my bikes anyway because they’re very fuel efficient anyway so it doesn’t cost much and, at least on the Tiger, the power commander means I can maximize power out of it.  For the Honda or any other carb fueled bike, you should be running super just to stay away from the ethanol. 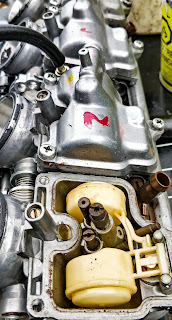 Today I’m going to pull the tops of the carbs and have a look at the state of things (I’m hoping better than below) and finish cleaning them.  I’m also going to see if I can fix that broken choke pin on carb 4 or else I’m going to have to track down the part.  Bikebandit has it for $50US, but no one else seems to have one available.


There are other bits and pieces in this poorly looked after carb that are suspect.  Rather than use boot clamps to attach the carb to the engine, the muppet who owned it before me appears to have put some kind of rubber sealant on them and attempted to ‘glue’ them to the block.  This is stupid in all sorts of ways.  Bits of this rubber seal would deteriorate in the gasoline rich air-fuel mix and get sucked into the engine, and there is no mechanical connection ensuring the carbs are tight and leak free to the engine.  For a system that runs on vacuum, this is a disaster.


The boots have cleaned up nicely, so I also need to source some ring clamps for them.  The Honda specific ones are hard to find, but I’m hoping I can find some aircraft grade ones that are an engineering match and easier to source.  Oetiker Clamps, ironically based in Alliston where the Honda came from, do some nice, high quality options that I should be able to fit.


So much of mechanics come back to common sense.  The guy who owned this before seems to have had a startling lack of it.  I’m hoping for $1200+$500 in parts I can get this Honda humming and ride it for a year before seeing if I can double my money on it (unless we bond).  Safetied bikes of similar vintage with twice the mileage are going for four grand.  Even with all the work done so far, the bike hasn’t cost me a penny in parts and I may be within spitting distance of sorting out this abused Fireblade. 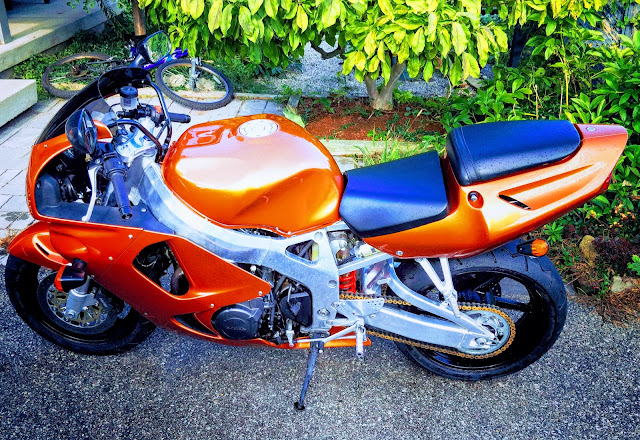 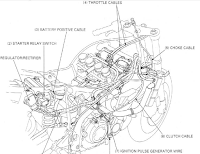 One of the tricky bits of working on old bikes is getting the documentation you need to work on them accurately.  The internet is a gold mine for this.  If you’re working on a late ’90s Honda CBR900RR Fireblade, you’ll find this handy: 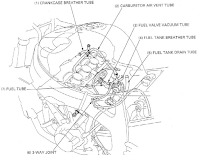 
It has lots of good technical graphics in addition to all the specs you need. 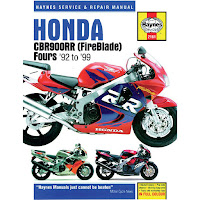 I was also able to source the Haynes Manual for this bike from Fortnine on sale for only $35.  Most other places were over $40US, so finding that on sale was a good first step in this project.


At the moment I’ve got emails out to The Bike Yard in Caledon and Oetiker Clamps in Alliston.  With any luck I can source the bits I need and have this Honda purring even before the snow starts to fly, then I can spend the winter sorting out the other fluids and maintenance before it hits the road in the spring.