MotoGP starts this weekend in Qatar.  Maverick Viñales has launched his first season on the championship capable Yamaha with zeal, topping the time sheets in early free practice.

This year’s shakeup, with new riders in many teams, promises to stir in some chaos.  Marquez doesn’t seem to be able to catch Viñales and this tends to make the volatile Spaniard crashy and dangerous.  A newer, more mature Marques appeared last year more intent on getting points than always being out front, but that was tempered by him actually being out front sometimes.  If Maverick runs away and Marc gets frustrated, this could make for a very interesting season.

I think Lorenzo will only improve as he develops the Ducati into the instrument he needs it to be.  He might be a surprise on Sunday.  I’m a Rossi fan through and through, but unless he can sort out the bike (and if anyone can the Doctor can), he will be an afterthought.  Speculation is already rife around that, but don’t give up on the old dog yet, he’s still got some new tricks I think.

Not to wish ill on anyone, but if Maverick can knock the cocky Marques back a step,  Lorenzo sorts out his Ducati and Rossi does what he always does and remains relevant against all odds, this could turn into a four-or-more-way run at the championship across at least three manufacturers.  That would be epic.  If Dani and Iannone could find form and the rookies (especially Zarco, I love Zarco) keep nipping at their heels, this could be a perfect storm.

… and there’s always Cal Crutchlow to shock and awe when no one thinks he will.  This year might be one for the history books. 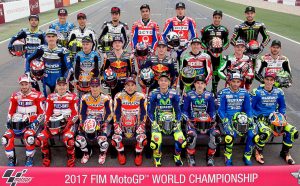