One of the more ASDish qualities I have is finding awards ceremonies difficult to fathom, especially graduations.  Being packed into a room with a big crowd of people is tricky enough.  Doing it under the constant threat of public acknowledgement is agonizing.  I get the sense that North Americans play this up more than in other places, so perhaps there are some cultural influences going on here too, but my savage disregard for awards seems to run deeper than just cultural dissonance.

I am in the process of weathering two days of back clapping by people who thrive on back clapping.  Their love of self aggrandizement (and don’t kid yourself, graduation ceremonies are all about acknowledging and empowering the system) makes my hatred of it confusing to them.  I never feel more alienated from neurotypical people than I do when graduation rolls around. 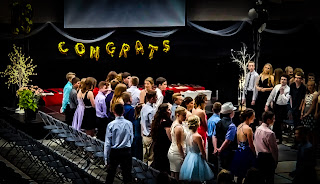 The first was my son’s grade eight graduation put on earnestly by his elementary school.  As in every other graduation I’ve had to weather, this one involved repeatedly congratulating the same students over and over again for being advantaged and conforming to norms in a manner so efficient that they produced outstanding results in a system designed for them.


And why shouldn’t all those advantaged, neuro-typical kids be awarded for these things?  They thrived in the artificial learning environment that is the classroom.  They arrived well fed and clothed, and culturally aligned with the process that was about to assess them.  These neuro-typical students all had a clear understanding of how to manipulate that system to their own advantage.  It was amazing to see how many of the awards focused on that socializing aspect, recognizing compliance in maintaining social norms as the highest virtue.  Awards for helping to run the school appeared thick and fast with happy teachers handing them out while not having to hide their favouritism any more.


I showed up to school in Canada as an immigrant from a lower socio-economic bracket.  I don’t think like other people and have trouble remembering who is who let alone how to create tight social bonds with teachers that would result in any kind of award.  My son gets to skip the immigrant thing and I’ve gone to great lengths to ensure that socio-economics aren’t weighing him down like they did me, but I’ve also given him an even healthier dose of ASD than I have.  He got to sit through two hours of hearing about how all these wealthy, socially engaged and advantaged, neurotypical kids deserve to be honoured by a school system designed for them.  How do you think that made him feel?  He has struggled to finish his elementary career this week on a positive note.  And yes, this makes me angry. 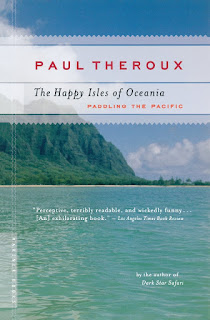 I just finished reading Paul Theroux’s The Happy Isles of Oceania: paddling the Pacific, so I’ve got nautical themes floating around in my head as I write this.  Paul is an odd duck himself.  He takes great pleasure in doing things differently and being alone doesn’t freak him out in the way it does most people; I imagine he’d find graduation ceremonies as alienating as I do.


As I fidgeted in the humidity of that packed room, the idea of a cruise ship came to me.  On that happy ship are all those students predisposed to success in school.  They thrive in noisy rooms full of people, they are socially tuned to make best advantage of the entire school system, and that system is eager to reward their compliance.  Their communications skills allow them to create positive, supportive relationships with their peers, but most importantly, their teachers.  These uber-kids are like professional athletes.  They excel in an artificial environment (the classroom), and get rewarded for it handsomely by the people who did so well in education that they went back to run the thing.


As if every day at school stepping into a shoe designed for you wasn’t enough, they then get graduation where everyone gets to hear about this very abstract and specific version of excellence, for the same people, over and over again.  These are the students that I meet in high school who don’t really care what Hamlet’s motivations are and don’t think there is anything to actually learn about human nature in literature, but they do want to know how to get the A+.  Education isn’t self improvement for these people, it’s a flag they wave around for social advantage.

From an outsider’s perspective it feels at best patronizing and at worst like you’re getting your face rubbed in it.  If you see any awards that aren’t based on ‘academic excellence’ (whatever that means), they tend to be tertiary awards given as charity without any other criteria.  The best you can hope for is someone saying how hard you tried, but don’t be patronized by that pat on the head.  For the neuro-atypical thinkers who don’t work best in a classroom, but are learning all the same, there are no awards for all the books you read  (or wrote) that aren’t on the curriculum.  There are no awards for all the art you made that didn’t happen in class.  There are no awards for all the sports you participated in that didn’t happen under the hammer of a phys.ed. teacher’s critical eye.


My son’s grades look remarkably like mine.  When you get grades like that they tempt you to say fuck it to school, which I’m sure makes the neuro-typical people who deliver them feel very powerful.  Assessment for compliance.  Assessment for conformity.  Assessment for learning?  Rarely.  Sitting through graduation ceremonies only exacerbates that feeling (I didn’t attend any of mine).  I had a chat with my boy afterwards and reminded him that what teachers are willing to see in the very limited classroom environment is not in any way an accurate reflection of what he is capable of.  When you have the kind of intelligence that is very difficult to observe let alone quantify, part of your genius has to be nurturing it yourself.

All those neurotypical kids on their big cruise ship crossing the learning ocean have the benefit of a system designed for them, but many of them also forget that they’re actually on the learning ocean; the cruise ship becomes their whole world.  When they have to disembark in that glittering graduation ceremony of privilege rewarded, they are lost.  They didn’t learn anything for its own sake, they learned things for grades and accolades.  They struggle to find their way in a world that doesn’t always reward their privilege with success, though they’ll never forget that feeling of privilege and will seek it again and again for the rest of their lives.


I ended our chat with this:  embrace your difference, don’t surrender to their assessment.  And if you don’t want to go and watch them clap each other on the back for being privileged, then don’t.  It’s the dropouts and outliers who tend to invent new things and it’s the fighting spirit you develop in yourself getting beaten up by the school system that will make you strong when you don’t have to suffocate in it anymore.  Whatever happens, never forget that learning isn’t school.  Always be learning.