We emigrated to Canada in 1977.  Unfortunately, my parents weren’t really paying attention and moved us (an English speaking family from England) into Lasalle in Montreal, Quebec.  If you don’t know what was going on in Quebec in 1977, it wasn’t good for an eight year old English kid.  While we were struggling to adapt to a new country we’d also wandered into a nationalist revolution.  Bill 101 made it illegal for immigrants to learn in English.  Since that was my native language and I had no background in French, the provincial government told my parents I’d have to attend a french school and get dropped back two grades to accommodate my lack of language skills.


While that was going on, the kids in our predominantly French neighborhood had overheard me talking with my lovely Norfolk accent while walking home from school and had decided that I would be a great opportunity to express their Quebecois pride. Getting beaten up by half a dozen kids at once wasn’t any fun, but when they started bringing their german shepherd along to help, it was even less fun.  You’ll have to excuse me if I’m not enthusiastic about Quebec’s singular approach to immigrants.

Government letters arrived telling my parents that they had to move me out of English school or they would be charged and jailed.  My dad’s new job did backflips, opened up a branch office in Toronto and we escaped to free Canada in 1980.  I’ve had a soft spot for Ontario’s open arms approach to immigrants ever since.

@dougpete shared an article on Quebec’s math prowess this morning.  I have some strongly held beliefs about how they’ve managed this result that the article itself goes to great lengths to ignore.  While Ontario has what is described by many people as too many public school systems, Quebec has one, and it’s one that caters aggressively and exclusively to a single language supporting a single culture.  They don’t enjoy immigration and their provincial politics have backed that up since I was an eight year old way back in 1977.  If you’re looking  for a province that struggles to embrace multiculturalism, Quebec’s a fine example:


“Among the provinces, the greatest increase in the absolute number of police-reported hate crimes was observed in Quebec, where incidents rose from 270 in 2015 to 327 in 2016. This increase was mostly attributable to more hate crimes targeting Arabs and West Asians, the Jewish population and sexual orientation.”
– Stats Canada Daily: Police reported hate crime, 2016


I would argue that if you’re dealing with a less diverse population you’re dealing with an easier education process.  In addition to removing hard barriers like language and the various qualities of education in home countries, you’re also bypassing many of the less tangible complexities like cultural expectations around gender and religion.  These benefits are clearly seen in international education rankings where monocultural societies are much more willing and able to force compliance and efficiently produce results for standardized tests; standardized populations feed strong standardized results.  With no language barriers or cultural confusion, it pays to be monocultural in standardized testing.  Canada is exceptional in those results, especially considering how it’s a country built on immigration.  That we are able to produce these results even while working with diverse often ELL populations is astonishing.  Statistics show just how challenging trying to cover curriculum while also teaching the language of instruction is.  Stretching your education system to provide support for such a diverse population means you aren’t going to score as well on a standardized test because your students aren’t standard.

In addition to the diversity of their students, there are a number of assumptions made in that article that ignore the cultural landscape that has allowed Quebec to produce this outstanding mathematical outcome that is out of step with the rest of the country.  Under more extensive teacher training is this:


Teacher preparation programs in Quebec universities are four years long, providing students with double the amount of time to master mathematics as part of their teaching repertoire, a particular advantage for elementary teachers. In Quebec faculties of education, elementary school math teachers must take as many as 225 hours of university courses in math education; in some provinces, the instructional time can be as little as 39 hours.

That Quebec students receive much more support for post secondary than Ontario students is a matter of fact.  Quebec looks after its teachers in training by not financially crippling them with this long term training.  Expecting Ontario teachers in training to foot an Ontario sized bill for their Quebec length training only goes to highlight the fundamental differences between the provinces.  Quebec students pay more than a third less what Ontario students do for that university training, and so they are able to extend their training.  It’s little wonder that they are producing better results on this standardized test. 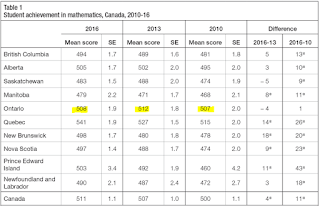 The article kicks off rather hyperbolically sounding an alarm for Ontario’s math’s results:
“That populist election cry resonated with Ontarians because Ontario students continue to lag in mathematics and were the only ones in the country to show no significant improvement on national tests from 2010 to 2016.“
Saskatchewan also has a dip in results and most of the other provinces were all within a couple of percentage points of their previous scores.  More importantly, Ontario led the results for English speaking Canada in 2010, 2013 and 2016, and even managed to slightly improve on it.  So this emergency in Ontario is based on the fact that we’ve always been leading in mathematics scores in English speaking Canada?  I hope everyone else catches up with us one day, but with the provincial government about to pull one of the top performing English Canada education systems to bits, I wouldn’t bet on it.


In researching this I came across some evidence that the Quebec of today isn’t as totalitarian as the Quebec I emigrated to in 1977.  This research on current Quebec schools summarized it this way:

“Quebec’s traditionally homogeneous French-language education system has undergone some radical changes over the past 30 years and continues to be shaped by public policies geared toward promoting French and openness to ethno-cultural diversity. The province has
come a long way and now compares favourably with other immigrant-receiving societies. Nevertheless, many challenges lie ahead. Among other things, the marginalization of some ethnic groups, and most especially that of the Black community, must be better understood and actively prevented.”


Perhaps Quebec is a bit less mono-cultural than I remember, but it still enjoys all the benefits of encouraging only primary language speakers into their system.  With that language of instruction time and energy freed up and with government subsidized education that allows their teachers to enjoy extended training without financially crippling them, Quebec is enjoying the results it deserves.  I’d rather Ontario didn’t try to copy them though.  As an immigrant myself, Ontario made me feel welcome in a way that Quebec didn’t, and I hope we’ll continue to do that for the people across the world, regardless of the language they speak, who come here to find a home.


The article ends up questioning its own bias on Quebecois superiority in math as it wraps up:


Quebec is markedly different when it comes to mathematics. Immersed in a French educational milieu, the Quebec mathematics curriculum has been, and continues to be, more driven by mastery of subject knowledge, didactic pedagogy and a more focused, less fragmented approach to student intellectual development. Socio-historical and cultural factors weigh heavily in explaining why Quebec continues to set the pace in mathematics achievement. A challenging curriculum produces higher math scores, but it also means living with lower graduation rates.


Perhaps the Ontario panic over mathematics could do with a bit of context, but I fear that won’t happen in the populist, reactionist times we live in.  It’s better to invent an emergency, compare ourselves to a system that couldn’t be more different and then try to imitate their results, than it is to continue to lead English speaking Canada in mathematics?  I sincerely hope not.


Other Research For This Piece:

Visble minority population by urban centre: https://www12.statcan.gc.ca/nhs-enm/2011/as-sa/99-010-x/2011001/tbl/tbl2-eng.cfm   Montreal barely makes the top 5 and is similar to Winnipeg in terms of immigration.  I couldn’t find language details, but Quebec’s focus on french is absolute.
https://www12.statcan.gc.ca/census-recensement/2016/dp-pd/hlt-fst/imm/Table.cfm?Lang=E&T=11&Geo=00
https://canadaimmigrants.com/canada-international-students-by-province-2016/