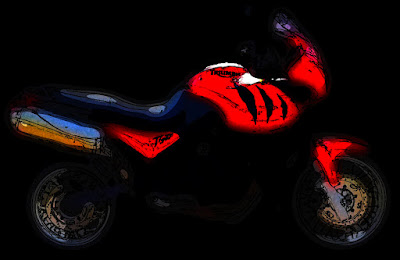 On our recent cross-Ontario ride we were stopped a number of times by people who were curious about the Tiger.  This is an eye catching, obviously modern looking bike with a Triumph logo, it prompted questions.  If they see a new ‘classic’ Triumph, most of the general public think it’s actually a classic.  They wouldn’t recognize the difference between fuel injection and carburetors even if it’s advertised on the bike, they just see an old machine.

The confusion of a new-looking Triumph (even though it’s 13 years old), and what they thought a Triumph should be isn’t too surprising, and I’m happy to fill them in on the triumphant return of the brand (it’s a good story), but it makes me question the modern bike colours and styles.

When we went to get the Tiger, 11 year old Max’s eyes bulged out of his head and I knew we had a winner.  Who makes a Lucifer orange tiger with stripes?  Triumph in 2003, that’s who.  When they weren’t churning out violently orange Tigers, they were putting out a wild assortment of colours.  Of course, this was before Ewan & Charlie jumped on their austere Bayerische Motoren Werkes R1200s and reset the aesthetic paradigm for adventure motorcycles.


Nowadays everything has to appear relentlessly purposeful and ridden by people who look like they’ve just landed on an alien planet.  Whimsy and fun are replaced by bikes that look like they come from Army surplus, and riders who just got decommissioned from the special forces.  No wonder people were eager to walk up and start a conversation with the guy and his son on their brilliantly orange Tiger that looks like it just popped out of Winnie the Pooh.  The public wants to be curious about motorcycles, but a lot of motorcyclists seem determined to make themselves as unapproachable as possible, and manufacturers have to cater to that attitude in order to sell.

Besides paint options there is also the issue of styling.  I find the compound curves and organic look of our 955i Tiger very engaging.  Whomever was designing Triumphs in the early Naughties did it pretty much exactly the same way I would have.  Since then Triumph, along with most other brands, have been chasing a more chiselled, hard edged look.  Lamborghini did a stealth fighter aesthetic after the Diablo with crisp, folded edges and it seems to have spread.  Between the muted colours, sharp edged styling and attitude driven rider styles, it’s little wonder that our whimsical Tiger had people approaching us.

I realize manufacturers have got to build to the tastes of the day, but I’m hoping there are a group of motorcyclists out there who aren’t so serious and miss those fantastic styles and colours.  If there are, there is hope that my whimsical Tiger won’t be so exceptional in the future.

https://rideapart.com/articles/what-the-color-of-your-motorcycle-says-about-you
Black motorcycles are dead sexy. No, really. Researchers at the University of Kentucky (March, 2011) found that in 36% of crashes involving a driver’s failure to observe a motorcycle and then turning into its path involved black motorcycles.


Looks like whimsical colours can keep you alive!  It might be time to bring back peppermint green and neon puce!

http://www.motorcyclenews.com/news/new-bikes/2013/june/jun0413-triumph-releases-new-colours-and-a-sprint-gt-special-edition/
As the years go by, the colours get more and more muted.


Triumph has a great sense of humour, just not with adventure bikes (those are very serious).