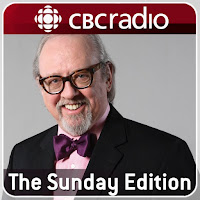 I was at Skills Canada’s National Competition in New Brunswick last weekend and had a rainy Sunday morning in Moncton to listen to Michael Enright on the Sunday Edition on CBC radio.  His piece on bicycles versus cars stressed the enormous gap between coddled, cocky cagers and the noble, spiritually empowered bicyclist.

As someone who doesn’t live only a bicycle ride away from everything I need (because I live in the country), I felt somewhat excluded from this urban (urbane?) discussion.  As someone who stays out of cars whenever possible and doesn’t ride a bicycle, how can I possible survive?  I’ve found a third way ignored by both cagers and the messianic bicyclist.

What is this magical third way?  It’s the motorcycle of course.  You enjoy that feeling of flying that the bicyclist on the radio refers to, but you do it without forcing a third lane of traffic everywhere you’re going.  Motorcycles actually reduce congestion and improve traffic flow and do so without demanding bike lanes in already overcrowded urban centres.  You don’t see motorcyclists riding into opening car doors like you see bicyclists.  Though they thrive in that environment, motorbikes aren’t only suitable for urban use.  People in suburbs and rural areas can still use them to cover useful distances quickly.  You don’t produce the spontaneous righteous indignation that bicyclists seem to be able to generate at will, but you also don’t show up to work smelling like sweat and spandex.


You aren’t suffering for choice when it comes to two-wheeled motorized transportation.  Want to buy a Canadian built, Canadian owned company’s bike?  The Can-Am Spyder offers older riders a stable, efficient platform to enjoy being out in the world.  Love Italian exotica?  Italy has more than a dozen current manufacturers of motorcycles producing everything from race ready Ducatis to stylish Vespas.  The Japanese produce an astounding range of bikes from the ground-breaking super-charged Kawasaki H2r to the futuristic Honda NV4 which manages to look like the off-spring of the batmobile and a stealth fighter while still getting better than 60mpg.

If you like the traditional look you can find modernized classic Triumphs and evolutionary Harley Davidsons that all use fuel injection, have anti-lock brakes and are both dependable and efficient ways of getting there in style.  There is a motorbike for every taste from subtle to gross.

The third way means you are paying road taxes to help build and maintain the roads you’re using (bicyclists don’t), and you’re not asking for your own lanes because you have no trouble flowing with normal traffic.  You never see a motorcyclist take to the sidewalk and abuse pedestrian space like you will with bicyclists because motorcyclists consider themselves road going vehicles all the time and not just when it suits them.  That kind of responsibility happens when you’re paying for the infrastructure you’re using.


The third way means that, like bicyclists, you have to share the road with distracted, idiotic cagers who barely pay attention to what happens beyond the air conditioned box they find themselves in, all while they burn copious amounts of gasoline moving themselves, four empty seats and a couple of tonnes of vehicle around with them.  It’s a dangerous business sharing space with these vain-glorious, self obsessed tools.

What do you get in return for that vulnerability?  You are present in the places you pass through, alive in the world.  You smell every smell, feel the sun on your back and arrive feeling like to you travelled through the world to get there instead of feeling isolated, superior and more than a little clueless.  The first time you lean into a series of corners and feel like you and your bike are one is a magical experience.  You can’t take on the spandex righteousness of bicyclists, but you can take comfort in knowing that you’re using way less of everything to get where the cars are going, and you’re doing it with a much bigger smile on your face.

The kind of defensive riding you learn on a motorbike (who is at fault doesn’t matter, you need to be responsible for the ineptitude of those around you) can’t help but make you a better car driver.  I’ve been unable to squeeze the statistics out of the Ontario MoT, but I’ll bet you a coffee and donut that if you compare any age group with G class car licenses and G and M (car+motorcycle) licenses, you’ll see a significant drop in collisions when they drive four wheelers.  You can’t help but internalize that kind of defensive mindset if you’re going to ride motorbikes for any length of time.  Bicycling isn’t a parallel to driving a car because you aren’t held firm by the same traffic flow and right of way issues, so bicyclist paranoia doesn’t translate to driving like motorcycle paranoia does.

You’d be hard pressed to find a more democratic vehicle than the motorcycle.  As a means of economic, efficient transportation, there is nothing better.  If you don’t believe me, look at any developing country.  The motorcycle is what allows many people who can’t luxuriate in the first world isolationism of the automobile a chance at mobility in the modern sense.

While urban cyclists find god and battle the soulless commuting automobilists on The Sunday Edition, I’ll enjoy my third way.  I only wish it was a consideration in the misery that is most urban commutes.  Rather than chasing utopian dreams of bicycle lanes in a car free city, why not consider a compromise that lets us immediately reduce gridlock?  Ontario could start by following the examples of more motorcycle friendly jurisdictions by allowing filtering, reducing insurance, offering more parking (easily done in unused areas of parking lots designed for three ton SUVs) and easing access into motorized two wheeling by supporting and encouraging training.  We’d see an immediate uptick in the efficiency of the roads we have now.

LINKS
Commuting by Motorbike is Better for Everyone
Mega-Mileage Scooters 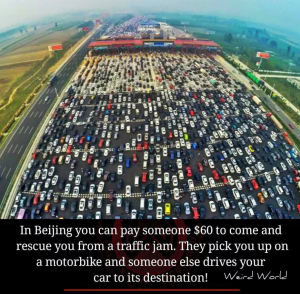 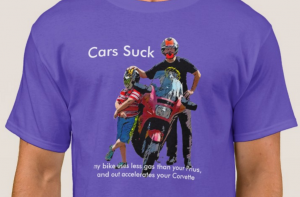