Reading often creates strange resonances.  Most recently the latest edition of WIRED struck a chord with Paul Theroux’s 1975 classic, The Great Railway Bazaar.  What could a travel book from the seventies have to do with a Twenty-first Century technology magazine?


Theroux was on a train trip across Asia.  In India he came across a taxi driver who did a brilliant job of looking after him.  After weeks on the road he found himself becoming desperately dependant upon this support.  I’ve read a lot of Theroux and he circles this theme again and again; the idea of how the ease that accompanies wealth leads to a kind of learned helplessness. 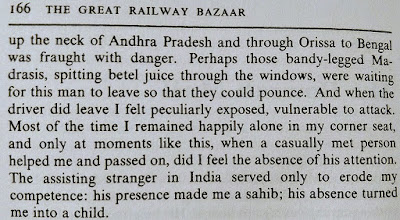 Way back in 1974 Theroux suddenly found his confidence eroded by an assistant too good for his own good.  Sahib is one of those words loaded with colonial weight.  In India it was used as a title of respect toward European men.  Theroux takes that supposed superiority and dismantles it with American anti-classist zeal, describing the wealthy people who came to depend on their servants as childlike in their helpless.  It’s an interesting twist.


In The Happy Isles of Oceania, Theroux lives the high life for a week in a luxury hotel cottage used by the PGA.  He becomes frustrated at how isolated, unproductive and paranoid he felt by the end of it, even though his every need was taken care of.  The next week he tried to live on one thousandth the money, or four bucks a day.  By the end of that week spent living rough on an empty beach and kayaking about, he felt empowered, productive and alive.  What most people do with money (having other people serve their needs) often leads them to a state of childlike dependence.  Theroux is often tempted by it and then hates himself for doing it.

In WIRED this week the Angry Nerd goes on a rant about Google’s gmail predictive text technology that keeps jumping in front of you as you’re trying to write an email.  No, I’m not a fan of this use of AI, I can type quickly and it breaks my flow.  There is a function for AI in writing, but leaping in front of composition, or worse yet, replacing the writer entirely, isn’t it.  The Angry Nerd is especially worried about the inflationary nature of this interference:


“Once we embrace the personalized simulacrum, we start letting AI speak for us. Soon we let it speak as us. It’s … almost soothing. Frees up time. I’m nearing inbox zero! Ah, Grandma just checked in. She’s not feeling well. I’ll select “Oh no!” Yes. She’ll care that I care. And she’ll reply, so kindly, so expediently: “Thanks so much!””

Before we know it the ever so helpful, never resting artificial intelligence is speaking for us, replacing our voice in our most intimate relationships.  This echoes Theroux’s eroded competence, but the way AI is doing it is much more insidious than the old fashioned human servant.  The AI never rests, is always there and is always looking for ways to step in front of you and help until you become so atrophied that it assumes your voice.  Worse still, the companies peddling these virtual assistants aren’t interested in small scale adoption, they want everyone to have the luxury of a virtual servant.

Between the industrial scale of adoption and the dissemination of personal electronics into all aspects of our lives, it’s only a matter of time before we’re all as atrophied and helpless as Theroux feared.  If we don’t start setting limits on AI to prevent it replacing human being, we’re in for a rough ride.  Don’t expect the Silicon Valley giants to do what’s best for humanity.  They’ve already proven that profit comes first. They’ll happily create a society of illiterate social idiots as long as the money keeps pouring in.


Now, more than ever, we need some Asimovian laws in place to moderate the introduction of artificial intelligence.  We’ve already run into problems with digital technologies in terms of news and politics.  If we leave artificial intelligence to develop without ensuring it isn’t atrophying human potential, it will relentlessly drive us into a dystopia we’ll all be too helpless to recognize, let alone escape.