I’m getting suspicious as I ride out of Scottsdale into the desert and see signs saying I’m entering Phoenix.  My son and I are riding in December, not something we usually achieve in Canada.  Our rental is a Kawasaki Concours14 from AZride.com.  We pull over into a gas station to pick up some water we needed anyway then turn around and start heading the right way.  I’m dataless and gpsless and we’re heading deep into the mountains a couple of days after Christmas.

Soon enough we’re out of the urban sprawl of Phoenix and feeling the cool desert breeze as we head north on Highway 87 through scattered saguaro cactus.  I have that realization I often get when I haven’t been in the saddle in a while: wow, do I love riding a motorbike!  The vulnerability, the sensory overload and the speed conspire to make a rush of adrenaline that opens you up to this overwhelming experience even more.  I’ve tried many things, some of them not particularly good for me, but nothing, and I mean nothing, feels better than disappearing down the road on two wheels.

Once clear of traffic lights I immediately get lost in the winding corners and elevation changes of the Bush Highway.  The bike is leaning left and right, feeling weightless under me and eager to spring forward at the twist of the throttle.  My twenty year old Concours at home under a blanket in the garage does a good job with a thousand ccs, this newer fourteen-hundred cc machine is a revelation, even two up.

We leave the traffic lights of the city behind and immediately find ourselves amongst ranches and desert aficionados hauling everything from ATVs and Dakar looking off-roaders to boats and bicycles.  It’s the end of December but it’s still 16°C on the digital dash and people are making use of their time off after Christmas.

The Bush Highway turns back toward the sprawl, so after crossing Usurer’s Pass we drop down to Highway 60 in Apache Junction having bypassed miles of Mesan strip malls.   Highway 60 is empty and arrow straight.  What would you do on a 160 horsepower bike you’ve never ridden before?  I do it.  In what feels like moments we’re leaving the desert floor behind us and climbing into the Superstition Mountains.  I feel like I’m sitting on a Saturn V in a full stage one burn.

We’re both wearing fleeces and leathers and it was comfortable on the warm desert floor, however the mountains ahead are looking mighty foreboding.  We started our ride in Scottsdale at just over a thousand feet above sea level, but the road to Globe is going to take us up to almost five thousand feet and we can feel the temperature plunging as we climb.

I’ve wanted to ride this road to Globe since driving it in a miserly Nissan rental car years before.  It’s twenty five miles of being on the side of your tires.  You’re only upright as you’re switching sides.  The temperature drops and snow begins to appear in shady patches on the side of the road.  We surge ever upward in a cocoon of still air.  The Concours’ fairing is keeping the worst of it at bay while that mighty engine makes short work of any moving chicanes in front of us.  Would I like to ride this road on a sport bike?  Sure, but the big Kawi makes it easy to enjoy two up with luggage.

As is the way with winding roads I get to the end of them in a trance, and always earlier than I think I should.  By this point we’re both cold regardless of what we’re wearing and fairings.  The outside temperature in Globe is 4°C.  We jump off the bike at the Copper Bistro and stamp some feeling back into our legs.  Walking into the restaurant we’re met with the incredulous stares of the locals.

“Kinda cold to be out on a bike, ain’t it?”
“We’re Canadian.”
“Ahh…”
The old timer at the bar gives us a look like he understands why we’re out but still pities us for doing it.  We can’t help being what we are.


We warm up to a damn fine burgers and fries.  Max likes the splotches of copper made into art on the wall.  Globe is home to one of the biggest copper mines in America and the locals have that toughness that you see in people who don’t sit at a desk for a living.  The Globe Police department comes in for lunch, men with no necks who look like they stay in shape by managing the miners on Friday nights.  You wouldn’t want to mess with these guys.

Warmed up, we’re back on the bike and filling up before ducking out of Globe on the 188 into the Tonto Basin, a two thousand foot drop down from where we had lunch.  In warmer weather the 188 is busy with boat haulers heading to the lake behind the Roosevelt dam, but today the road is ours.


We wind down into the Basin and see the big saguaro cactus return.  The temperature is back into double digits and we’re at our ease following the twisties on an empty road.  We meet the odd bundled up motorcyclist coming the other way and get the universal wave, but otherwise it’s wonderfully quiet.

We pull into Roosevelt Dam for a stretch and a drink of water before following 188 to its end at Highway 87.  Our animal sighting luck kicks in at this point.  As we’re kitting up to leave the dam a bald eagle flies over it and down the Salt River looking a scene out of a movie.


By this point it’s mid-afternoon and we’re both wind blown, dehydrated and a bit achy from the swings in temperature, and I’ve got the trickiest part of the ride coming up.  I’ve driven the 87 in a car and know what’s coming.  We pull up to make sure our ATGATT is airtight and for me to get my head on straight for a high speed decent on a fast two lane highway down the side of a mountain range.


The first time I drove the 87 toward Phoenix from Payson I was astonished to see large trucks towing full sized boats blow past me at better than eighty miles an hour.  This road moves and none of it is straight.  Some of the corners feel like they last forever and they all generally lead straight into another corner.  For a guy from Southern Ontario, home of boring, straight roads, this isn’t business as usual.

The Concours surges down the highway and I drop into the flow of traffic.  Leaning into corners for up to thirty seconds at a time has me concentrating on perfect arcs and not being happy with the results.  How often do you get to describe high speed arcs for an hour at a time?  I’m feeling rusty, frustrated and want to find a way to smooth out my mid-corner corrections.  Fortunately I’d been reading Total Control by Lee Parks on Kindle and found his advice about one handed steering to be the solution to my broken corners.


Lee’s advice is to only push on the inside handlebar when in a corner.  This causes the bike to counter steer deeper into the corner with very little effort and much finer control from the rider.  I wouldn’t normally get much of a chance to play with this on Southern Ontario roads but Arizona was made for this sort of thing!  That one piece of advice got me down the 87 with significantly fewer sore muscles.  By the time I was getting to the bottom of the Superstition Mountains I’d had many long corners to test and refine my technique and my arcs were more precise and less meandering as a result.


We roll back into Scottsdale afternoon traffic like two cowboys who have just time travelled back from the Old West.  The suddenly onslaught of traffic is a bit overwhelming.  After a last fill up (the gas station attendant has a starry eyed look at the bike) we return the Concours to AZrides and get checked out in a matter of seconds.

The rush hour drive home in the rental SUV is tedious and slow, but that blast in the mountains cleared out the cobwebs.  The ZG1400 made an interesting comparison with my ZG1000.  I found the newer bike a comfortable and agile machine, but the whining of electronics didn’t thrill me, and the tightness of the foot controls were awkward.  Because this is someone else’s bike they made choices (like ridiculously high risers) that I wouldn’t have.  None of these things spoiled the ride, and the biblical power of the ZG1400 motor is something that needs to be felt to be believed.  This taste of ZG1400 makes me wonder how I’d fettle my own.  Thoughts of a ZG1400 swirl in my mind as I roll along with the commuters into the setting sun.

Check out this piece as published in Motorcycle Mojo.

Photos from the helmet cam.  It was supposed to be video but I didn’t set it up right.  I guess I’ll have to go back and do it again.  I’m most sorry you can’t hear the sound of a ZG1400 engine singing in the tunnel… 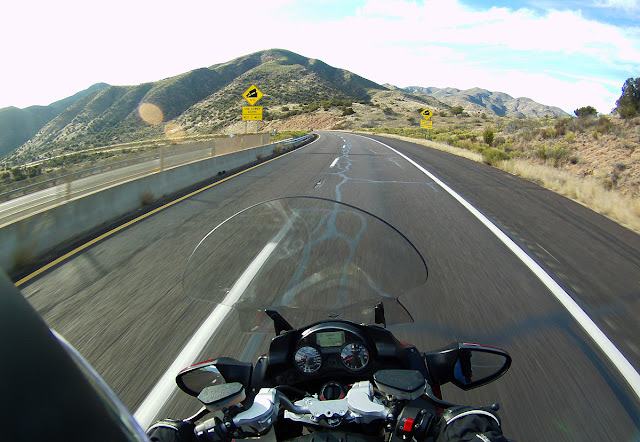 A bit less: the Superstition loop with a jaunt up to the interesting bit of Hwy 60 – though mileage wise this is pretty close to the full monty below. it doesn’t include AZride’s Bushy bypass…

Getting to the twisty bits (hitting the interesting bit of 60 before coming back):

The full monty: what I would have aimed for solo