Skip to content
I’m thinking about a final trip before the snows fly.  I did Georgian Bay early in the perilously short Canadian motorcycling season, but now I’m thinking about a circumnavigation of Huron to end it.  I’ve never been to Northern Michigan before and I’d be passing right past where Hemingway spent his summers as a child.

The trip is roughly 1600kms.  If I struck north out of Elora I’d aim for the 1:30pm Chicheemaun Ferry out of Tobermory but instead of heading right around Georgian Bay I’d swing left toward Sault St. Marie.  Overnighting in the Hemingway-esque Petosky puts me about half way around.  I’d strike south through Northern Michigan the next day before coming through Sarnia and cutting back across Southern Ontario to home.

It’s ~776kms to Petosky, or about eleven hours of riding.  A normal departure and then the 1:30pm ferry puts me in Manitoulin at about 3:30pm.  That would get me into Petosky well after dark, which isn’t the way to do it.  There is an 8:50am ferry that puts you on Manitoulin just before 11am.  That would put me in Petosky around dinner time.  It’s a nicer fit, but it would mean a 5:30am departure, which would be brisk.  On the upside, the only riding I’d be doing in the dark would be in Southern Ontario on familiar roads, and once I’m on the ferry I could catch up on the sleep I missed.

After overnighting in Hemingway’s summer retreat, it’s a straight shot with no ferries back to Ontario.  The ride back from Petosky could be done in six and a half hours and 673kms.  The 8 hour version with a few hours next to Huron would be the preferred route.  A nine to six day with an hour lunch would get me home well before sunset.

Doing it backwards might work better.  After spending the night in Petosky, I’d be aiming for a 3:50pm ferry to Tobermory where I’d be riding south on the Bruce Peninsula at 5:50pm.  I’d need to be on the road from Petosky by 9am to make the Ferry.  Backwards might be better…  You’re looking at 7:20am sunrises to 6:20pm sunsets in mid-October around here, so the last bit home would be in dusk and dark. 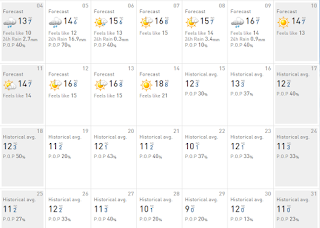 I don’t mind riding in cool temperatures. The Concours is built for it with a good fairing, and sitting on it is like sitting on a volcano.  With proper kit even single digit temperatures are easily dispatched.

The trick will be to get a couple of days free to go ride through Hemingway’s Michigan the way he’d have done it himself nowadays, on a motorbike.  I couldn’t find any motorcycle specific quotes, but I know he’d approve of the method of transport…