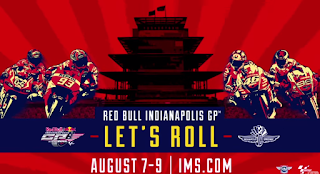 After roughing it out we’ve finalized plans to ride down to Indianapolis to see the practice day of the Indianapolis MotoGP race.  It’ll be a chance to see a legend like Valentino Rossi in the flesh doing what he does.  It’ll also be an opportunity to wander the paddock and watch everyone setting up their machines.  I’m aiming to come away with a Sam Lowes t-shirt and some Rossi paraphernalia.

We couldn’t do the whole weekend due to other commitments, but hitting Indy on the Friday means it isn’t as busy and costs almost nothing (twenty bucks to get in!).  We’re going to ride down Wednesday and Thursday and then stay in a Hampton Inn by the track on the Thursday and Friday nights before heading back on Saturday.  We should be home Sunday afternoon.

Since we’re in town Thursday and Friday night we’ll be looking for some bike related magic happening around the day at the track.  Downtown Indy’s Motorcycles on Meridian is happening on Friday night and we’ll be there.  I’m looking forward to a brief wallow in American motorbike culture before heading out on Saturday morning.

I’ll watch the qualifying and the race when I’m home the week after, but I’ll also know what these bikes sound and smell like, which is magic!

My son Max and I are all set to go on my ’94 Kawasaki Concours, but it got me wondering about what I’d take out of the new batch of Kawasakis, so here’s a list!

I have a ’94 ZG1000 Concours.  The new ones are monsters by comparison, but it’d be interesting to ride a team-green bike down to the MotoGP race, even if they aren’t involved any more.  The new Connie is a massive 1354cc machine.  It would be interesting to see what Kawasaki has done with my beloved Concours over the past twenty years.

What do you say Kawasaki Canada, got a new Concours you’d like ridden?

A small part of me misses my Ninja.  Riding two up down to Indianapolis means looking for a Ninja that can handle Max and I, fortunately Kawasaki makes just such a Ninja!

The Ninja 1000 is a capable long distance sport touring bike with the emphasis on sport.  It would have no trouble getting Max and I down to the Speedway, and it would do it in MotoGP fashion.

Last year I test road the old version of the Versys 1000 and really enjoyed it.  The new Versys is supposed to be better in every way.

My buddy Jeff (a Yamaha Super Ténéré rider coming down with us) would take to this bike like a duck to water.  If Kawasaki Canada were to set us up with a pair of these they might convert a Yamaha faithful!


We’re more than ready to head south on my trusty Concours, but it’d be interesting to ride something green and new into the MotoGP at Indy and make the place a little greener.

T-minus one week until we’re on our way south!