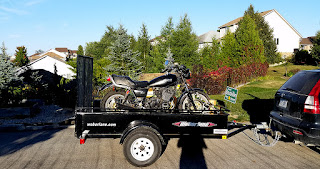 Buddy Jeff gave me a hand getting the XS1100 home the other day; he’s an enabler.

Getting it on the trailer was a bit tricky as the front calipers were seized.  A couple of whacks with a rubber hammer loosened them up enough to get the wheel rolling.  It took three of us to get it up onto the trailer – it’s heavy (600lbs), had mostly flat tires and was still grabbing the brakes, but we finally got the job done.  We ended up settling on $400 as is, which gives me a working budget of about $1500 to get the bike back on the road.  It think it’s doable.  The only other one like it for sale at the moment is asking $3300.  After looking at the bike again critically before agreeing to buy it, it’s in surprisingly good shape for what it has been through. 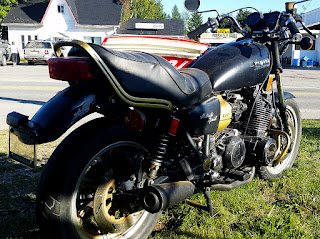 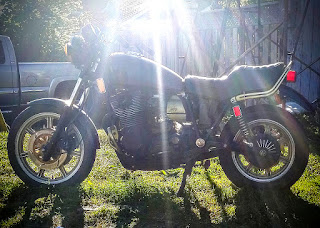 Once home we had a victory beer after wrestling it off the trailer.  A bit later I had a go at it with a garden hose and some S100 cleaner.  The ride over had blown away most of the cobwebs, but the rest of the bike is quite astonishingly clean considering it has been sitting outside.  The S100 also has a corrosion inhibitor, but I also soaked the bike in wd40 in preparation of trying to remove any fastener on the thing.

Trying to muscle the 600+ pound bike into the garage earned my my first Yama-scar, but I eventually got it nestled in there.

In other news, here’s something to know about bike ownership in Ontario (and probably elsewhere): if you’re buying a bike off someone who bought it and never transferred ownership to themselves, you need to make sure you’ve still got chain of ownership intact.  This means either a piece of writing from the legal owner saying that the bike was sold to the intermediary or a signed ownership.  The kid I bought the bike off had neither (can’t find them).  He’s looking.  More updates to follow.

In the meantime, the history of this old bike is long and storied.  I’m the fourteenth (!) owner (almost).  It’s a 1980, not a ’78 as the kid selling it thought it was.  In the early ’80s it went through three owners before finding itself at Norwich Collision Service in South West Ontario in the spring of ’82.  The crash owner had owned it since Christmas and had probably been on the road for a few weeks in the spring before spilling it.  Idiots buying bikes too powerful for their experience level isn’t a new thing then.  He got the bike back from repair and immediately sold it.

After the n00b crash and the repairs it got picked up by a guy who owned it for six years.  He then sold it on to a series of owners through the ’90s and zeroes, the longest being eight years by a guy in Halton.  The last legal owner was a guy from Stoney Creek in 2009.

Whoever said the Ontario vehicle history was boring or a waste of money?  This one reads like a Jane Austen novel!

I’ll update the ownership situation as I hear more, hopefully it’ll be resolved by the end of this weekend.  I’ll hold off on working on the bike until I know I can own it, that seems prudent.