The intention of Dusty World is to work through ideas I’m having around teaching.  Since I’m a technology teacher, a lot of those ideas are tech-focused.  This week, after years of forced contracts and an unbelievably rough round of negotiation, my union has voted to accept an austerity contract that was bargained virtually at gun-point.  Since our last bargained contract we’ve been wage reduced, had benefits striped and work load increased.  By the end of this contract we’ll be looking at more than a 10% reduction in take home income when inflation is considered. 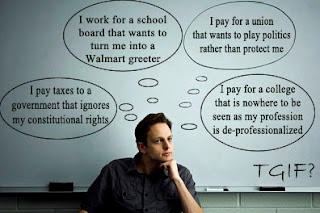 The politics of the agreement aside, what does something like this do to my work environment?  Instead of focusing on pedagogy and excellence in learning, I find myself performing damage limitation.  Knowing that my employer focuses on finances rather than pedagogy is difficult to hear, but when the school board association walks into negotiations demanding dictatorial control over teacher time, stripped benefits and wage reductions, you can’t help but come to that conclusion.

Teaching is a human activity, and I am the human face at the end of a large, faceless, increasingly politically driven bureaucracy.  I’m supposed to be teaching my students how to manage digital technology so it doesn’t manage them, but increasingly I find my time being spent trying to protect my students from a system intent on doing less for less.  When I’m cobbling together 8 year old computers just to give students a chance at hands on learning, or trying to calm agoraphobic students in overcrowded spaces, or sourcing fans to keep the classroom temperature from boiling because we have thirty two old machines huffing away in there, quality of instruction is obviously not the goal.

The education system goes through changes in focus all the time, and the effectiveness of learning waxes and wanes depending on the political climate. I began teaching in Ontario in 2004 and my early years were in a system in recovery from Mike Harris‘ “unprecedented disinvestment in public education, which destroyed a historical competitive advantage in the space of a decade.”

Ontario’s public education system, under reasonable management, saw huge steps forward in terms of effectiveness.  Before the cuts began in 2012, Ontario’s education system was top 5… in the world, and, with BC, led Canada up the charts.  You can imagine how satisfying it must have been to work in an environment like that.  I’d often find myself developing lessons or reading about teaching techniques on a Saturday night.  I didn’t take a summer off in my first eight years of teaching, taking many additional qualifications (at my own expense) and teaching online to expand my skills.  With the amount of time I spent at it, I was probably dancing with minimal hourly wage, but I didn’t care because I threw myself into my profession and my profession looked after and encouraged me.
That sort of intensity appeals to me, I enjoy the challenge and get a lot of satisfaction out of doing a difficult thing well, but it depends on support.  Anyone doing anything well does it because they have good support around them.  If you don’t believe me watch any professional sport.  When you suddenly find yourself losing common sense arguments around class sizes based on safety and access to tools, you start to wonder whether going all in is that productive, or healthy for you.

It was nice to start my career in a time of such positive pedagogically driven education.  I got to do that because the teachers before me suffered through a decade of cheap nastiness.  We’ve swung back to the cheap nastiness now, but rather than fight it we vote for it.  I was willing to fight for better, but the vast majority of secondary public teachers are ok with less.  How will that translate to their work in the classroom?

I’m going to have to reconsider my survival strategies.  If I throw myself all in and then get slew footed by a lack of support, I tend to get emotional about it.  Rather than do that, perhaps a little distance is the better way; a less passionate, more circumspect approach to the classroom.  How do you think that will play with students?

If I want to test myself by finding excellence in what I do, the Ontario classroom isn’t where that’s going to happen.  In 2015 it has become a political wasteland of compromise and an excuse to do things cheaply for political gain.  I’ll do what I can to protect the students I am given, but the goal isn’t excellence in learning any more, it’s do less with less.

Fortunately, I have a lot of hobbies.  I’ll find other aspects of my life to throw myself into with abandon.