Motorcycle insurance in Ontario has always thrown me for a loop.  To emphasize that strangeness the Toronto Star recently printed a searing indictment of Ontario’s motorcycle insurance policies.   In it a rider who has been out west (California and B.C.) comes back to Ontario to experience the disastrous way Ontario does things.  He suddenly finds his $2-300 a year insurance rates multiply by ten to well over two thousand dollars a year, for the same bike!

In breaking down Ontario insurance he discovers some discrepencies that appear to be practically criminal:

So, you’re insured on a new bike no matter what, but you’re only paid as little as possible on the back end.  That’s the kind of quality fairness that exemplifies Ontario’s approach to insuring motorcycles.

When I called in to see what a second bike would cost to insure I was told that another bike would essentially double my insurance.  I pointed out that I could only ride one at a time and having two would mean both would have fewer kilometres than a single bike.  They just smiled and said that’s the way it is.  If you read that Toronto Star article you have to be asking yourself, “why is this the way it is?” 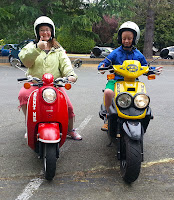 Last year we went out to B.C. and discovered that my wife could easily rent a scooter with a G license and go for a ride around Victoria.  We had a fantastic time and she came closer to considering two wheels as a mode of transport, but not in Ontario.

To ride a scooter in Ontario you need to take courses and work your way through the graduated motorcycle license.  Ontario is determined to keep people off two wheels even if it is a much more efficient way of getting around.

The block is systemic, from insurance practices that are out of sync with the rest of North America (and the planet) to governmental regulations that are more focused on milking citizens for license money than they are on offering access to an environmentally friendly, efficient and exciting way to get around.  Ontario couldn’t help but become more efficient with more people hoping on scooters and motorbikes to get where they’re going, but that isn’t the vision.  Ontario isn’t about environmental consideration, efficiency or excitement.

How un-bike focused is Toronto?  On my recent trip down there I could use HOV lanes and park for free downtown, but the bike parking area was virtually empty.

After reading that Star article I’m thinking that Ontario is anti-motorcycle.  The government supports an insurance industry out of whack with the rest of the world and throws as many blocks as it can at riding.  Ontario may be the most over licensed and expensive place to insure a bike in the world.

Below I looked up costs randomly in the US and the UK and Ontario is way out of whack with the the results.  If I lived five hundred kilometres south of here in urban Harrisburg, Pennsylvania (instead of in rural Ontario), I’d be paying about $295 Canadian for my insurance this year (that’s with equivalent policy).  I currently pay almost $900 a year on a twenty year old bike that I bought for eight hundred bucks.  A second bike in PA would cost me an additional hundred bucks, so I’d be paying about $400 a year for both.  In Ontario I’m paying three times that.

When I first started riding I considered a new bike for safety reasons.  When I requested a quote on a new Suzuki Gladius (a 650cc, mid sized, standard motorbike), I was quoted at about $3000, but most insurers just refused to offer coverage – this on a guy in his forties, married with auto and home insurance and a family.  Had I been in England I could have quickly been insured with equivalent coverage AND road support and bike transport in a breakdown for about $950 Canadian in my first year of riding.

My buddy in Japan got back to me – he pays $161 a year in motorcycle insurance… in Japan, one of the most expensive places to live in the world!

Just to torture myself I got a quote from Progressive as if I lived in Harrisburg, Pennsylvania – my stats, my bike.  The cost for basic insurance was $75 a year.  To get Ontario equivalent insurance it went up to $226 a year.

Are you feeling the love yet?

Think it’s expensive to live in the U.K.?  Not if you’re insuring a motorbike.  MCN’s site has a listing of new motorbike insurance costs (on the right).  A new Gladius in Ontario will cost you well north of three grand to insure new if you’re a new rider and assuming you can find someone to insure you at all.  The quote on the right is full insurance with more bells and whistles than the Ontario minimum including road side assistance and bike return in case of a breakdown.

What is the average cost of motorcycle insurance?

“Drivers above the age of 25 with a good driving record usually qualify for good prices. Combine those factors with liability only coverage and a touring bike and you are looking at $200 to $500 a year”  – Ha!  Not in Ontario
“You can reduce your rate further by purchasing motorcycle insurance through your auto insurance carrier, owning a home, having good credit, and taking a motorcycle safety course.” – I have all those things (auto, house, good record, good credit, a safety course) and my auto insurer wouldn’t touch me. They said to come back after I’d been riding for a few years.