Trying to get parts in is never easy in Canada where no one likes to get their hands dirty.  It’s even harder during a pandemic.  The worst I’ve seen so far is Canadian Tire, who are a complete wreck.  Their web-page barely works and their online ordering system is in shambles.  It turns out aiming for the lowest prices on the cheapest Chinese made goods in the stingiest way possible doesn’t make for a resilient response in an emergency situation.  I’ve yet to pass by the local store without a massive row of annoyed customers standing in line out front of it (I’ve yet to bother going in), and the one attempt at ordering a simple, in-stock item has resulted in weeks waiting.  Don’t go to Canadian tire virtually or in person, they can’t handle it. 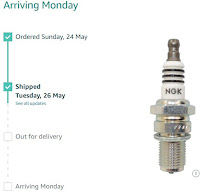 Amazon was also a mess early on in this with orders sometimes taking up to three weeks to arrive.  They seemed to improve recently when I actually got an order the same week I made it, but they still aren’t anything like as efficient as they once were.  I just ordered some spark plugs for the Triumph on Amazon (once you’ve got the tank off you want to do all the servicing because it’s a bit of a faff to get in there).  Canadian Tire didn’t have them or won’t let me in to find them.  That Amazon order sat there unresponsive for 3 days before it shifted to ‘shipping’, but in the 24 hours since there are no shipping updates and the shipment is still untrackable. 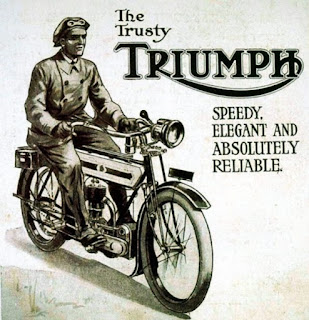 So, trying to get parts during this slow-burn pandemic sucks right?  Not always!  The other day the trusty Triumph Tiger actually stalled on me at a light.  I looked over every I’ve done on it (which is a lot) and realized I’ve never done the fuel filter, and I’ve put over 25k on it since I’ve had it.  If the Tiger is idling low and stalling on idle fuel starvation from a way-past-due fuel filter is a likely culprit.  But oh no, it’s a pandemic, I’ll never find parts!


The trickiest part was actually finding the fuel filter.  After searching around fuel lines under the tank I ended up looking in the Haynes manual only to discover that the fuel filter on a 955i Tiger is *in* the fuel tank.  This fully submerged fuel filter sits behind a panel on the side of the gas tank. 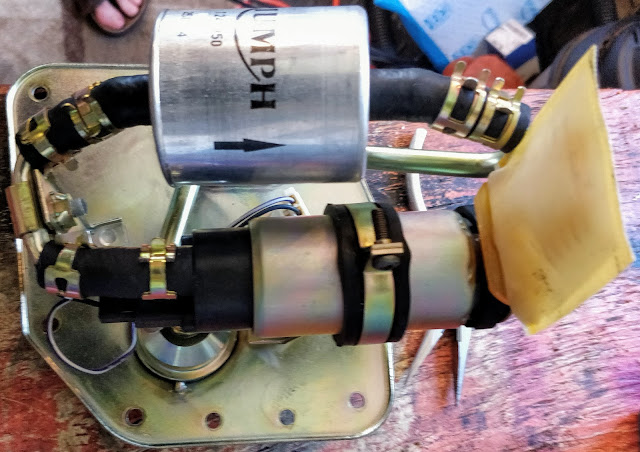 Finding a fuel filter for a 17 year old European motorcycle during a pandemic should have been a nightmare, but it turned out to be the easiest thing I’ve done parts wise, maybe ever.

Inglis Cycle in London is 140kms away, but they’re still my local Triumph dealer, so I fired them an email asking if they had what I was looking for.  For over ten years from the late ’90s to the mid zeroes Triumph used the 955i engine in the majority of their models, and they all used the submerged fuel filter in the gas tank, so they aren’t uncommon. 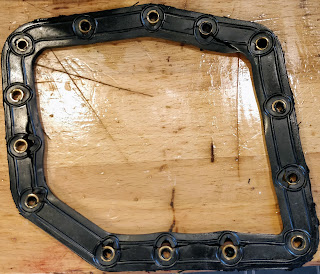 Within a couple of hours Ken at Inglis had emailed me back.  After removing the filter assembly from the tank I discovered a pretty beaten up gasket with multiple rips, so I asked if they could add that in with the filter.  Ken had both the filter and gasket in stock and said he could ship it out to me for $15.  Considering it’s a 280km round trip that would have taken me most of a day, fifteen bucks didn’t seem bad.  I thought that meant postal service and a week long wait.  The box showed up the next morning via a courier.  If you’re looking for quick, capable service during a pandemic, Inglis Cycle has their act together.


So the fancy gasket and new filter all went in flawlessly within 24 hours of ordering the parts, but I’m still stuck without a bike because I can’t seem to find anyone to safety the Honda and the spark-plugs I’d ordered from Amazon two days before I even began emailing Inglis are still in the ether.  The moral of this is I should have just ordered the spark plugs from them too and cancelled Amazon and their inconsistent service.  The other lesson learned is that once you find dependable service during a social distancing slow down, make sure you reward it with your spending power.