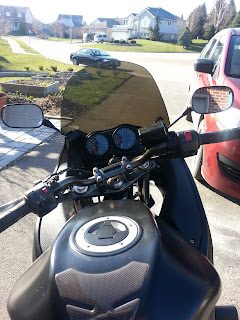 I’ve been on the bike every chance I’ve been able to get the past few days.  My longest ride was an hour and ten minute look over to where I used to live and back again.  Yesterday, making use of our last warm, rain free day before the temperature drops and frozen mud returns, I was out and about north of town.  I’ve been trying to get my shifts smoother.  When I’m gearing up I’m finding the bike plunging going up gears because the revs are so high and the engine drops off revs so quickly.  You need to give it a touch of throttle between bringing the clutch in and engaging it again to match engine revs to road speed.  It’s tricky.

I’ve gotten out of the habit of dropping the clutch in the middle of a corner, making those much smoother, and I’m remembering to turn off the signals much more.  Only once or twice did I forget and have to do it after the fact (usually after tearing up a road after a good turn).  The roads are cleaner and less sand covered, so I’m less worried about washing out in corners.  I’m still startled by how much power the bike has.  You have to hang on tight if you wind it out.
On my way back home the gas light finally came on.  162 miles on that tank (261kms?).  It took $16 to fill it with the highest grade gas I could find.  After I’ve done the plugs and cleaned the fuel system, I think I can get that over 300kms to a tank.
The real excitement came when I pulled into the gas station for my first fill up.  The premium pump was empty so I went to pull in.  Just then a woman in an old Taurus started backing into the same lane, so I stopped quickly.  So far so good, except her angle is all wrong and she’s driving right for the curb the gas pump is on.  She starts to pull forward so I assume (wrongly) that she is doing a 3 point turn and leaving.  Instead, she starts backing up again.  I haul on the brakes hard.  This time I can’t get my legs down in time and drop the bike, still running, my hand locked on the front brake and clutch.  Rather than hit the kill switch (and because I’m in embarrassed shock), I try to dead lift a 400lb Ninja back onto its feet.  I didn’t do it the first time, the adrenaline did it for me the second time (I’m a big guy).  I got her back on her wheels, still with the front brake and clutch in.  The woman in the Taurus has since backed up again because she went up on the curb and is trying to back into the slot again, except she goes over the curb a third time, then a forth time.  She finally backs it up into the slot back from the one I was trying to pull into.

The guy filling his truck makes eye contact with me and shakes his head.

I walk the bike up to the pump only to discover it doesn’t work.  Excellent.  I end up walking it over to the next lane and the other premium pump and finally get to fill up my new bike for the first time.  The ride home had me second guessing everything I was doing.  After a nice ride I was shaky.  Later that night my right arm feels tight, I think I pulled something deadlifting a 400lb Ninja out of the way of the most incompetent driver I encountered on that ride.  On the upside, at least she didn’t kill me driving down the road, and I can now say I’ve dropped my bike, picked it up and gone on.  Thank goodness the guy before me put frame sliders on it, no damage done (other than to my pride).