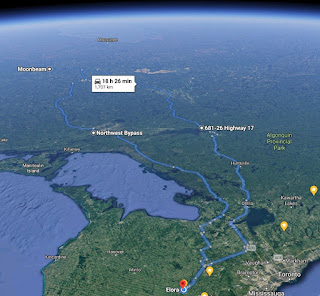 The mighty Wolfe Bonham did a Moonbeam run this year as a part of one of his mega well-beyond an Iron Butt long distance rides.  I just popped it into Google maps and it happens to be a perfect first Iron Butt distance from home, and all in the province.


The starting Iron Butt is the Saddlesore 1000, 1000 miles in 24 hours.  They have a metric equivalent Saddlesore 1600 kilometre ride too.  The suggestion is to do a distance that can’t be short cutted for credibility’s sake.  Riding from Elora to Moonbeam and back is always going to be over 1600kms, no matter how you do it.  Another benefit is that by going up on Highway 11 through North Bay and back through Sudbury and on the 400, I won’t be riding the same route twice. 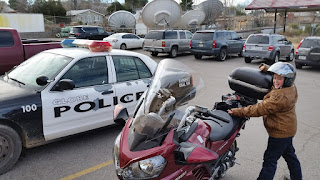 The Tiger has become fragile, so I’m jonesing for a long distance weapon, not that the vibey and exposed Tiger was ideal for that, but it’s what I had.  A few years ago Max and I rented a Kawasaki Concours14 for a ride in the Superstition Mountains near Phoenix, Arizona, and it was a glorious thing.  That Connie was a first gen C14, the newer ones have one of the highest load carrying capacities of a modern bike – so big that they could carry Max and I two-up again.  Another thing about getting back into Connie ownership (I used to own a C10), is that I’d have an excuse to frequent the Concours Owners Group again. 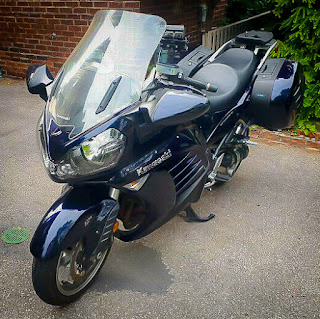 There is a low mileage (31k) 2010 current generation C14 for sale in Toronto with some cosmetic damage and a dodgy windshield.  I can sort out the niggles, and then this thing would eat miles like nothing I’ve had before.  There is a strange lack of Kawasaki Heavy Industries motorbikes on the Iron Butt finisher’s list (Honda has six times more bikes, BMW over eight times more).  I want to represent!  I’ve owned more Kawis than any other brand to this point, so it’d also be coming home to team green.


This particular one is blue instead of tedious grey (Concourses tend to be very conservatively coloured), which appeals, I prefer a colourful bike.  The C14 has a number of optional touring pieces, including a variety of windshields, which is good because the slab on that Concours ain’t comely.

Fortnine has the National Cycle Vstream windshield for the C14, which would give me a smaller but more functional, better made and swoopier look.  The bike comes with a top box and panniers, so there isn’t too much it’d need, other than sorting out the windshield and doing some touch up.  Seeing a blue bike, I immediately want to liven it up with some orange trim, Milano style.  Other than a full service and a few fixes, this bike is ready to do 100k.


The stock seat is already a comfortable thing, though I’ve enjoyed the Corbin on the Tiger so much I’d consider tapping them again for another custom saddle eventually.  The C14 Concours would be the biggest bike I’ve owned and could do something nothing in the garage can do right now, carry my son and I two-up while operating within the bike’s weight capacity.  It would also be just what I need to make a run to Moonbeam and back in 24 hours as the summer winds up.