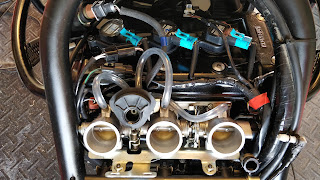 The other day I was once again going over the details on the Tiger after taking the tank of for the billionth time.  Even though the stock pipes for the vacuum controlled idle system for the electronic fuel injection hold vacuum when I test them, I can’t test that when they’re on the bike, so they might be leaking where they join.  I happened to have some fuel line in the right size, so I’ve taken out the Triumph hoses and put these clear ones on instead to isolate another possible point of failure.


Once I got them in I fired up the TUNEBOY software and figured I’d run the idle control system test since it would move the plunger up and down and with everything off I could check to see that it’s all working as it should,  except the ECU wouldn’t connect to the computer.  I’ve done dozens of TUNEBOY adjustments now and know how the bike syncs with the PC over the serial port, but it wasn’t connecting.  While trying some variations I turned the ignition on on the bike and the ECU made unfamiliar popping noise, and then none of the dash lights would come on (the running lights still do though).  The ECU no longer clicks off when the ignition is switched off either, which suggests it’s not coming on either.


The intermittent nature of this failure always made my ass twitch in terms of it being electronic rather than mechanical.  Mechanical failures tend to be more consistent and easier to diagnose, and I’ve replaced everything around the idle control system now, so unless Triumph sold me a dickey idle control motor, which seems unlikely since the first one lasted 17 years and did over seventy-six thousand hard, Canadian kilometres and survived seventeen -40°C Canadian winters.  Assuming all the new parts are working as they should, an ECU that was losing the plot is as likely a culprit as anything else I’ve been chasing, and now it seems to have popped entirely.


So what do you do when your old Triumph’s bike brain loses the plot?  Get another, I guess.  Used ones seems to be extraordinarily expensive and look to be in rough shape out of US used parts suppliers on eBay.  And for some reason they’re charging twice what European suppliers are for shipping.  With that and the fact that The States seem like they’re on the edge of a civil war, I think I’ll be looking to the dependable Germans who have COVID19 well managed for a replacement Tiger brain.  If I’m thinking that, I wonder how many other people are avoiding business with the US right now. 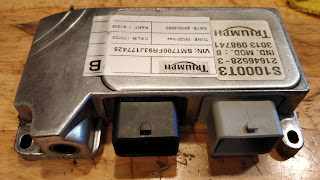 But before I go that far, I’m a G.D. computer engineering teacher, so I’m hardly going to let an ECU go in the bin without having a go at it first.  If this is a short or something simple, I can solve that easily enough.  If nothing else I can see how the ECU is set up architecturally, but more often than not I’m able to get electronics I have to open up working again.  Time to flex my soldering prowess.


The most frustrating part about this is that I may well have solved the idle problem with replacement hoses, or maybe I didn’t.  Maybe I chased down all of these hoses and parts for nothing and it was the ECU losing the plot all along.  Electronic Fuel Injection (EFI) is a wonderful thing, but the early systems were fragile.  There a lots of posts online about early Triumph EFI headaches, and I’ve added to them. 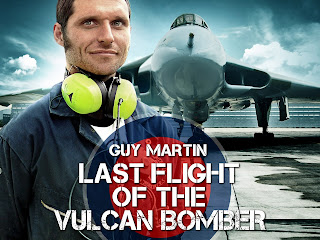 Guy Martin does a good special called The Last Flight of the Vulcan Bomber.  They grounded the last of these nuclear bombers in 2015 because they no longer had the expertise and technology too keep them safely air worthy.  In the show Guy talks about why there are plenty of older planes like Spitfires still flying when the Vulcan has to be grounded.  He says the Spitfire was made from bicycle parts you could fabricate in a shed, so they’re relatively easy to maintain.  The Vulcan was an industrial machine with early electrical and electronic systems that were many times more complicated.  He goes on to talk about how the Vulcan looked like it came from another planet when only seven years earlier an Avro Lancaster was the state of the art.  There are performance advantages in these leaps forward, but there are also maintenance headaches that mean these early jets will never fly again. 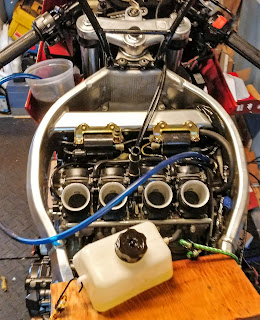 Early fuel injected bikes are a lot like that Vulcan – they can do things earlier bikes can’t like get better mileage, not need parts changed to ride at altitude and generally require less maintenance.  I just fixed up one of the last carbureted bikes, a 1997 Honda Fireblade, over the winter.  EFI was around then, but Honda wisely went for highly evolved carburettors rather than new, fragile and poor performing EFI systems.  I rebuilt the carbs, which are a complex but highly evolved four-carb set, and the bike runs like a Swiss (or rather Japanese) watch.  The EFI on the Tiger did the job without any attention for 17 years and seventy-six thousand kilometres including two rides into the Rockies – something no carburetor could do, but when it finally broke, boy did it break.  It’s things like this that will make these first generation EFI bikes rare in the future.  Like the Vulcan, they’re so complicated and difficult to maintain when they go wrong that they’ll get retired from service where an older, simpler bike might still be fixable.


RESOURCES FOR CHASING DOWN ECU PROBLEMS ON A TRIUMPH 955i MOTORBIKE:


Use Parts, not of the vintage I’m looking for though:
http://www.rubbersideup.com/triumph/tiger?p=2