I’m still wallowing in the sense of satisfaction from taking an old, field-found Concours and putting it back on the road again.  With a road-ready bike in the garage I’m looking for another project bike.  I’m not short on choices, a quick look online revealed a wide variety of ‘project’ bikes; apparently a lot of people start them and don’t finish them.  You can pick up failed projects that run the gamut from boxes of bits to a machine that just needs a bit of TLC.  I’d think you have to feel like a real burk if you bought a bike, dismantled it and then walked away from the mess you made, but people do it.  I’m left wondering if some people start projects just to waste time rather than aiming for a finished product.

Knowing which bike to pick is a big part of selecting a workable project.  The Concours was owned by an older fellow who knew what he was doing and fully intended to ride the bike again.  It wasn’t stored properly or used, but the attention paid to it was knowledgeable, making it a good choice for a project.  I was able to hear it running and even rode it home, so I knew what I was getting into.
The Connie is also a popular bike with a huge online community.  The ZG1000 Concours I have was in production from 1994 up until 2006 and ’86 to ’93 in a previous, similar generation.  A lengthy production run means lots of parts out there.  I had no trouble finding both new and used parts for it and getting advice was as easy as logging into the Concours Owners Group or referring to the easily found shop manual. 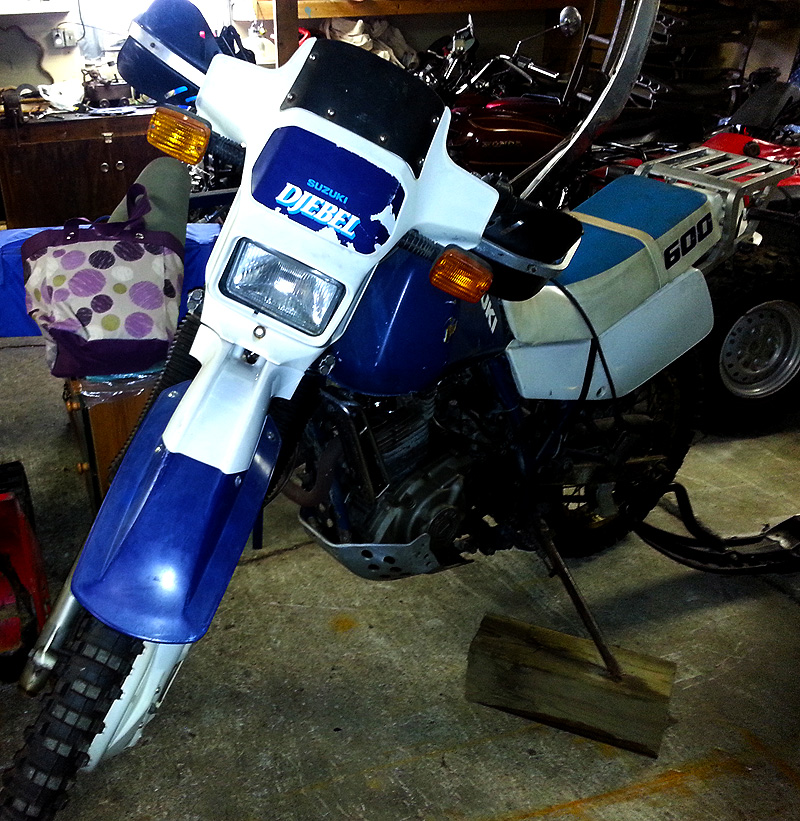 As a starting project the Concours was a good choice.  For my second project I’m looking for a bit more of a challenge.  Just north of me a 1989 Suzuki DR600 Djebel came up for sale, menacingly suggested as a project bike.
The DR600 evolved into the DR650 in 1990.  DR650s are still in production today, but the DR600 was quite a different machine.  After doing some digging on the interwebs I discovered that finding parts for it might be a real problem (one Suzuki dealer said there was no such bike).  There is no shop manual available from any of the usual publishers and the only thing I could find that was close was a photocopied PDF of a 1985 model from a guy in Australia.  The bike was available in continental Europe and Canada, but not the UK or the US, so I’m looking at a long out of production bike that was never sold in the largest market in the world.  This didn’t stop me from going up to look at it though. 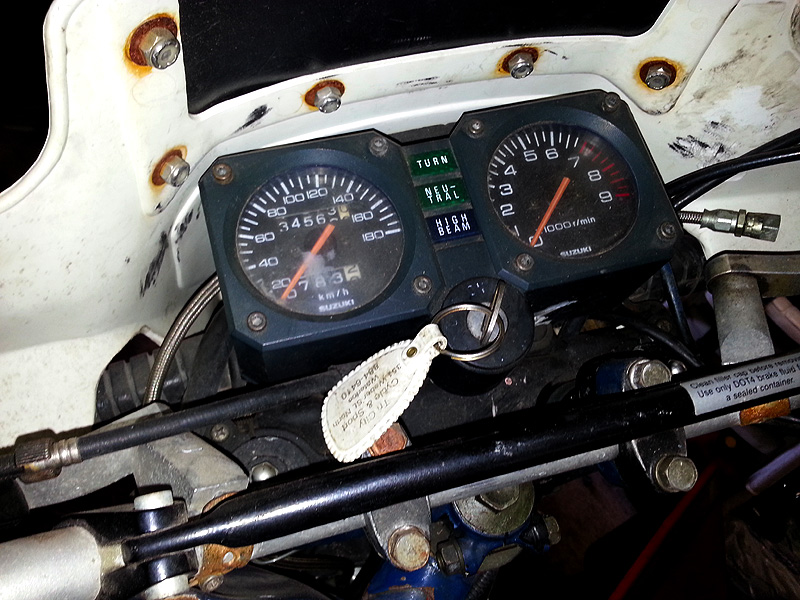 The DR600 is a huge trailee machine.  The young owner had the ownership, but it was still in the previous owner’s name in spite of the bike being in his possession for a couple of years; the project had obviously gone stale.  The amount of rust on fasteners suggested that the bike had been left in the weather for at least some of the time.  It won’t run, rust in the tank and fuel system was the diagnosis.  Aftermarket tanks are pretty easy to find for off road bikes (and look very Mondo Enduro), but there are none specifically for the DR600.  A DR650 tank might fit… might.
A non-running machine means you’re missing a chance to get a sense of the internal workings.  You’re probably walking into a complete engine rebuild if the bike has had rust force fed through it during two years of failed diagnostics.  An unplugged speedo cable and loose, corroded wires also raise questions around the accuracy of the mileage as well as the potential for annoying electrical issues.
I’m looking for a challenge, but the Djebel (an Arabic mountain!) is one I’m too cautious to climb.  If I’m a decade in and have wrenched a lot of bikes, I might have taken a swing at it, but not when the asking price is similar to a ten years newer, running KLR650.  I still had to fight my mechanical sympathy which was tugging at me to take the bike home and make it whole again.
So, I’m still looking for another project bike.  An ’81 Honda CB400 came up nearby for half the price of the Suzuki.  Also not running, but a much more popular machine that isn’t a problem for parts availability or service manuals.  Stored inside, it looks like a good candidate for my first rebuild.  It also looks like a good choice for a more complicated customization.  A CB400 Scrambler would be a sensible evolutionary step in bike builds for me.