The Toronto Bike Show at the Direct Energy Centre at the CNE was once again a nice day out.  What made it even better was that somehow managed to convince my highly educated, non-biking wife to join us, and she too had a great time.  I’m glad she picked this show as her first.  The TMS is a manufactures’ show case, so far fewer pirates and half naked girls and a much more professional presentation.

Here are some pictures from the show… 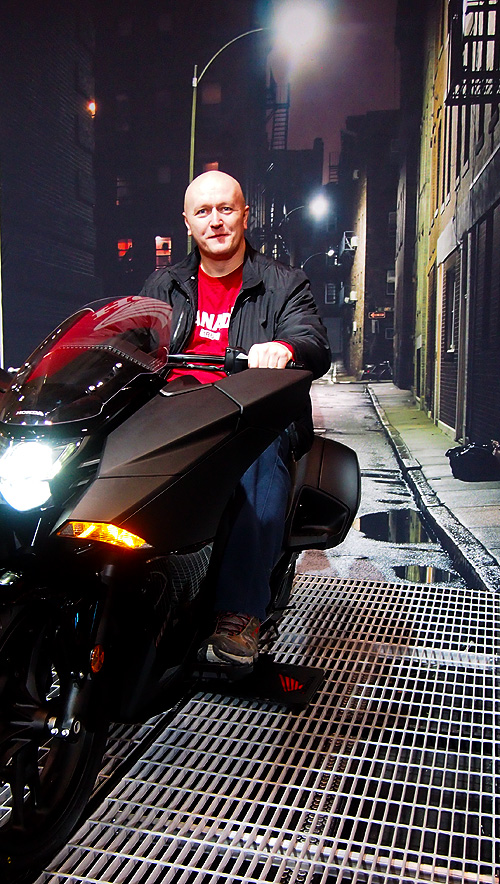 The Honda NM4: a bizarre styling exercise that I could get into because it’s supposedly based on the bike from Akira… the seating position was so weird and cruisery that I shrugged and walked away.  Would I like to see more anime themed bikes?  You bet, but not if they are ergonomically set up like American cruisers.

The more bikes I sit on, the more I prefer the good ‘ol standard riding position (every tall adventure bike I sat on was awesome) for long distance riding and the sport position for hard riding.  Anything else isn’t for riding, it’s for preening. 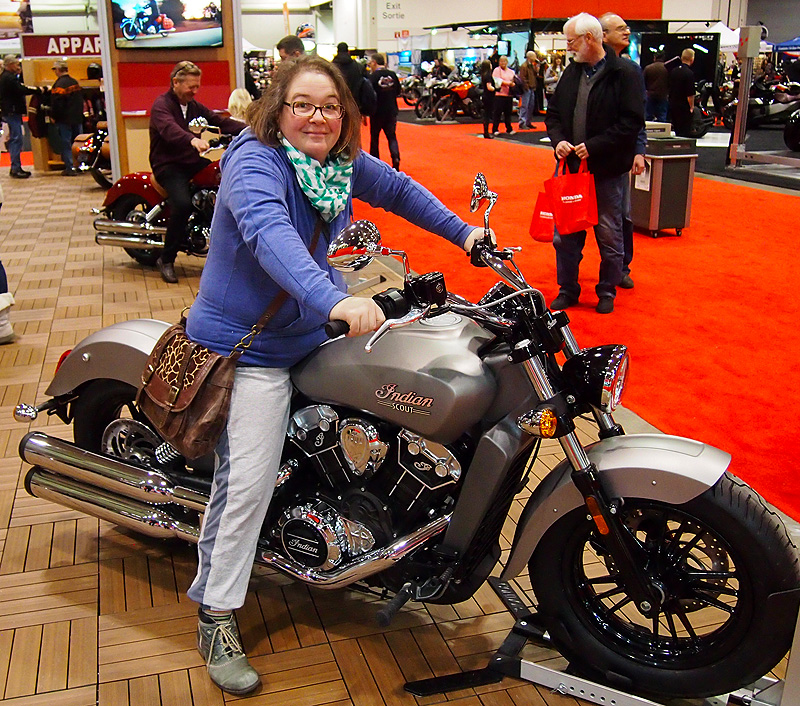 Way to go Toronto Motorcycle Show!  You got my wife out to a motorbike show!  Why would you want her there?  Well, she makes six figures, has two undergrad degrees and a Masters, has a huge social media presence and teaches other teachers how literacy and technology work.  That Indian Motorcycles produced the beautifully modern and yet classical Scout and it caught her attention says good things for the future of the TMS and the Scout! 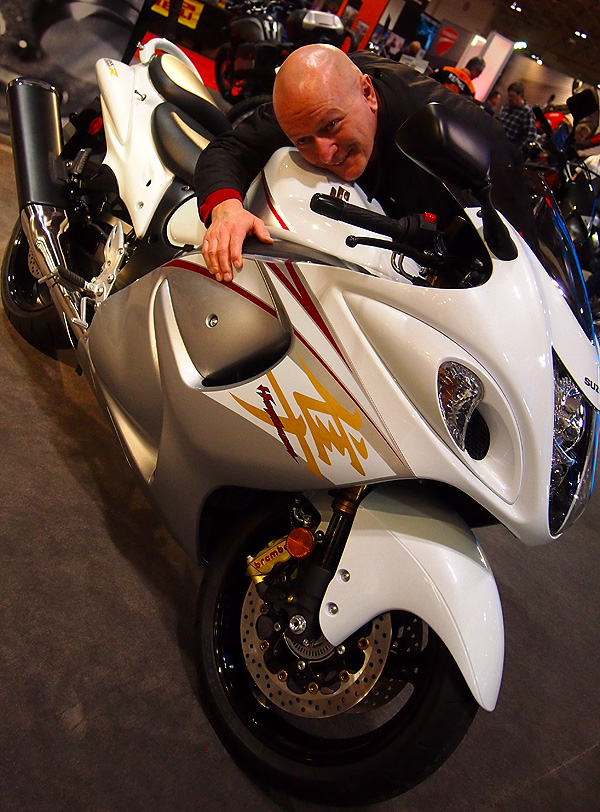 There are some bikes that just make you go all wobbly.  The Suzuki Hayabusa is one of those for me.  It also happens to be one of the few bikes out there that will get me to one of my bucket list items.  That something this powerful also happens to fit me better than smaller bikes while looking so fantastic makes me think I’d rather be on a Hayabusa rocketing into the future than on the Honda NM4 pretending to. 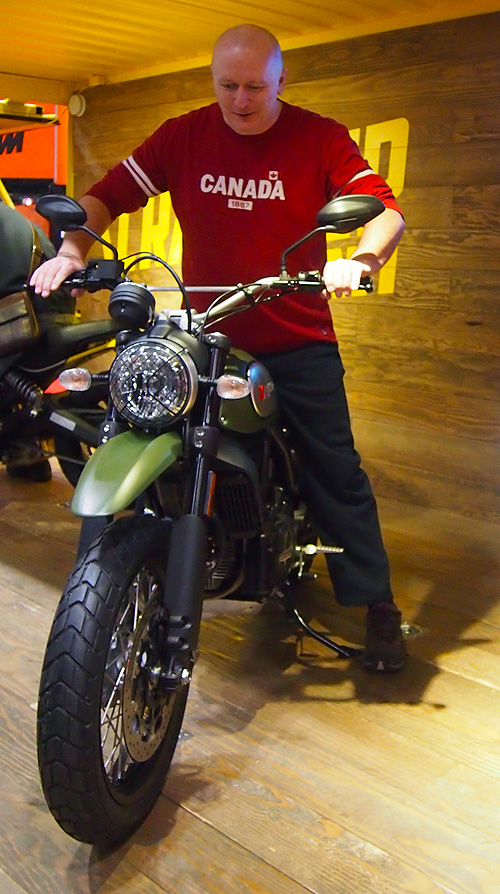 The Ducati Scrambler.  This bike is supposed to be designed for ‘hipsters‘.  I’m not sure why preening pretty boys should get dibs on this lovely machine.  The Scrambler is a light, Swiss-army knife of a bike that does what bikes used to do before marketing types decided what you should be doing with them and engineers started designing them only for niches.

The Scrambler feels like a throwback to a time before marketing dictated riding, and I, a forty something bald guy, want to be considered for the ride! 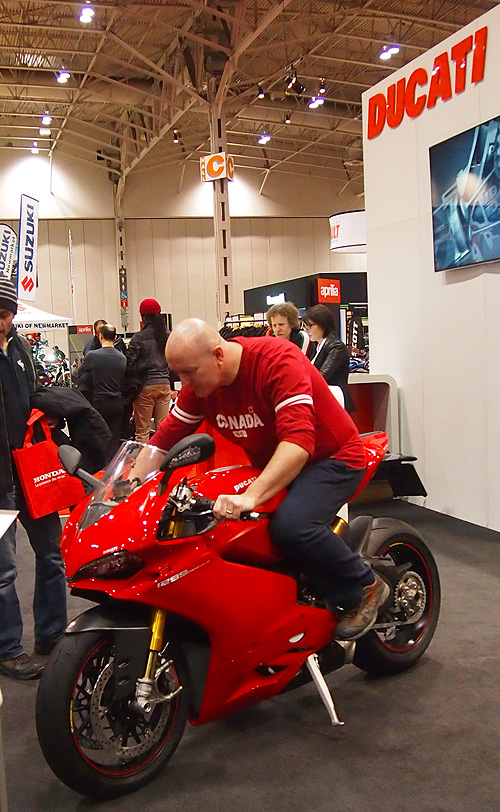 Wow, what a machine! 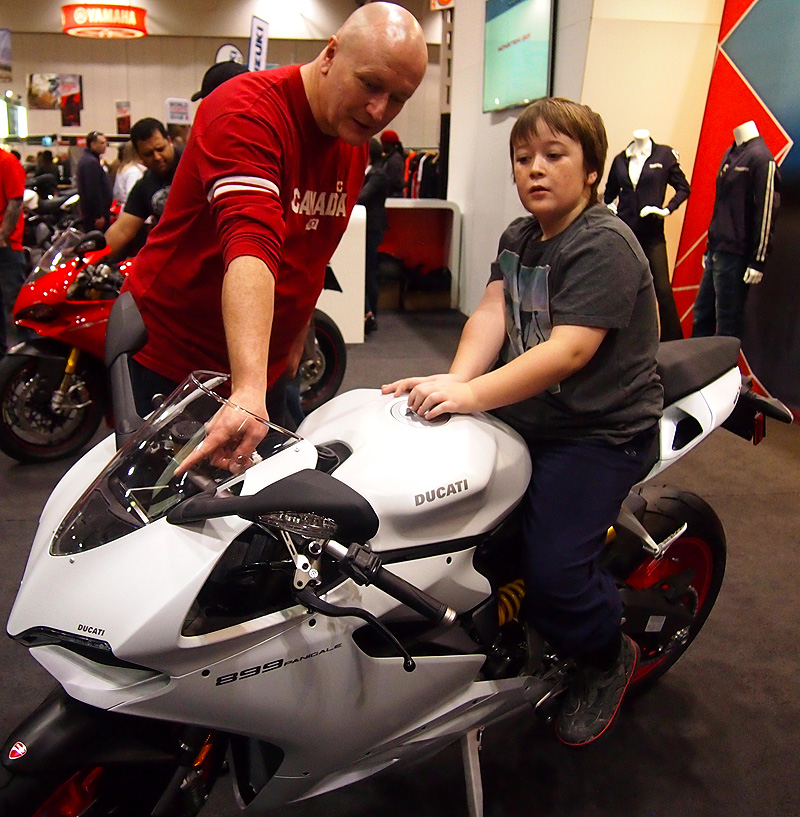 What goes where on the Panigale 899. 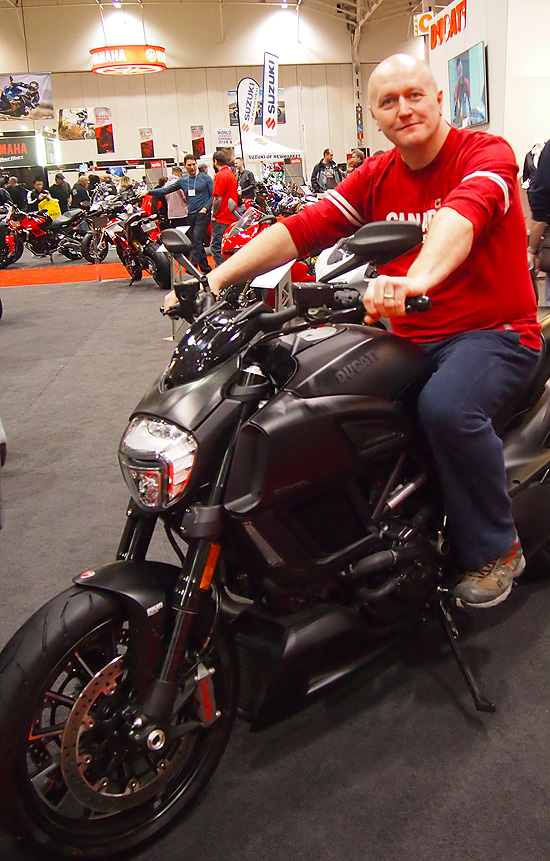 I was surprised at how impactful Ducati was on me this time around.  The Scrambler was magnetic, the Diavel was stunning and the Panigale was otherworldly!  These jewel like machines deserve more attention from me. 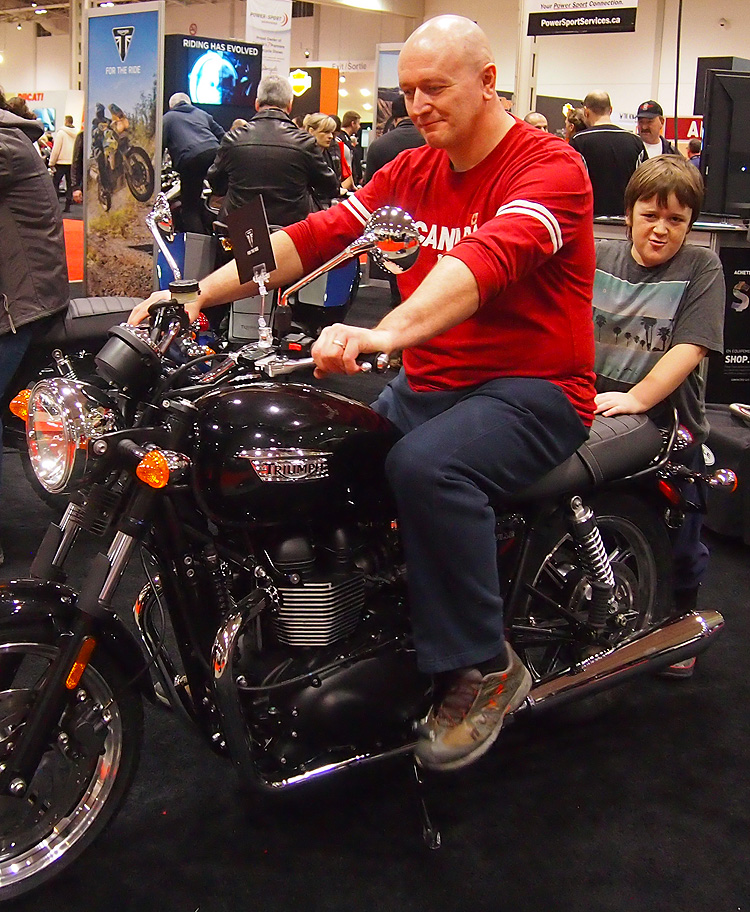 The Triumph Bonneville… and some photo-bomber guy. 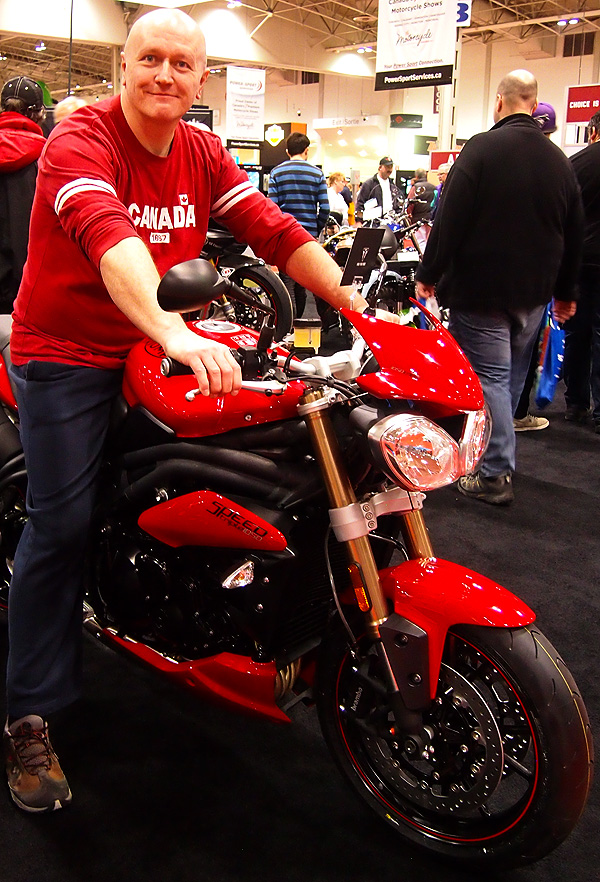 The Triumph Speed Triple.  What a beautiful machine!  With Triumph dealers so far away, I’m not feeling able to make the leap to a manufacturer that represents my homeland so well, but I hope to one day! 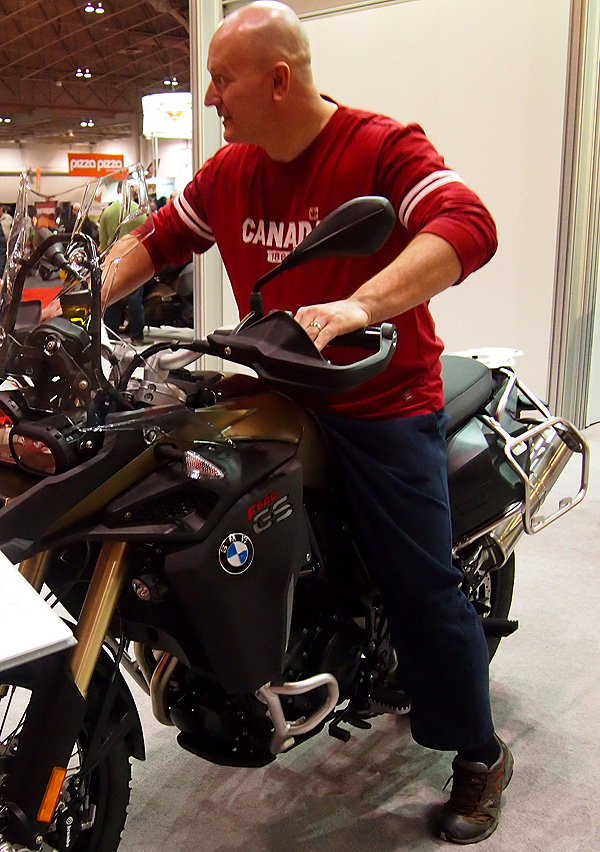 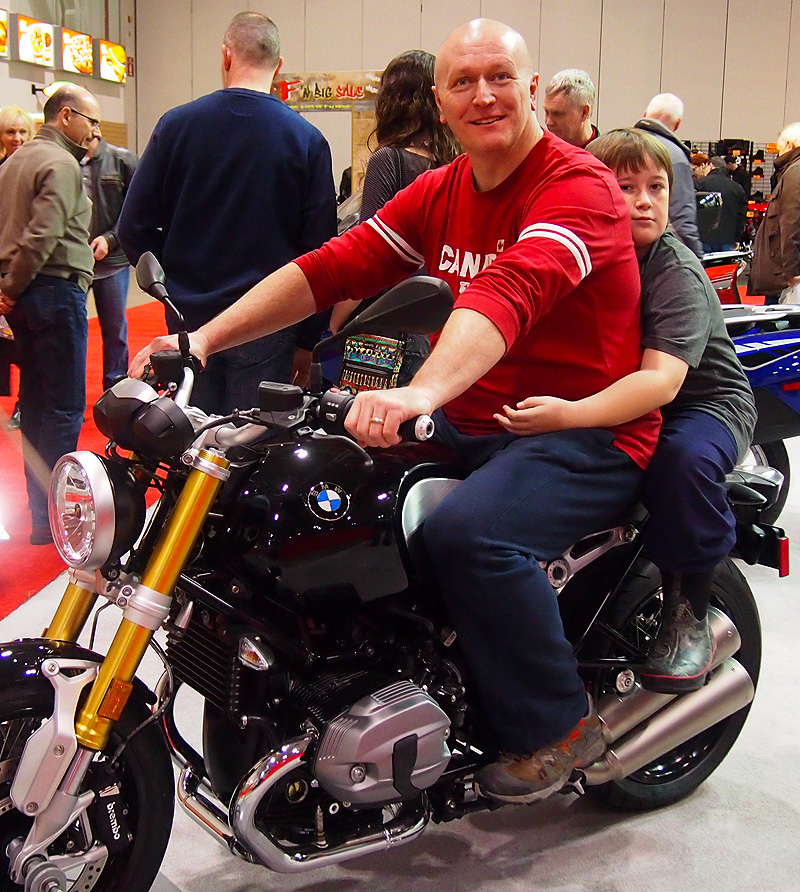 Like the other big adventure bikes, The BMW GS fits a tall guy nicely.  I’m hard pressed to find other bikes that feel as comfortable and capable as this kind of motorbike.  The Suzuki V-Strom was also a mighty comfortable fit, as was the Kawasaki Versys.

We’re two hours in and the little guy is about done… the last bike I sat on, the BMW R9T.  A beautifully put together bike that didn’t give me the same charge the Ducati Scrambler did.

I also bumped into Glenn Roberts from Motorcycle Mojo and James Nixon from Cycle Canada.  Glenn has a photographic memory of the hundreds of people he must talk to at these events, remembering the bike I rode from our last chat a year ago!  The talk with James got into how photography isn’t the only way to graphically support a story in a magazine.  It was nice to have a few minutes to chat with representatives from my two favourite Canadian motorcycle magazines.

Once again, the Toronto Motorcycle Show was worth the 3 hour round trip down to Toronto.  That it managed to be the focus of a great family day out and also managed to impress my new-to-bike-shows wife puts it in a special category of awesomeness.

We’ll be back next year!