With riding coming to an end in the Great White North I’m looking more closely at motorcycle media to sustain me through the long, dark cold.  Some magazines have already made the cut and are a sure thing when it comes to subscribing.

The first one I found was Cycle Canada: a local, opinionated and well written magazine that has no interest in editorial-beige.  They tend toward the no-holds barred British writing approach.  I subscribe to both BIKE and Performance Bike for that approach (though PB has enough grammar problems that I sometimes find it difficult to take seriously). 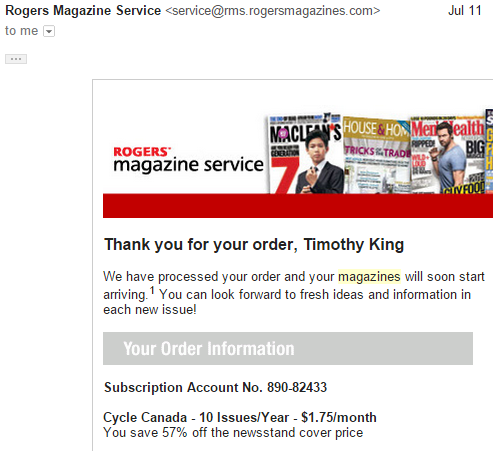 Cycle Canada is a joy to read, it’s just hard to get a hold of.  I tried to renew my subscription in the summer and the publishing company couldn’t get their website to work, which happens.  I tried again weeks later and it still wasn’t working.  Being told to phone it in doesn’t cut it in 2014 (I don’t like giving credit card info over the phone).  You have to wonder what’s going to happen to a media company that can’t make basic internet functionality work in the 21st Century.

I ended up going through Roger’s Magazine subscription service in July in an attempt to get my mits on CC, it’s the end of October and I haven’t seen a magazine yet.  Cycle Canada?  Great magazine, but pretty hard to get your hands on. The other Canadian magazine I’ve got a lock on is Motorcyle Mojo.  I think of it as the Canadian version of Rider Magazine (the only US magazine I’m subscribed to).  Excellent layouts and photography (which feel like an afterthought in CC), original travel pieces and knowledgeable editorials.  The writing isn’t as edgy as CC, but Motorcycle Mojo knows what it’s talking about and presents it well.  They also know how to run a website and communicate really well with their subscribers.

Two on the cusp are Inside Motorcycles and Canadian Biker Magazine.  I got both as a present, but I’m not sure if I’ll keep them going.  IM did an article this month on the Polaris Slingshot.  Apart from sounding like an advertisement, it also kept calling the three wheeler “unique”.  One of the first cars I ever rode in in England in the early 1970s was my grandmother’s three wheeler.  I suspect Morgan would dispute the gee-wiz uniqueness of the Slingshot as well.  You can’t be expected to know everything, but if you’re going to write on a vehicle, doing a little research would prevent you from calling the rehash of an idea that’s been around since the birth of motor vehicles, “a whole new class of vehicle.”  Lazy writing like that is what’ll stop me renewing that subscription.

At the same time Canadian Biker Magazine had an editorial by Robert Smith that not only demonstrated a deep and nuanced understanding of the history of three wheelers, but also accurately and incisively deconstructed why this type of vehicle can never let you experience flying in two dimensions like a motorcycle does.  This kind of knowledgeable and opinionated writing is what would keep me re-upping that subscription.