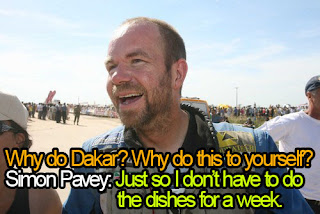 The opportunity to go ‘all out’ doesn’t happen very often.  I’ve thought about this from a Rick & Morty perspective in 2018 and it comes up whenever I’m watching documentaries on extreme sports.  Dakar long distance race legend Simon Pavey, when asked why he puts himself through this kind of danger and torture, said it was just so he didn’t have to do any dishes for a week.  There’s a truth underneath the Rick & Morty Susan Sarandon counselor character’s, “the thing about repairing, maintaining, and cleaning is it’s not an adventure. There’s no way to do it so wrong you might die. It’s just work. And the bottom line is, some people are okay going to work, and some people well, some people would rather die” and what Pavey said that I’m trying to dig out.

The very odd film, Up In The Air (2009), has a scene in it where Clooney, whose job it is to fire people, attempts to spin this debilitating experience as an opportunity, but I think they have it wrong.  The problem with Bob’s job isn’t that it didn’t follow his dreams, it’s that it doesn’t use him to his fullest, and in doing so engage him fully.  This only links to your dreams if you dream of challenge and growth – many people dream of ease and privilege; your dreams can be as big a trap as anything else.  In a job like that it’s always going to turn into nine to five plod because the job doesn’t ask enough of him.  Perhaps following his dreams and becoming a chef might have, but it’s the minimalist demands of his work and the salary trap that makes it an existential dead end.

In most cases everyone begins a new job hoping it will become this kind of challenge and provide a life long sense of achievement and direction, and in many cases that dead-end job highlighted in Up In The Air is the result.  Most jobs don’t want you to give your all, they want you to do what you’re told.  You’re a cog in an organization, not a human being that needs to be realized.

I was watching Moto2 motorcycle racing from last summer over the winter and came across a brilliant interview with John Hopkins, who is into coaching young riders these days.  In it John describes how he establishes trust through completely honest interactions and then, using that unpoliticised, transparent communication, creates clear step by step goals for younger riders to develop their confidence and tackle the seemingly impossible job of riding a modern race motorcycle at the limit.  There’s no mystery to peak performance, but so many organizations struggle to find it.  It never seems to happen through committee.

This weekend we watched The Defiant Ones and the story of Jimmy Iovine sheds light on the job that becomes an all consuming passion.  Jimmy’s a relatively uneducated fellow with an obvious ADHD spin to him, but he found a creative profession and threw himself into it completely.  Stevie Nicks ended up seeking him out because he was always in the studio; his commitment was absolute.

Many employers will say that they want to see this sort of commitment but it isn’t actually the case.  The nature of management in a hierarchical organization means that this kind of full commitment is a threat rather than a usable commodity.  They’re more interested in everyone supporting the corporate vision than they are in individual expression or differentiation.  Before you know it, even in a job where you think professionalism drives some kind of excellence, you’re mailing in your job and eagerly looking forward to doing anything else when you clock out.

This came up in the show New Amsterdam as well.  The maverick new medical director discovers that there are people in the hospital with forgotten, dead-end jobs that have them doing next to nothing all day.  His argument is that the x-ray technician who is collecting a paycheque for doing nothing would rather have a job that means something and helps the hospital save lives ends up being naive.  The old guy just wants to sit in his empty office with the dust covered x-ray machine collecting a paycheque until he retires; meaning has nothing to do with it – it’s all about the paycheque.  He has atrophied into laziest version of himself in order to keep collecting the paycheque.  It’s hard not to see this in education as people end their careers in an almost robotic trance, rolling out the same old lessons, doing no extracurriculars and inspiring no one while collecting the highest salary in the building.  If they’re really crafty they’ve found a way into an administrative job that doesn’t even have the demands of teaching.

In a typical year of teaching I have frustrations but I’m usually given enough latitude that we can aim at awesome.  These competitions give us a reason to step out of the ‘good enough’ of EQAO and provincial curriculum and apply ourselves more completely as human beings.  I’m often asked how we’re able to perform like we do against schools and systems with more money and resources.  The short answer is because we throw ourselves into it completely.  There is risk in this but what encourages students is that they know I’m as committed to them as they are to the contest.  In that trust lies great performance.

This year has thrown extracurriculars into the weeds.  We’ve managed to place two teams in the national finals of CyberTitan this year, but even that isn’t as easy as you’d think with students dropping out at the last minute and those left struggling to stay engaged in a schedule designed to run them into the ground.  Skills Ontario approaches and I’m still struggling to get students to commit to even minimal amounts of preparation.  This has been the year of shrug and walk away.
With competition erased or minimized and classwork crushed under unreasonable expectations, I’m finding teaching isn’t the outlet for excellence that I usually try and make it.  I’ve been thinking about what I’d like to do if I weren’t this deep into the teaching thing.  I’ve walked away from lucrative jobs before because they asked too little of me, but I never had a family to support when I was doing that.  In my final decade of teaching and with family support in mind, I’ll have to find other outlets to go ‘all out’ because the classroom isn’t the place for it any more in Ontario.  The last thing I want to do is mail in my job, it’s too important for that, but I don’t know what’s left to do.