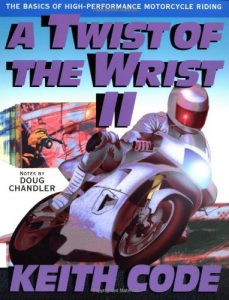 Reading Keith Code‘s Twist of the Wrist 2 on Kindle last night and came across this!  The part I’m in right now goes over how motorcycles tend to be self correcting (unlike cars).

When I bike starts to slide at the back it pushes the front wheel in the direction you want to go (unlike a car that pivots on the front wheels and requires you to counter steer into a slide).

The worst thing you can do on a bike is attempt to force a counter steer into the handlebars.  When you do this you’re creating huge torsional pressure between the front and back of the bike.  The bike resolves this by snapping back violently, launching the rider over the high side of the bike leaned into a corner.

Code keeps drilling in the point that the bike wants to self correct.  If you’re loose, relaxed and gentle with the controls the bike will bring itself back into alignment, even if the back wheel is sliding.

Even backing off the throttle suddenly on a rear wheel slide can cause a high side (you suddenly dump all the bike’s weight onto the front wheel causing it to snap back).  It might seem counter-intuitive, but in a slide maintaining throttle and letting the bike sort itself out will resolve most slides.  It’s a rider’s involuntary reaction due to fear and a lack of understanding of how motorcycle dynamics work that result in most corner related crashes.

I’ve been making a point of practicing throttle control in corners, using lower approach speeds but rolling the throttle on with a light hand as early as possible to balance the weight of the bike 60/40 over the back wheel.  I’m amazed at how settled in a corner the Ninja is now.

Motorcycle dynamics are a completely different beast from car dynamics.