It’s all snow and wind outside so I spent a good six hours in the garage this weekend rebuilding the front forks and the triple tree on the ’71 Bonneville winter project. 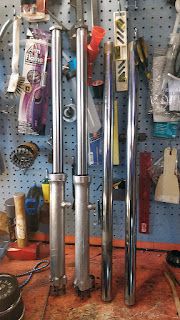 The forks on the bike had been ‘choppered’ with massive fork tubes and spacers in them.  The bike came with new stock fork tubes so after a cleanup both front forks got rebuilt with stock fork tubes.  I’ll put the chopper ones up for sale and see if it’ll make a dent in the new parts order I got in.

The internals on the forks were in good shape (it has always been stored inside).  After a cleanup they went back together again nicely.  The picture on the right gives you an idea of just how long those fork tubes were (almost as long as the whole shock!).
The right side front fork went right back in no problem, but  the left side one won’t fit in the lower triple tree mount (it has a bolt that squeezes it on but the circular clamp is too tight.  I’ve tried heating it up and wedging a screwdriver in the gap to respread it enough to accept a fork.  I shouldn’t complain, this is the only thing that’s being difficult on this fifty year old machine so far.
Meanwhile, the first parts order came in from British Cycle Parts.  They were great helping me clarify what I needed to get started.  The order was about $450 including shipping and got here quickly (within a week), one box from their Canadian warehouse and the other from their U.S. one.  I haven’t started installing anything yet, but I now have what I need to rebuild the Amal carbs, sort out the electrical system and take apart the motor to prep it to run for the first time.
The plan is to rebuild the carbs, get the motor sorted, install the upgraded ignition system (which I suspect will also involve creating a new electrical loom) and then see if I can get it all to run.  Once I’ve got it a step closer to running I’ll be back in touch with BritCycle to get the other bits and pieces I need to get it rideable.  The plan is still to get it to a place of getting a safety and putting it on the road next season.
I’m not a big fan of lost causes and I wrench to ride, so the point is to get the Bonneville back into service. After watching a lot of Henry Cole on TV, I like the idea of a ‘rat bike‘, which also means I can focus on the mechanics rather than how it looks.  If I can get the mechanics sorted to the point where I can ride it, I’ll do a season with it rough but rideable and then consider my options.  I got the bike and spares for $1500 and I’ve just put another $450 into it.  I think I can get it roadworthy for under $4000 and a non-running barn find bike of similar era was going for a grand more than that a few weeks ago online, so no matter what the Bonnie project won’t ever drip red.
In a perfect world I’ll get it sorted and some one will offer me more than I’ve put into it (cost, not time, I’m happy to put time in keeping bikes on the road).  Whether that’s once it’s roadworthy or once it’s been cleaned up too, I’m easy.  Meanwhile the Bonneville is doing what I wanted it to:  giving me an opportunity to go deep on a motorcycle restoration and learn a lot in the process. 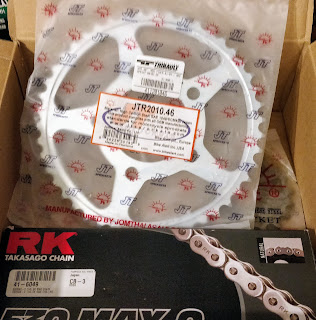 Somewhere in between all this deep surgery, the Concours needs new brake pads and the Tiger has some new sprockets and a chain to install.  To be honest, these minor maintenance jobs are something to look forward to after the deep diving into the restoration project.

Last winter was a deep maintenance round on the Tiger, but even that pales in comparison to the scale and scope of the Bonneville restoration.  Practical Sportsbikes and Classic Bike are both magazines focused on hands-on motorcycle mechanics and both have talked about the dreaded project stallout that can happen when it all gets too much.  I’m taking the advice of both mags and breaking this up into chunks and then solving things subsystem by subsystem.  The small wins help me feel like like the project is progressing and prevent the dreaded project-stallout from being overwhelmed by the whole thing.
On the upside, the fact that we got 15cm of snow over the weekend isn’t really on my mind as I’m keeping track of many things-to-do in the garage.