Skip to content
The Concours 14 is an excellent long distance weapon, but it’s built for someone much smaller than me.  When you’re tackling motorcycle ergonomics you can’t just slide a seat back, you’ve got to physically change parts, and the Concours parts aren’t fit for my intentions with it.  I sold a Honda Fireblade to get this bike and it wasn’t a like for like replacement.  If I’d wanted (or been able to use) a full on sports bike I’d have kept the ‘Blade, so I’m not trying to pretend the Kawasaki is anything like the Honda.  The side of the C14 I’m interested in is the long distance/two up riding bit.
With that in mind this otherwise stock, low mileage 2010 Kawasaki Concours felt like it was trying too hard to be a sports bike when it simply isn’t one.  The Honda only gave up 15 horsepower to the Kwak but was over 100kgs lighter!  After one 2+ hour ride the steering, while quite touring in appearance with long bars sweeping back from the headstock, are way too far forward and low for what I want to use the bike for.  At 6’3″ and 250lbs I’m also clearly not the average rider Kawasaki was aiming at with the rider ergonomics.  To solve the lean I put in Murph’s Kits bar risers which bring the grips 3/4 of an inch back and 1-3/8 inch up toward the rider.  This resulted in a 3% less lean and they installed very neatly, looking stock. 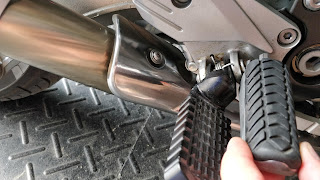 I could live with the pegs but my knees were feeling it on longer rides and my big feet meant I was sitting pigeon toed while trying to keep my feet off the rear brake and shifter.  What sold me on Murph’s Kits rider pegs was the promise of no more awkward, pigeon toed foot positioning thanks to the angle in them.  They were straightforward and quick to install (10 mins?) and reduced knee angle a couple of degrees while also allowing me to rest my big wamps on the pegs instead of having to hold my feet off them awkwardly.  A nice bonus is if I hook my boot heels on the new pegs they drop into the windflow under the bike and feel great in vented boots on a hot day; no regrets with that choice either. 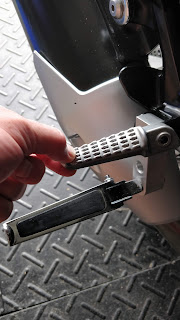 But none of this has helped my passenger feel comfortable on the bike, which was a major reason I pitched the Fireblade for a sports tourer.  WIth the panniers on the Connie leaves no room for passengers with big western feet.  The passenger pegs are also set very high, so high you’d have to be seriously into yoga to look comfortable on them.

Unfortunately, Murph ran out of gas after the rider pegs and doesn’t offer any passenger peg alternatives.  A bit of lurking on message boards uncovered VicRay Custom Performance who machine a set of passenger pegs for the Concours 14.  Vic sends these kits out himself and it took a few weeks longer than Murph’s deliveries (don’t sweat Canadian deliveries if you’re dealing with Murph, he’s got them down!).  Vic’s passenger pegs finally arrived this week and I installed them this afternoon.
The instructions were hand written but the installation was well explained and straightforward.  The quality of the machining is excellent and the extension of the pegs means we should have no more passenger ergonomic headaches while riding with panniers.  The rubber isolation and width of the alternate passenger peg also promises greater comfort.  We’ve been busy with work (contrary to popular belief, teachers work in the summer), but I’m optimistic about this choice too.  The new passenger pegs fold up neatly and suit the look of the bike.  If you didn’t know they weren’t stock you’d just assume they are. 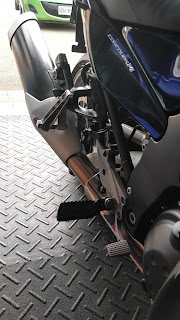 The last piece of the puzzle is the seat.  The C14 seat is narrow and gets to be quite miserable on longer rides with an awful lot of pressure on your, um, parts.  Alanna described it as, ‘hard on the vagina.”, so it’s uncomfortable for both rider and passenger.
The last time a poor OEM seat made me sad a Corbin saddle solved the puzzle.  I’d have gone for a used one but they retain their value and the used ones I could find were within a hundred bucks of getting my own custom designed seat.
Pre-pandemic my Tiger seat showed up in a surprisingly quick four weeks.  I’m five weeks into having ordered this time but I fear COVIDtime will strike again and the saddle won’t show up for some weeks yet.
The pegs relax the legs and the bar risers ease the crouch.  Big Blue is more comfortable than it has ever been and is starting to show the promise of the touring/sports/muscle bike I was aiming for.  Once that Corbin lands it’ll be ready to ironbutt on. 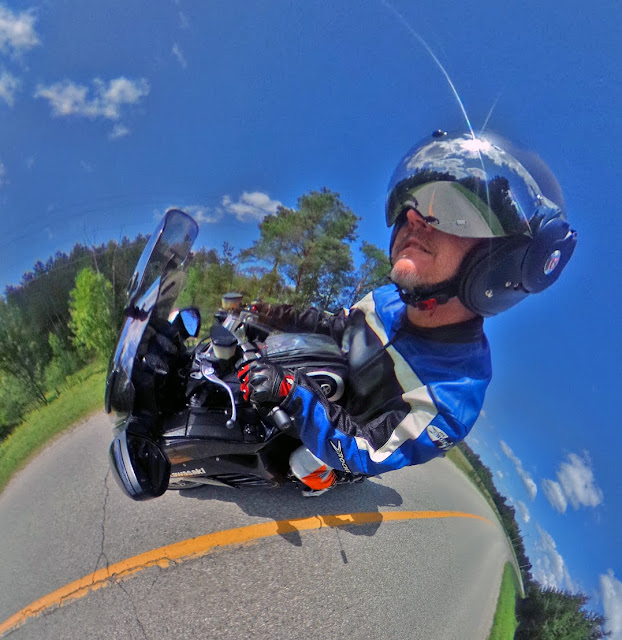