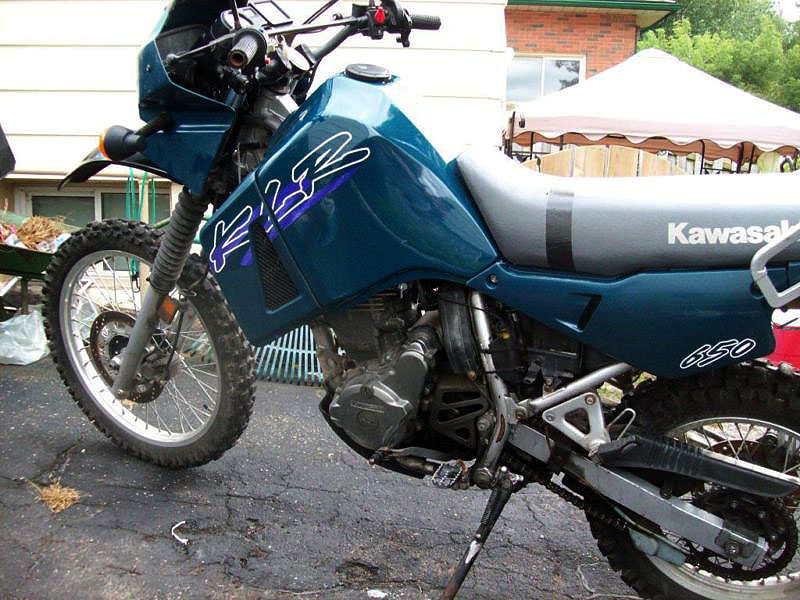 A super high mileage KLR, but it’s pretty new (mid-00s).  Unclear on its mechanical details, other than it’s very tired and the plastics and tank don’t match.

$1300 seems like a lot to pay for a bike in such condition with unoriginal parts (probably because it’s been dropped hard).

If I got it I’d shelf it for a year while I broke it to pieces and rebuilt it.  I might go as high as $800, but I’ll be spending a lot to give this tired old bike a second life.  I’ve asked the owner for info…

Followup:  I got a fantastic response from the owner.  The bike has been fettled to within an inch of its life.  The first owner took it from Alaska to Tierra del Fuego, and did the Demptster Highway.  The second and current owner has taken it to James Bay and various off-road adventures in the past couple of years.  It hasn’t been dropped recently, but it’s an off-road capable bike, so it’s been down, once in Chile where they rider had to order in a new instrument cluster, the mileage is uncertain with the replacement instruments.  This bike has had a life, and now it’s for sale in Southern Ontario.

I suggested he sell it back to Kawasaki, this KLR shows what KLRs are capable of.