At Kawasaki’s Demo-Day last weekend I threw a leg over as many different bikes as I could.  I’m looking for my second bike and I have an opportunity to make a much more educated decision this time, however my expectations didn’t always match my riding experience, although with my current crush they exceeded them:

I started on a bike I like so much I’ve got a poster of it up in the garage: the Kawasaki Z1000.  Riding a 1000cc bike spoiled me for the rest of the day.  You can be inattentive with gear changes and the big four just pulls away with turbine like insistence.  The wide bars made handling light and responsive and I didn’t find the gearing as twitchy as I’ve read it is.

It’s not often that someone you’re smitten with is as impressive in person, but the Z1000 rides as special as it looks.  It pulls hard, feels wonderfully poised and seems to enjoy moving as much as the rider, it has the same kind of cheerful internal combustion that my Ninja has.

Our 20-30 minute round trip down country roads and through villages put this naked beauty in its glory.  It’s a bike for riding not a bike for covering miles at speed, but if you’re looking for an interactive riding experience this is it.  As a solo riding machine that puts the focus on the experience, you can’t get much better.  It’s an emotional as well as a mechanically satisfying ride.  When I’ve been riding long enough that I can afford to insure one, it’ll be on my short list.

I’ve been curious about the Versus for a while now, it’s Kawasaki’s all-rounder.  Before taking any out I was talking to the Kawi-rep and he said they get photos of people riding Versys to the ends of the earth, it’s a very capable all-round machine.

I’d initially only signed up for a 650cc test ride, but the rep was able to get me onto a VIP ride with the 1000cc, and I’m glad he did.  The big Versys is a tall bike with great wind protection, tall handlebars and comfortable seating position.  Like the Z1000, that big four is turbine smooth and pulls hard at any RPM.  It’s an easy bike to ride and doesn’t show its weight other than the somewhat awkward ride height.

My 32″ inseam just touched the ground but I couldn’t flatfoot.  On a bike this tall I’d expect more relaxed geometry in my legs when I’m on the pegs, but they were bent about as much as they are on my Ninja.  Short of getting on a cruiser I’m going to have to assume I’ll be folding myself onto most bikes.  If the foot pegs are high enough to allow the bike to lean into corners meaningfully then leg geometry is going to be bent.


Overall I found the big Versys a nice surprise.  It’s only 33 kilos heavier than the 650cc bike and has much more presence, comfort and wind protection.  This would be a bike that could cover long miles with ease, yet is higher off the ground and able to traverse even rough terrain.

I was talking to a rep from Rally Connex Adventure Tours about the Versys and he suggested it wouldn’t take much to create a Versys Scrambler.  His main concern was the soft underbelly full of exhaust pipes – with a modified exhaust that runs up the side high on the bike, the Versys might become a real RTW contender.

The little Versys was the one I was keen to try.  It has the same engine as my Ninja, which I think sounds great, is super efficient and offers great power to weight.  I expected a light, quick bike with a more neutral riding position suitable for longer rides.

I was surprised at how rough the little Versys was.  Perhaps I was spoiled by riding the bigger bike first, but on the ride home back on my own Ninja it had none of the buzziness of the 650cc Versys.  The seat was hard and high and the riding position is less leaned over than on the Ninja, but not by much.  When revved it I found a lot of vibration coming back through the handlebars and seat, to the point where I didn’t want to rev it and actually stalled it at a traffic light (my only stall of the day).  Perhaps it’s a new engine and it hasn’t been worked in yet, but the bike I was most curious about was the one I had the least interest in after the ride.  It was uncomfortable, felt under-powered and didn’t offer the more relaxed rider geometry that I was hoping for, a real disappointment. 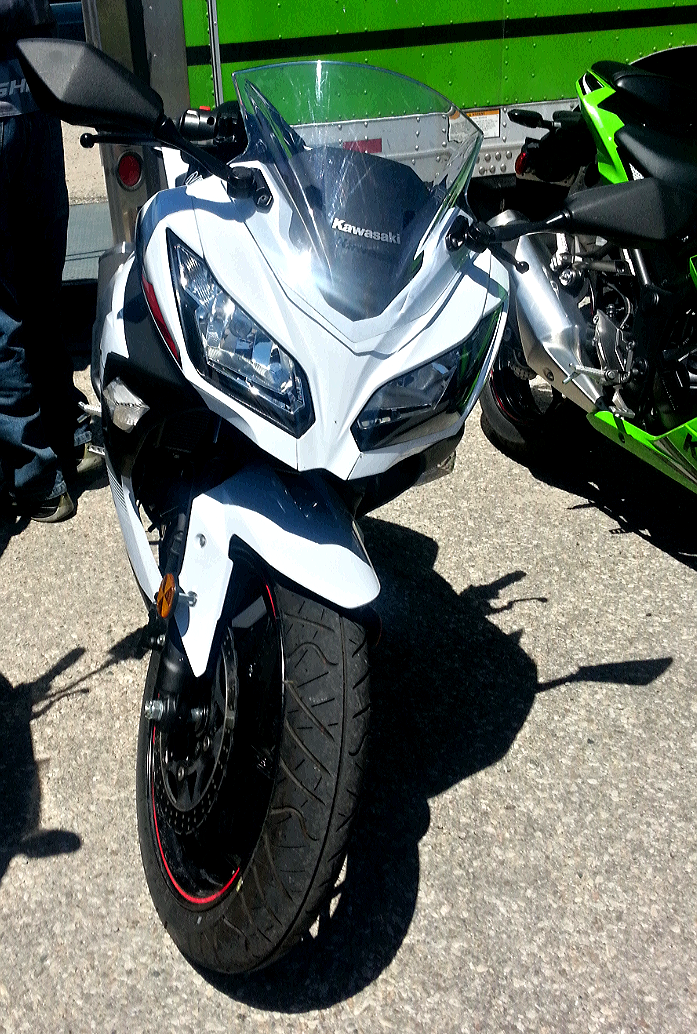 I would have signed up for a ride on the Ninja 1000 or the ZX-14r, the former because it has gotten good reviews as an athletic all-rounder, the later because it’s bonkers and I’ve got a crush on it, but instead I thought I’d try the Ninja 300 to see what such a wee bike is capable of.  It turns out, quite a lot!  Trying to keep up with everyone else on two to three (to five!) times the displacement was tricky until I figured the bike out. 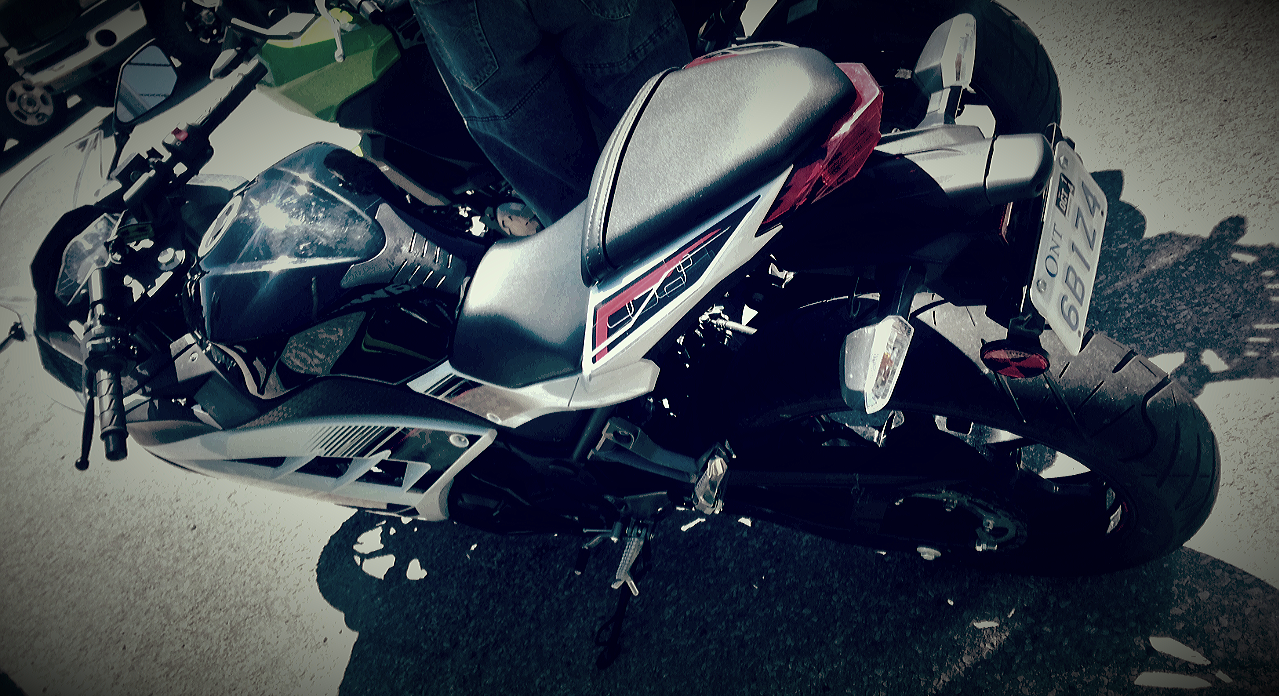 The little Ninja is unbelievably light and feels weak until you get half way up the rev range, then that little motor comes to life.  Five minutes in I wasn’t letting it drop below seven thousand RPM, and I hit the rev limiter at a stratospheric 13,000 RPM a couple of times before I figured out how to keep it close by the sound of the engine (which is surprisingly smooth and eager).

The wee Ninja is a limited machine, no doubt, but when you wring its neck its also a very entertaining one.  It was nice to end my day of rides with such a pleasant surprise. 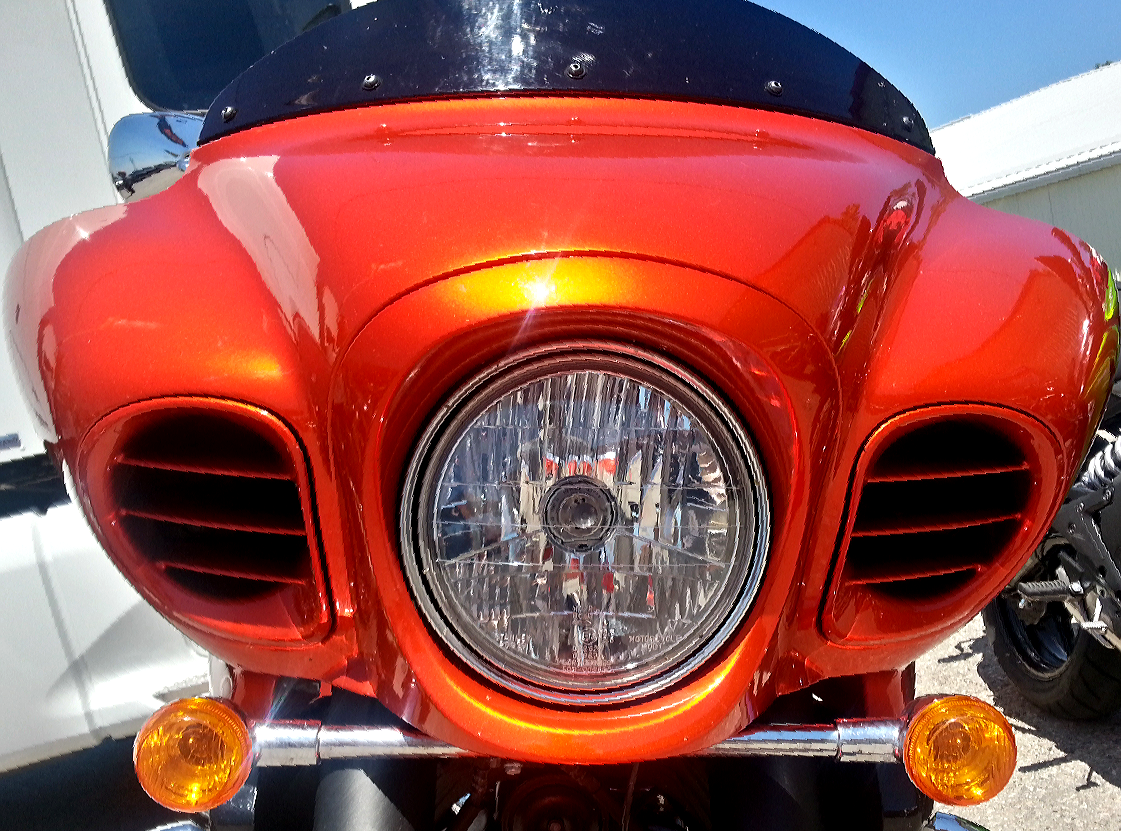 There was such a mix of bikes at this demo ride that I’m disappointed that I couldn’t try them all.  From the ZX-14r super-bike to something as relaxed as the Vulcan cruiser, I’m more curious than ever as to how all these bikes do the same job differently.  Even up the sports/adventure end of things where I did my riding, the differences in the bikes were astonishing.


As I mentioned before, if you have a chance to do a demo-day, I highly recommend it.  The experiences gained there make finding a bike that suits you a matter of fact and hands-on preference rather than faith and opinion.