When you’re using digital tools to assist your writing process, you’re not only getting grammar and spelling support, but you’re also performing your writing process in a fishbowl.  It’s amazing how many digital natives seem to be unaware of this.  When you create online you’re creating in a radically transparent environment.  If you’re going to do something less than honest, it’ll show.

I had a series of plagiarism issues teaching elearning this semester.  In one case a student handed in the same thing copied off the internet in two different assignments.  Worst. Plagiarizer.  Ever.


The Ontario elearning system has Turnitin.com built into it, so catching the plagiarism was a matter of opening the report, screen capturing it and sending it on to the student.  When it’s that easy, it’s not even particularly time consuming to call a student on copied text.  I often have students try to beat turnitin in order to show them how it works.  They leave with an appreciation of how easy it is for the teacher to wield and how hard it is for a student to beat.  It’s easier to just write it yourself.

When I catch a plagiarizer I usually just show them the report without explanation and then see what they say.  I’ve gotten some funny responses to this, like the time the rural Ontario farm kid stole an essay from an honours student from India.  When I asked him what a ‘chap’ was, he said it, “was a kind of stick.”  That’s some quality plagiarism.  To most English teachers it’s patently obvious when plagiarism occurs.  When a kid who appears to have a vocabulary mainly consisting of swear words suddenly starts dropping four syllable terms in picture perfect compound sentences, alarms go off.

Since we’ve gone to Google-docs it gets even more transparent.  A colleague told me about a student who handed in a suddenly perfect French paper.  She opened up the editing history and saw that the boyfriend had logged in (under his own account) and edited the entire thing.  When called on it the student said she’d had to use his account because she couldn’t get into her’s… but she’d shared the file from hers.  It’s hard to make lies stick when it’s all out there.

Until students realize just how transparent working online is, they are labouring under a huge misconception.  That misunderstanding is based on the false sense of anonymity they feel when they are online.  Because they feel that eyes are off them, they are more likely to push moral boundaries, but they don’t understand that digital processes are documenting their every move.

Here is yet another example of how ‘digital natives‘ fail to grasp the basic concepts that drive digital processes.  We shouldn’t be smitten with familiarity, we should be advocating for understanding… at least if we’re still trying to educate people (which may not be the case).  From that neo-lib point of view, the digital native is one of those magical assumptions that integrate digital technology into the very biology of our students, it becomes a fundamental truth we base learning on, but it’s just a convenient assumption that frees us from taking on the responsibility of understanding it ourselves.

Someone shared The Brave New World of 21st Century Teaching the other day in our teacher Facebook group.  I responded:

The subtext of 21st Century skills is the de-branding of educators as teachers and the re-branding of educators as facilitators. Edtech could be used to enhance pedagogy and individualize learning, instead it will be used to Walmart education into a process overseen by centralized administration and bereft of teachers, and it has the convenience of being much more ‘efficient’ (read: cheaper) than our current system.  It’s also more controlable than trying to manage a bunch of professionals bent on something as airy fairy as pedagogy.

Technology doesn’t appear to be moving the needle on student success, yet we’re pushing into 21st century skills as though they will resolve all ills.  I’m a strong advocate of mastering technology, but integrating it in ignorance is a disaster in the making.  It caters to exactly the kind of blind faith in technocratic neo liberalism that is infecting everything else.  When we adopt machines in ignorance we let their limitations become our limitations.  Those machines are all created and owned by very politically motivated interests. 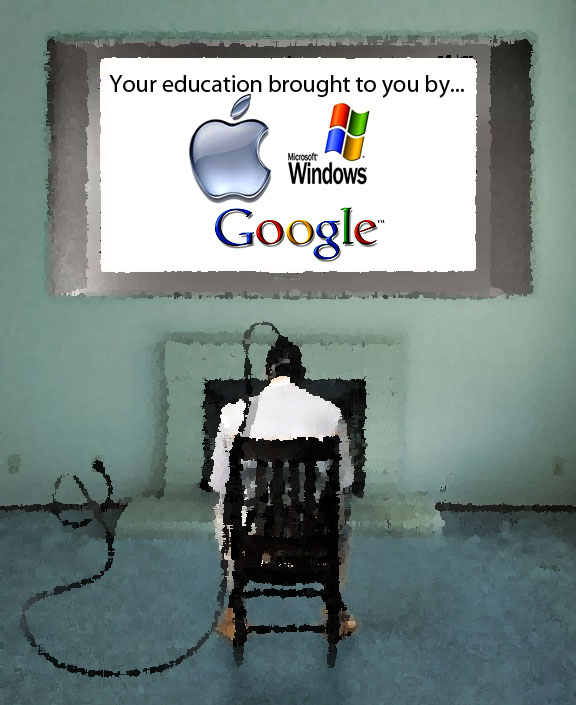 For someone who has always been involved in the advancement of educational technology, it’s heart-breaking to see it implemented as a means of diminishing the teaching profession and placing human learning in the context of a software environment.  I’d always thought pedagogy would drive educational adoption of technology, but as in the rest of society, there is something much more sinister at work in digitization.

The constant downward pressure on freedom of information and the push to striate and own data (including the data users willingly give) points toward a dystopian and authoritarian end to our digital frontier.  The very processes that monitor plagiarism above can as easily be used to invade privacy, grossly simplify learning and itemize people for political reasons, and they are.

I’m glad it’s summer.  Time to put this down for a while before we walk straight into another round of manufactured austerity and digital marketing.  I wonder how much longer education can withstand these social forces.