Skip to content
What does the double hair pin at Forks of the Credit look like on a sunny Sunday in May?
… and I missed the first ten that went by right to left!

It’s a sunny Sunday afternoon on May 25th and I’ve got an afternoon on the Ninja.  Rather than do a pointless local loop I aim at The Forks and head east.  It’s a nice ride on relatively interesting roads across Wellington County, Hillsburgh and Erin to Belfountain.  When I get there I realize that I’ve just walked into a mecca of bike culture in Southern Ontario. 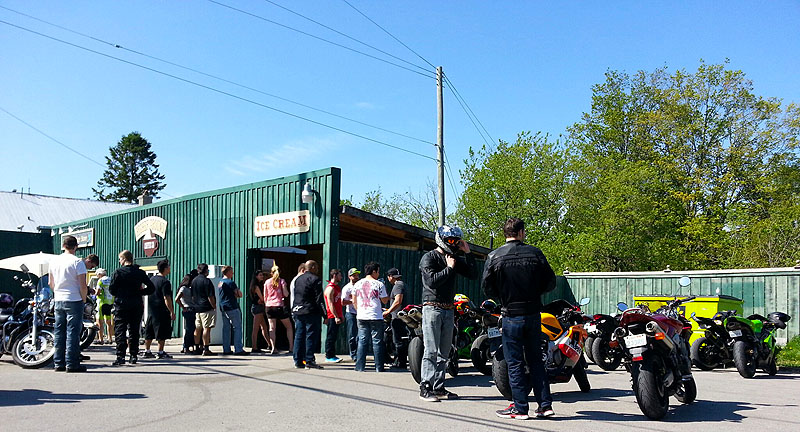 The parking lot of the local ice cream and coffee shop is covered in motorcycles of all description, from Harleys to Ducatis and everything in between.  I hang a left and head onto seven of the best kilometres in Ontario.  On the ride down I’ve timed it perfectly, no one is in front of me and I lean the bike more than I ever have before.  Suddenly timely gear changes are vital to balancing the bike and the tires get some wear on the sides.

I’ve been coming up to The Forks since I got my driver’s license in the 1980s, but this is the first time I’ve done it on two wheels (except for once in an Escort GT, but that wasn’t intentional).  On my way back I get stuck behind a guy in a Prius (a Prius?  Really?) and decide to pull over at the hairpin to get some media.  An OPP cruiser slows as he sees me on the side of the road but I give him a wave and when he realizes I’m taking pictures and not hurt he gives me a wave back and continues on his way.

That train of bikes in the opening video was actually ten bikes longer, I’d already put the phone away when they started and didn’t get it out and recording until halfway through the two wheeled parade.

Watching the cars lumber around the hairpin is a stark contrast to the bikes as they weave through the 180° hairpin.  At one point I thought one of the cars was going to have to back up to make it.

Back in Belfountain (where I got married sixteen years ago), I have a cup’o’tea and wander around looking at the bikes.  There is a constant stream of people coming and going, all ages, genders and interests.  The leather clad Harley guys are there, adventure types in their Aerostich, the sport bike crowd in their leathers, the touring riders on their Goldwings with pillions in tow, and even some cafe racers in their vintage gear.  It’s a cross section of Ontario motorbiking culture.

After my wander I do The Forks once more, this time I’m clear both ways.  I pass back through Belfountain and a whole new flock of bikes have flown in.  My blood is pumping now and I get home fifteen minutes faster than I got here.