Skip to content
The old Triumph motor has refused to turn ever since I picked it up in the fall.  Every attempt at cycling the engine has failed so last weekend I dug into the top end, which turned out to be much more difficult than it needed to be.
Many moons ago I was putting myself through university by working as the service manager at an automotive shop.  One of our technicians, Jeff, always cheerfully described a situation where you’re up against parts that don’t want to move as a ‘bend the fuck out of it’ situation.  I’m no fan of pointless violence when it comes to mechanics, but there does come a point where you’ve either got to ‘give ‘er’ (another of his favourite sayings) or give up.
Your mood when performing mechanical taks seeps into the machine.  If you’re angry when you do repairs, that anger ends up in the mechanical work you’re doing, which usually doesn’t end well.  A Zen approach to mechanics usually creates a zen machine that doesn’t emit the drama that an angry machine will.  Having said all of that, I’d pretty much emptied my swearing vocab by the time I had untangled this Triumph twin on Sunday. 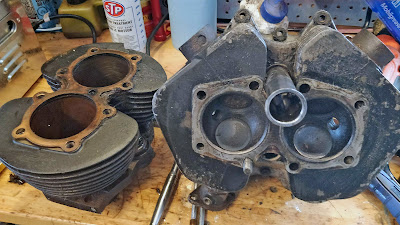 Having never worked on this kind of motor before, I was lucky enough to get a spare head and cylinder sleeve when I got the bike, so rather than go in blind I disassembled the spare unit first to see how it all went together.

I continue to enjoy working on this pre-digital, very mechanical motorbike.  While it isn’t as efficient and exact as a modern bike, there is something very satisfying about getting the mechanical bits lined up so that they work together.  When it’s finally running it’ll feel like I’ve rebuilt a Swiss watch.
With the practice head disassembled, I began removing the head on the bike.  It came apart as my reconnaissance suggested it would and looked mechanically sound with no discolouration or obvious wear.  The bad news came as I finally got down to the head gasket. 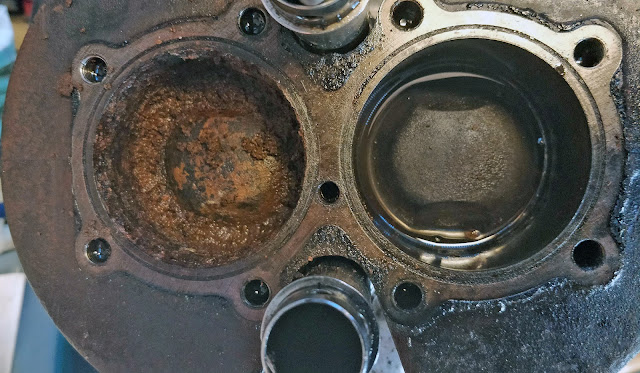 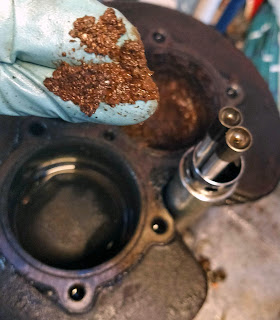 The right hand cylinder looked fantastic, but the left side was a mess with a thick layer of corrosion and an obviously seized-in-the-sleeve cylinder.  I’d expect to see something like this on a water cooled engine when the head gasket has failed allowing water and coolant into the cylinder, but this is an air cooled unit with no coolant in sight.  My best guess is someone left the spark plug out in a damp environment for an extended period of time letting moisture in to disastrous effect.  It’s amazing what a bit of laziness or stupidity can be amplified into over time.

With a cylinder seized in the sleeve, I was left in a bind (see what I did there?).  I left it soaking in brake fluid overnight (I’d tried WD40 previously), but the next day it was just as stuck.  I applied heat, and then tried to lever the head off the cylinder to no effect, which led to that Jeff moment where I had to decide how far I’m willing to go to win (the answer is: all the way, in case you were wondering). 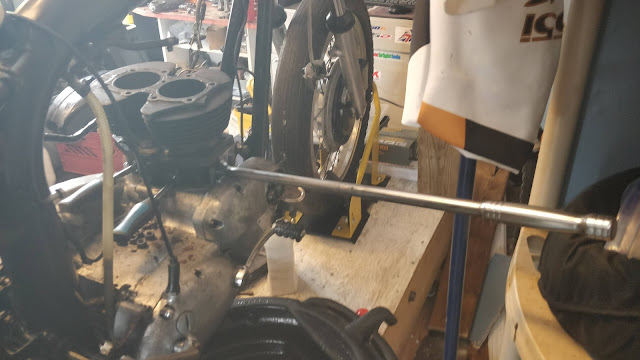 What followed was longer and longer breaker bars to apply more leverage, mixed with some applied heat from the propane torch.  What finally ended up working after a couple of hours of swearing and sweat was applying heat, inserting a long piece of wood to lever the head up while applying some focused violence to the cylinder top.  Millimetre by millimetre the cylinder sleeve eased up until the head finally came free, which was good because I was all out of swear words by that point. 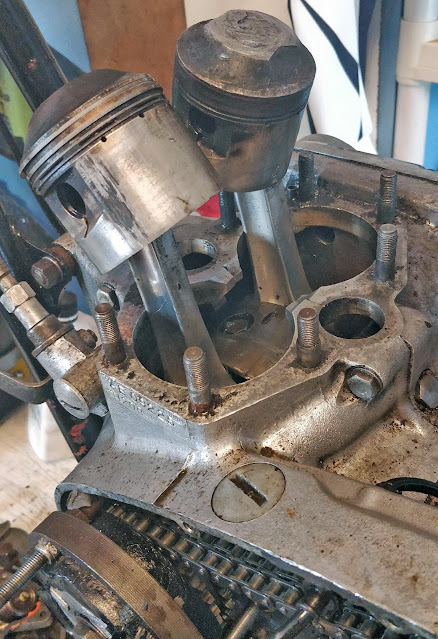 I was rewarded with a couple of nice observations once the damned thing came off.  Firstly, the bottom end moved very smoothly for a motor that hasn’t spun in 30 years.  There is no play or noise in the big end as it turns.  Secondly, the kickstarter I rebuilt the other week works perfectly, engaging and spinning the motor when applied and not interfering when left, which was satisfying. 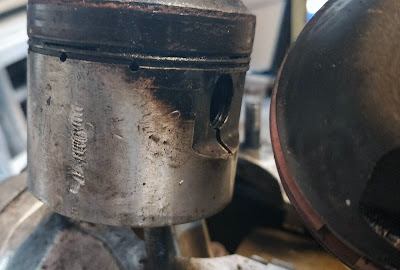 Looking at the jammed cylinder, it looks heat seized with burn marks all over the inside and physical damage up the side.  If replacements aren’t crazy, I might use the spare head I’ve got to get things into motion, but if it’s going to cost a lot to the replace these bits I think I’m looking at a more aggressive customization option:  a 750cc big-bore kit.

Dropping $1000 into a broken motor seems extreme (it is extreme), but I’ve had to recalibrate my what-I’m-willing-to-pay index throughout this project; vintage ain’t cheap.  If it’s going to cost the better part of $500 to get the motor back to stock, why not get all new parts and get an engine upgrade in the process?
I’ve done a number of projects now where I get a sidelined bike back on the road, the most recent of which was a ’97 Honda Fireblade, but I’ve never had to do a complete engine rebuild.  Unlike some of my more fraught earlier mechanical work on the only bike I owned that was keeping me from the far-too-short Canadian riding season, I can take my time with the Bonnie and go all the way if it needs it and I’m up for it.  The only thing producing drag is my inherent cheapness.
I’m still intent on making sure the project pays for itself.  It doesn’t have to pay me for my time, this is a hobby, but when I sell a restored machine and it balances the books in terms of purchase price and parts, I find that inherently satisfying; it means my hobby is a zero-sum game.  The Bonnie currently owes me $1500 for the bike and spares and another $500 in parts so far.  Rebuilt in running shape (but customized and I’d say pretty fugly) similar Bonnies are asking $7500.  If I can mechanically restore this bike to good running order and clean it up, a $5000 budget should see me well into the black.
Now to decide how to drop the next three grand on this thing…

Some other photos from the work this past weekend: