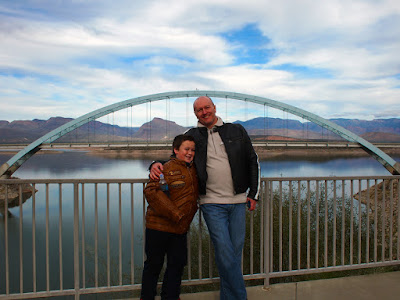 Back in 2016 we did a winter family holiday to Las Vegas and then drove down to Phoenix.  While there my son and I rented a bike and rode the Superstition Mountains just east of the city.  Having done some research, I thought I’d try buying a leather bike jacket while down there as US prices tend to be much kinder than Canadian ones.  I ended up with a Bilt black leather bike jacket that I’ve used on cooler rides since.  It’s not high tech protection wise but the leather is thick and the jacket is a solid thing.  It was the last of the 2014 designs and I got it on sale ($159!) as they were wrapping up their Christmas shopping season at the CycleGear shop in Mesa.  Your typical excellent American sales service too. 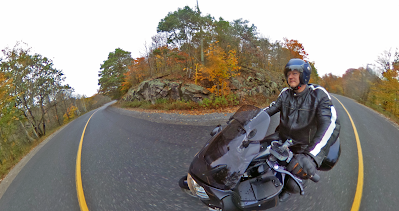 Since then I’ve done thousands of miles with the thing and it has always done the job.  It isn’t well vented so it tends to do early spring/late fall duties.  This past fall on my last big ride of the year I was wearing it for the 270km ride up to Deerhurst Resort and then it handled a torrential downpour when I rode into Algonquin Park the next day.

It was all good until on the way home I undid the zipper and it came off in my hand when I stopped for a drink before heading back south.  I managed to get the zipper to reconnect so I wasn’t flapping all the way back, but a broken zipper meant the jacket couldn’t be used anymore, which made me sad.  What followed was a deep dive into zipper technology as I attempted to fix it. 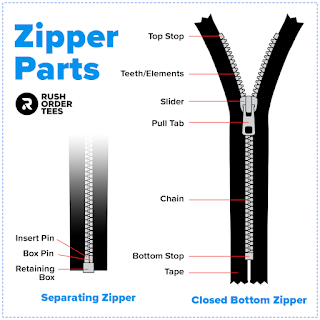 Some online research had me filling my head with new zipper related vocabulary.  The retaining box on the jacket had come off when I pulled the zipper down.  Most of the online advice (which turned out to be right) suggested that you can’t fix a broken box, it requires a zipper replacement, but on a thick leather jacket that seemed like a bit much.  Of course, Amazon sells crap that insinuates that you can fix a broken retaining box, so I wasted money buying that and then found that it wouldn’t grip and simply didn’t work, even after multiple attempts.

Top Tip:  don’t waste your time trying to fix an old zipper.  It took some effort, but removing the old zipper and installing another is just some work and isn’t impossible.

I finally ended up buying a quality YKK replacement zipper (after learning an awful lot about YKK zippers).  My crafty wife has all the sewing kit so she gave me a seam ripper that made removing the old thread very easy.  If you’ve got an exacto knife or craft blades and steady hands you could probably remove the thread that way, but the seam ripper does it without damaging the material.  With the old zipper removed and the outer leather separated from the inner liner, the jacket ended up sitting under my work table for a couple of weeks because the thought of pushing a needle through the leather seemed like a bit much, but it’s no harder than other mechanical work (makes your hands ache though). 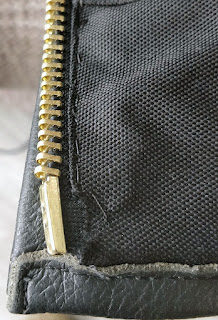 I got some heavy duty coat thread when I purchased the replacement zipper.  This stuff is nylon-rope strong which helped with the sewing, which I did by hand.  The stitching doesn’t look like it’s done by a machine but it’s consistently spaced and didn’t cause any pinch points up the zipper.

I came in through the back lining and out through the existing holes in the leather.  By separating the layers I was able to line up the needle with the holes and then it was just a matter of keeping everything straight as I worked my way up the zipper hole by hole.  Alanna suggested I start at the bottom and work up – that was good advice.

Using the existing holes on the thick hide is the trick.  You might be able to do this on a machine but I don’t know how you’d do that as the jacket material is thick and you’d need to align the holes the machine is punching with what is currently there.  Doing it by hand is a bit tedious but it works and means you’re not punching any new holes in anything. 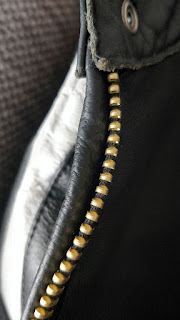 When I got to the top I tucked the zipper (I couldn’t get one the exact length of the old one so got one about half an inch too long) into the collar which had been separated when I removed the zipper thread.  With the top of the zipper tucked into the collar, I sewed everything up using the existing holes in the leather.  Once again, separating the material let me align the needle with each hole one by one.

The final product zips up like new and has no pinching or clumping on the front of the jacket.  Sewing in the other side was easy.  I separated the zipper once one side was in and then  did the other just the same way.  By the time I was wrapping it up I’d gotten quick at it.

Alanna had a thick needle and that strong thread really helped the process.  With a leather jacket the trick is to use the existing holes in the material rather than trying to punch new ones, which in my case meant doing it by hand.  The end result is that my old leather jacket, which now has some nice patina on it, is back in service and ready for the 2022 riding season, should this never ending winter end. 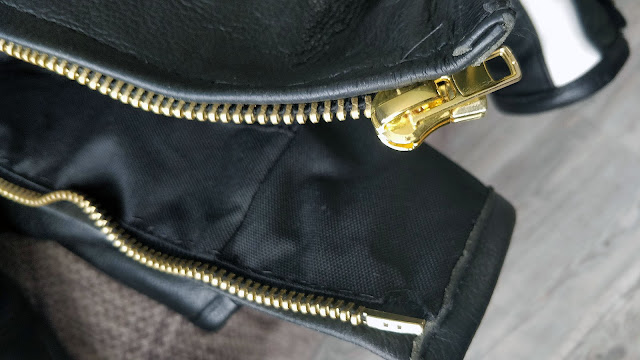 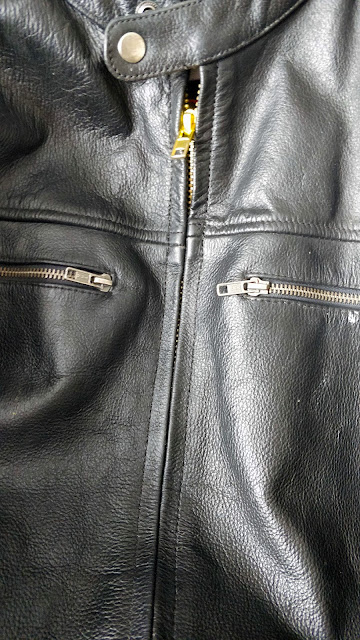 If you lose a zipper on your favourite old motorbike jacket, don’t toss it out.  A replacement zipper is less than $15 (CAD) and with thread and other odds and ends you should be able to replace that tired zipper with something that’ll let you enjoy your well loved leather jacket for years to come.