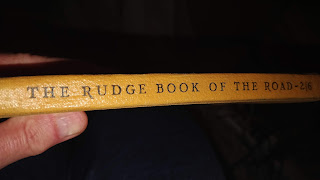 I was reading Classic Bike Magazine last month and one of the auctioneers in the back of the mag suggested getting my hands on a copy of The Rudge Book Of The Road if you are looking for an historical read that’ll get you through a long winter and prime you for the coming springtime.

I had a look around and finally found a 1926 version of the book on Amazon for about thirty five bucks.

Reading a book that’s almost 100 years old gives you a perspective on motorcycling that you might not have considered before.  At one point the author talks about how much Rudge has learned from building motor-bikes over the past 17 years.  I found myself becoming conscious decades of development that since went into my current 1971 Triumph Bonneville project and then continued on for decades more as found in my modern Triumph Tiger and Kawasaki Concours.  A bit of historical perspective is a powerful thing when you’re hands on with the engineering found in modern motorbikes.  With nearly a century of continuous development, reading about motorcycling from the dawn of the sport is good mental exercise.
The Rudge Book of the Road takes me back to a time when my grandparents were children and, as a modern reader, I’m left struggling to find a frame of reference in our overcrowded and mechanized world.  There were a quarter as many people on the planet when this book was written and internal combustion engines were in an early phase of rapid development as they revolutionized and democratized travel for more than just the wealthy.  This book makes a point of recognizing this exciting period in history: 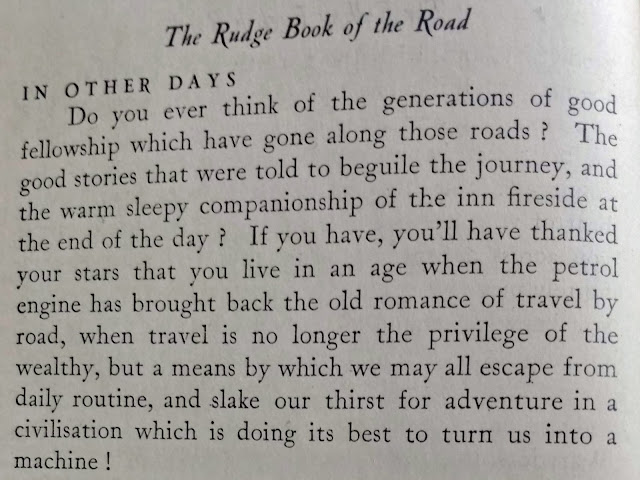 Traffic jams and the expectation that everyone be commuting in motor vehicles in an increasingly crowded and polluted world makes this perspective feel particularly alien in 2022.  Can you imagine thinking about motorbike travel like this?  If anyone could do it, it’s motorcyclists – we may be one of the last vehicular subcultures that clings this kind of romance, even as the vast majority drive their appliances without a second thought for how they work or experiencing any inherent joy in the activity.
Having lived with rough ‘colonials’ for most of my life, some of the language in this very British book made me smile.  It was written for Rudge Whitworth as a sales tool but it leans toward the romance of riding as a theme throughout.  Rudge themselves lasted until 1946 before they stopped production, so you’re reading a book by a company that hasn’t existed in over seventy years, which further makes reading this feel like an echo from a distant and unknown past: 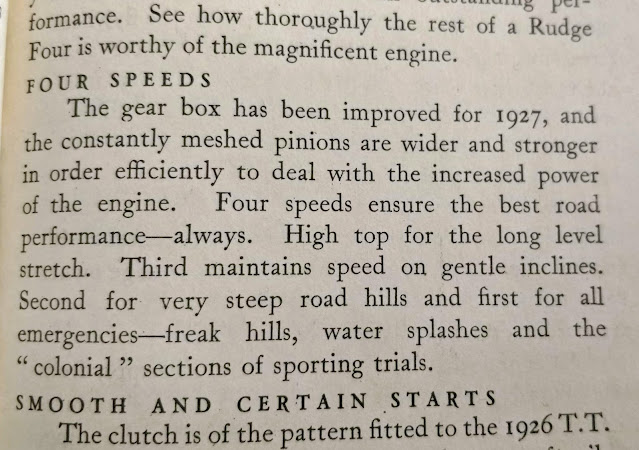 The state of the art in terms of motorcycle engineering was making major steps in the 1920s.  Earlier bikes had you oiling the motor as you rode it.  Too much and it would clog the spark plugs and leave you on the side of the road having to clean your plugs, a job most modern vehicle operators would have no idea how to do.  Too little oil and the engine would seize, possibly tossing you down the road.  This degree of involvement in motor vehicle operation was being phased out in the mid-nineteen-twenties bringing more people into the moto-fold.
The idea of sitting down with your new machine and understanding what it needs and how it works is a foreign one in 2022, but Rudge makes this process seem almost meditative.  The idea of lighting your pipe and comprehending your new machine in your shed still appeals to a few of us.  Perhaps this is another of those colonial distinctions.  I have no trouble finding programs on industrial history and engineering when I watch British television, but Canadians seem more focused on resource extraction and office work than they are with understanding how things work and then manufacturing them.  This sort of mechanical sympathy will sound particularly foreign to Canadian ears: 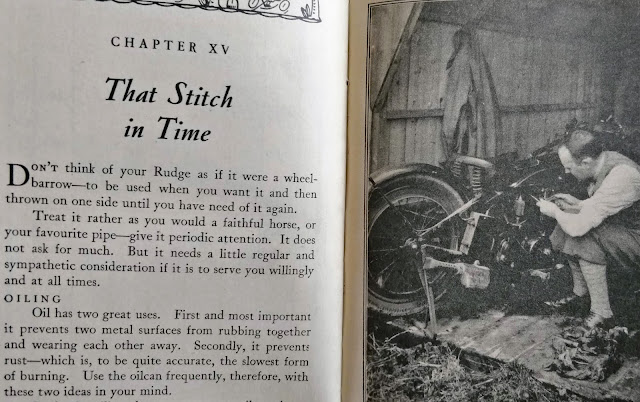 This old book doesn’t limit itself to motorcycling mechanics.  If you’ve never camped before they offer advice for those new to sleeping on the ground.  Rudge made sidecar outfits and even a trailer/caravan for people interested in taking everything with them. 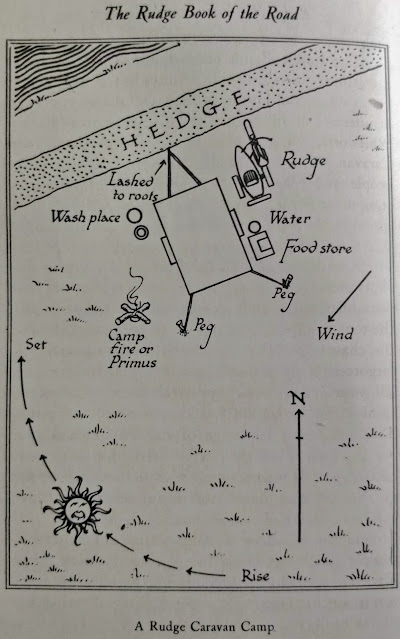 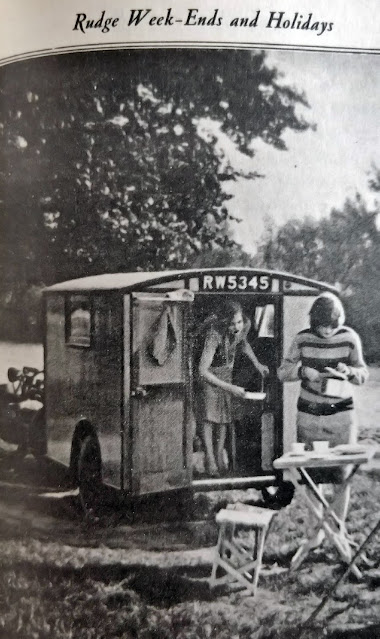 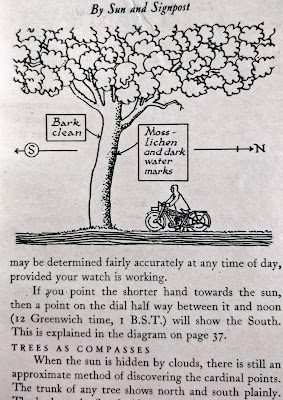 When your trusty leather bound Rudge Book of the Road isn’t teaching you how to moto-camp, it’s explaining how the roads you’re riding on might be built on top of old Roman roads or how to identify the architecture of the historical buildings you’re touring past.  This makes me wonder whether Rudge’s target audience was perhaps a bit more educated than your typical rider, but it also makes me wonder if maybe people were just a bit smarter back then without a phone to immerse them in social media in all the time.

The book doesn’t stop at camping or architecture and goes on to teach you how to forecast the weather, tell direction and even tells you where the biggest hills on the island are so you know what gear to tackle them with.  It then provides charts on when the sun rises and sets so you know when to turn on your new-fangled electrical light.  Rudges were one of the first to go electric.  A few years earlier you were lighting a gas powered lamp on your motor-bike before proceeding into the dusk on mostly unfinished roads (while remembering to give the top and some oil).  There are (many?) riders now who have never turned a wrench or put a wheel off pavement.
There is another chapter written by F.A. Longman, Rudge’s rider in the 1927 Isle of Man TT road race.  He writes with a racer’s urgency and puts you in the rider’s seat as he talks you around the T.T. mountain course while it was still young and relatively new.  It’s amazing how little has changed in the racer’s mindset even while they’re using machines that have only just recently become mechanically self contained.  They were seeing huge leaps in speed as technology improved and riders came to terms with what this new technology was capable of. 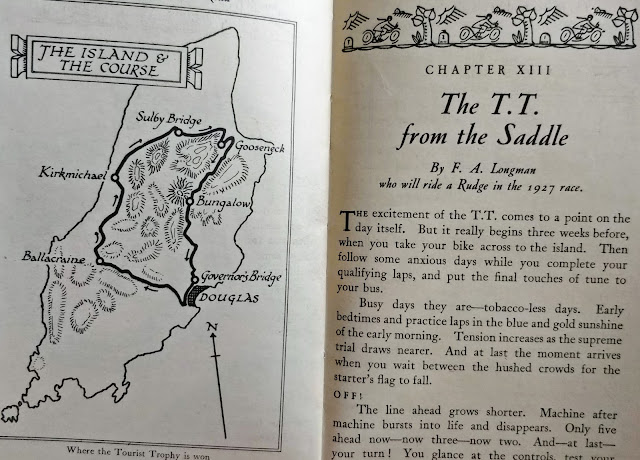 After teasing you with the Isle of Man TT, the RBotR then gives you some 1920s style advice on how to get ready to compete in trials and perhaps even go road racing with your motorbike:

Give up the cigarettes and alcohol entirely, but do keep the pipe smoking!  Can you imagine modern, liability-driven manufacturers encouraging riders to do this sort of thing on their new motorbike?  It’s difficult not to get swept up in the enthusiasm and possibility of riding at a time when it was still new to so many people, including the people who built the things!  The lack of caution is exhilarating.

The book ends with a complete set of colour maps of the United Kingdom, but not before it talks you through buying your Rudge (this is a marketing piece, remember?).  Your fifty pounds (about $1350CAD in today’s dollars) gets you the base model of the Rudge Four – for ten pounds more you can get the sport model.  New bikes were much more accessible back in the day!
The final gift this old book gives you is a list of future readings if you’re interested in motorcycles and travelling on them: 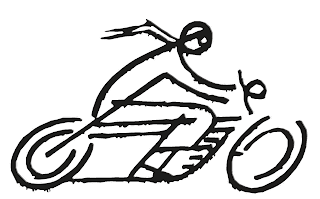 The Rudge Book of the Road was such an interesting read that I’m going to keep digging for some of these other historical moto-reading options.  The RbotR suggests slipping one of these in your (tweed?) jacket pocket to read when you get to your destination and finally put your feet up – with your pipe, of course – after another exhilarating day of riding in the dawn of motorcycling.

A more modern motorcyclist philosopher, Matt Crawford, described riding as “a beautiful war“, the Rudge Book of the Road shows that it has always been thus.  If you ride, you’ll find this a familiar and enjoyable refrain.