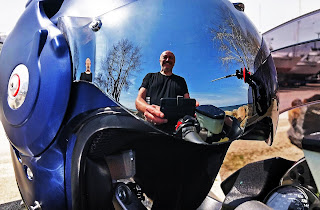 We had a break in the Canadian winter (in April) and I finally got a chance to exercise the Concours.  This jaunt took me over 250kms from where I live in the tedious industrial farming desert of South Western Ontario, an hour up to the road to the edge of the Niagara Escarpment where I have a small chance of finding a corner to ride around.  It usually gets colder by the lake, but contrary to physics, it went from 12°C when I left up to 27° by the lake.  It only dropped down into the low 20s again once I found some altitude on Blue Mountain (a hill anywhere but in Ontario).

I had the 360 camera along for the ride and put together a montage using an incredibly complicated process that involves batch processing the 360 panaramas into ‘tiny planet’ images and then clipping them all together in video editing.  It isn’t for the faint of heart, but it sure looks unique.  This is the how-to if you’re feeling brave.