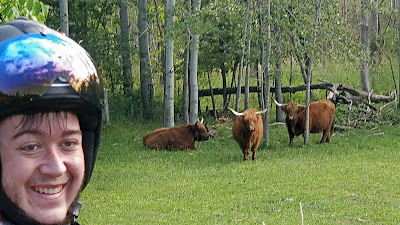 I’ve been riding for over a decade now on a lot of different bikes and I’ve never had a flat tire.  A work colleague got one once and it made her quit riding, so the terror of riding a motorcycle with a flat has always had an inflated (ha!) place in my mind.

Last week my son and I went to look for hairy cows (highland cattle up by Creemore) on two wheels.  The mission was a success and after a quick lunch in Creemore we headed home.  A stop for a stretch in Grand Valley must have picked up a nail as once we were back in motion the tire sensor started flashing on the dash.  It should have been more obvious that a catastrophic tire failure was under way except the Kawasaki was also in a panic about being low on fuel.  Whoever did the dash layout for the C14 didn’t have a good grip on digital ergonomics (a rapid tire decompression shouldn’t be vying with early low-fuel warnings on the screen).

I started to feel the back end get squishy so I slowed down and pulled over once I’d sussed out what the panicky dash was trying to tell me.  With a 200lb+ passenger on the back this was the worst possible getting-a-flat scenario, yet I found it very manageable.  I like to think all that time at SMART Adventures getting used to a bike moving around on loose material helped.  We pulled over, the tire was very flat, so we unloaded and then I pushed the bike off the side of the road and into the grass.  We were on a country road so there wasn’t much of a shoulder and everyone was steaming by at 100kms/hr.  I then got on the phone trying to find anyone local who could give us a hand.

My wife was heading out to ballet but a friend in town, Scott, was around and offered to come out with some spray filler to get us home.

It was a nice day for a flat in a lovely part of the world.  Potatoes were growing behind us and cows grazed across the road as the sun streamed down.

Scott was there in a flash.  I removed the topbox and Max and it went with Scott in the car (no point in putting more weight on a bad tire than necessary).  The spray filler went in and bubbled out of the hole and the bike’s pressure sensor said I had 5psi.  Perhaps the foam expands as the tire spins and heats up?  Scott and Max followed me as I took it slowly down the road toward the village of Belwood, but the fill-in-foam did bugger all.

I was only a few minutes in motion but the tire pressure fell off to zero again and the tire was starting to come off the bead, so I pulled over on the edge of the road in Belwood.  Scott and Max went back to Elora to see if he could borrow his neighbour’s trailer to get the bike home, but I was in my hood now.  Belwood is the edge of the catchment area where I teach and teaching generations of people here means I’m connected, even when I don’t know it.

The guy mowing his lawn across the street came over and said he had a portable air compressor and some tire plugs and would I want to give it a try?  He came back a minute latter with a rusty old plug kit and the air pump and as he plugged the hole we discovered that he was the uncle of one of my top students (the kid’s going to German to do IT this fall!).  He waved me off when I offered to pay, but a bottle of Glenfiddich is coming his way next time I’m passing through there.  Scotch is cheaper than a tow and I’d like to cultivate what little small town spirit is left in our rapidly urbanizing county.

The Concours uses tubeless tires on alloy rims, similar to a car, so the plug did the trick and the portable air compressor he had put 20psi into the tire which held all the way home.  I stopped half way and texted Scott that I was in motion and they met me at the house.  I took it slow and steady but the bike felt fine even at half pressure.  If you’re frantically worried about getting a flat on a motorcycle get some off road training, it’ll make you comfortable with the squirming.

Jeff the motorcycle Jedi suggested getting an all-in-one micro-sized puncture repair kit and suggested the Stop And Go kit which includes all you need for plugging including a mini pump that you can clip onto your battery for under $100.  Packs up nice and small too so throwing it in a pannier is no problem.

As for tires, I ended up going with Revco and getting a single new rear tire rather than doing both.  When I got the C14 it had a relatively new (2019) front tire and much older rear on it.  The front was still nicely rounded (no flat spots), so it stayed on.  I didn’t want to mismatch tires so I stayed with Michelin Pilot Road 4s.  If you want a COVID inflationary kick in the head, the rear tire cost $235 when I looked it up last summer.  Your latest inflationary price (Aug, 2022)?  $274.  That’s a 16.6% price jump, aren’t economics fun?  I can’t imagine what the dealership is asking these days, probably five hundred a tire installed. 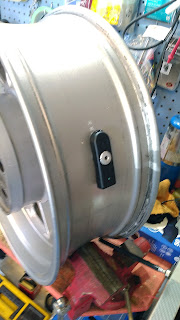 Revco did its usual excellent job getting the tire out (it was here less than 48hrs after ordering).  Installation was straightforward and gave me a chance to clean up the rear end and shaft drive which I hadn’t been into yet.

Here’s where things get even craftier (or Norfolk stingier if you like).  I like mechanics, but like my dad before me, they also scratch a why-spend-money-when-you-don’t-have-to itch.  The tire pressure warning system has been flashing low power warnings at me since I got the bike.  I looked up replacements and they are an eye-watering three hundred bucks or more a piece, then I did some research and found this handy video where the guy dismantles the sensors and solders a new lithium battery in.  Recommended?  Not unless you’re really handy soldering (lithium batteries don’t like a lot of heat).  Fortunately, I’m handy with soldering.

The TPMS (tire pressure measurement system) is a wireless sensor screwed into the valve stem and held in place with a big hex bolt.  It sends a wireless signal to the dash once the bike is in motion which gives you your tire pressure in real time.  Removing the sensor is easy enough and taking it apart equally so (there is a torx head bolt under the sticker). 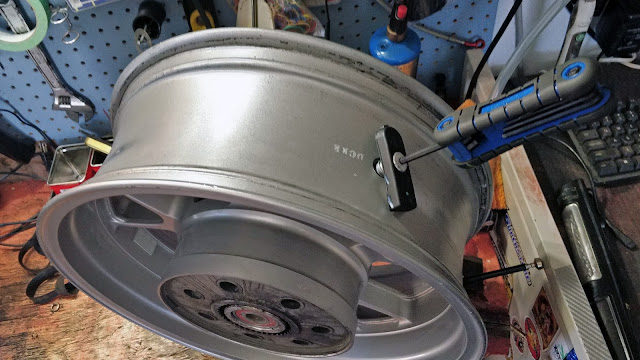 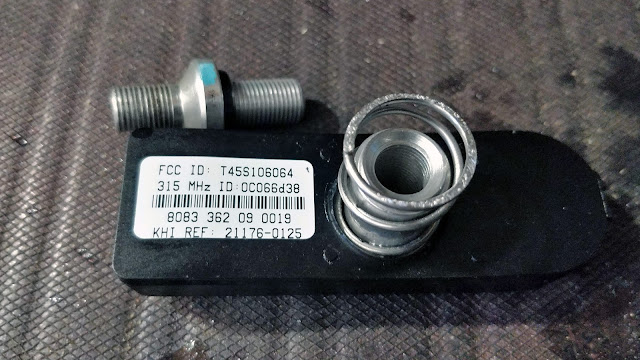 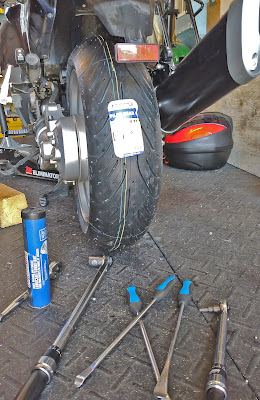 The new tire went on without any headaches.  Compared to the winter install of the tubed tires on the Tiger, it was a much easier summer job.  No inner tubes to wrangle and (after leaving the tire in the sun for 10 minutes), everything was pliable and easy to stretch over the rim using tire spoons.

I was worried about the tire not inflating if I didn’t have a tire installer with rapid inflation on it, but I needn’t have worried.  Perhaps the Armour All helped (I used it on the rim edge as a lubricant), but the tire started to take in air with a bit of jiggling and once it started filling, at about 20psi the edges popped out onto the bead and were airtight.
I set the tire pressure to 42psi and went for a ride around the block and then up and down the river (about 20kms).  Everything it tight and working well, including the tire pressure sensor – no more low power warnings!  I’ll do the front one when I eventually replace the front tire the same way.  A new tire always feels fantastic (like a newly sharpened pencil if you’re older enough to know what that feels like) with the bike feeling friskier and more willing to drop into corners.  The new tire is a 190/55 rather than the stock 190/50 and it subtly shifts weight forward by lifting the back end up a touch – it felt good, and is a bit less crashy on bumps too (a bit more sidewall means a bit more flex).
Thanks to Steve A on YouTube for some genuinely useful help researching the tire pressure management system and how to hack a fix.