I’ve been wondering why motorbikes don’t seem to have moved on in the way that cars have.  To that end I’m trying to find comparisons between 1960s (pre-oil crisis) vehicles and current vehicles.  In trying to keep apples with apples and find stats for similar vehicles.  The problem is a 1960s Cooper Mini doesn’t have anything like the crash worthiness of a new Mini Cooper, and that crash worthiness costs weight, though not as much as you might think.  The real cost in weight is our expectations around size.  The new mini is significantly larger mainly because minimalist, small cars don’t sell.

Our improvements in engineering efficiency are often overshadowed by our need for bigger, more plush vehicles.  My thinking is that this shouldn’t be such an issue on a motorbike, it’s not like our bikes have gotten much bigger in the way that cars have turned into SUVs.

An example, the Mini Cooper.  The new car has nothing mechanical whatsoever to do with the old one.  Other than the name and marketing niche, these cars are very much creatures of their times. 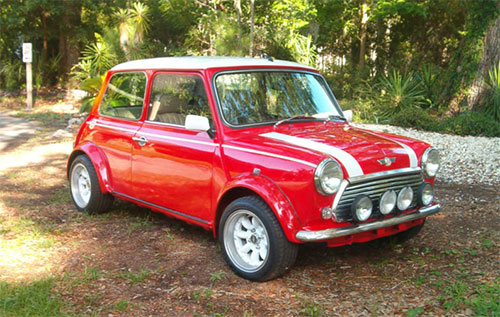 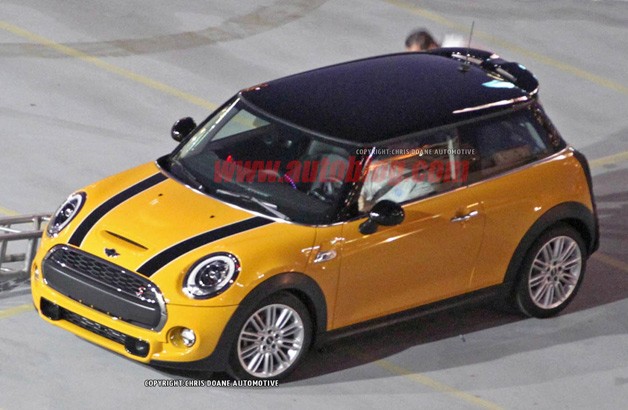 So what you’ve got is a much bigger car that offers all the modern amenities in addition to more space that gets about the same mileage, and it does it with an engine a third larger than the old one.  Put another way, the new Mini is about twice as efficient as the old one (it uses the same amount of fuel to move almost twice as much car).  On top of that Mini needs three less cc to get a horsepower out of an engine.  It isn’t much, but it’s an improvement, unlike the bike below. At 1140cc, the new Honda is 390ccs larger, though follows the same engine layout as the old CB750.  They are within 3 cms of each other as far as wheelbase goes – bikes aren’t significantly physically bigger in the way that four wheeled vehicles have put on weight in the past forty years, though cars seem to have done it while finding ways to get way more out of each litre of gas.   That new mini is a much bigger vehicle, almost twice the size of the original in terms of mass.  Bikes haven’t grown anything like that, yet their mileage is pretty much the same.

Keep in mind we were comparing a twelve hundred cc 1969 Mini with a 1.6l modern Mini, a 25% increase in displacement.   The new CB1100 has 33% more displacement on a heavier bike and gets the same mileage as the old carbureted one.  Why is the new bike so much heavier?  It’s not like a car – it isn’t larger than the old bike, it isn’t carrying airbags and all sorts of other modern safety gear other than ABS.  To top it all off a carburetated 1969 CB750 used to use 10.82ccs to make a horsepower, the new one uses 13.8ccs to make a horsepower.  A lot of that could be tuning the engine for more torque, but here we are, 45 years later using more displacement to make less power?  What the hell is the point of fuel injection?

If you say the motorbike vs. car argument isn’t fair, how about motorbikes to bicycles?  A Tour de France bike in the 1960s weighed about 22lbs.   Modern bikes are limited to 15lbs, though in 2004 Armstrong had a 14.5 lb bike and without the limit a 10lb bike is more than possible.  If bicycles have dropped 30% of their mass in the last 45 years, why not motorbikes?

If we look at this from an automotive/bicycle equivalent efficiency angle, the new Honda CB750 should have a 20% more efficient engine and weigh 30% less.  The 2014 CB750 happy memories bike should get about 80mpg, weigh 344lbs and produce about 82hp.  This bike would have a power to weight ratio of about 4.2lbs per horsepower, approaching what some of the fastest sports bikes in the world have.  The sensible choice then would be to make the bike a 650cc CB throwback, which still produces a  better power to weight ratio than the CB1100 and weigh even less with the smaller engine.

I asked before and I’ll ask again, why haven’t bikes advanced at the same rate as cars (or bicycles)? Why isn’t the new ode to the CB750 a CB650cc bike that produces more power, uses less gas and rides far better than its prehistoric inspiration?  Motorbikes are stripped down, simple machines, in many ways still very similar to the machines made decades ago.  With that in mind, why don’t we see the radical evolution in technology evidenced in the Mini and in racing bicycles in the past 45 years in the Honda CB750/CB1100?  If we aren’t larding up bikes into SUVs (though some people are), the efficient burning of gasoline should have produced astonishingly high mileage numbers by now.  Where is the direct injection? Where are the intelligent drivetrains and engine management systems that have produced cars that weigh twice as much and still burn the same amount of fuel?  Where is my frictionless magnetic drivetrain with integrated brakes?  Where is my kers?


With an integrated kers system, I could be riding a 400cc bike that when the kers kicks in feels like a 1000cc bike, then recharges while I ride.  I could pull onto the highway or overtake on a super light bike that can feel like a one litre rocket when I need it and sip fuel like a 400cc machine when I don’t.

Because motorbikes are small and inherently efficient compared to cars, manufacturers haven’t pushed engineering limits in the way that they have with other vehicles.  I’m looking for the future of motorbiking, and it doesn’t feel like manufacturers are testing limits in a way that makes my choices feel any different than they were a decade ago, let alone four.