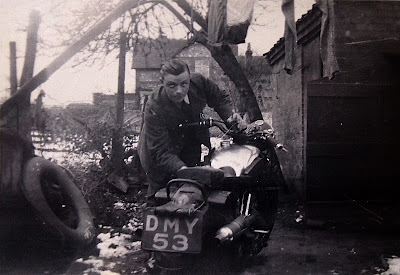 Since seeing pictures of my granddad on a motorbike I’ve been curious about my family history with bikes.  Knowing that bikes have been in my family for generations is kinda cool.  When home in August I got to see some more bike-related family history.  My Uncle had a couple of albums I hadn’t seen before that had some fantastic pictures in them.  It’s always nice to see pictures of Granddad, and seeing him working on his bike was wonderful.  I guess if you rode a bike in the 1940s and 50s you spent some time making sure it was running right, or it wasn’t running at all. 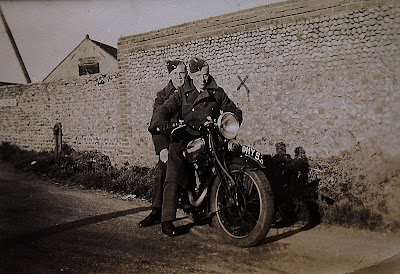 There were also some pictures of my Granddad Bill in his RAF uniform on a bike.  With war-time scarcity, getting around on two wheels was the way to go.  I imagine the RAF used bikes extensively as personal transport. Granddad rode in their motorbike tatoo – doing stunts and coordinated high speed riding in huge groups. 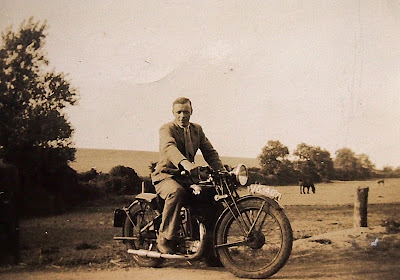 I love the poses; the bikes, the suits, and some rural Norfolk scenery!  No doubt that Granddad Bill loved his motorbikes!  I can remember him letting me sit behind the wheel of his lorry and steer when I was four or five.  I wish I’d been around him longer. 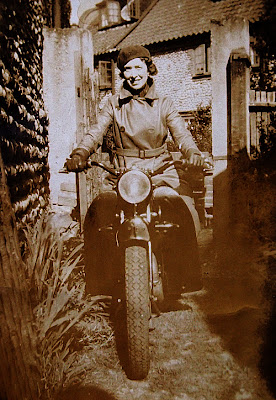 The bit of family history I didn’t know revolved around my great Aunt who rode a bike too!  She was a single woman who was a serious rider at a time when women didn’t really remain single, let alone bomb around the countryside on motorcycles.

I loved hearing about her, and even when I discovered that she died in the saddle in a motor accident I was glad to have learned about her.  I wish I’d have known her.  I feel like the family I have who are into bikes are far from me.  I also talked to my cousin who owns a Fireblade and a BMW R1200.  It was nice to have a bike talk with family members, though I feel like the ones I most wanted to chat with aren’t with us any more.