Originally published on Dusty World in June of 2015:

Last semester I had an energetic grade 9 suddenly stop his interaction with the internet and wonder out loud (and it was asked in all seriousness):  “why is it in video games and movies old people are so cool, with hidden knowledge and special powers, but in real life they just suck?”

He received an avalanche of ‘how could you say that?!’, but then everyone went on to say how wonderful their grandparents were.  Everyone loves their grandparents, but no one was willing to defend age and by extension experience in and of itself.

When this African proverb popped up I immediately felt the pinch of that class discussion (yes, I know, we were talking about the value of age and experience in a class where I was supposed to be teaching computer engineering, I guess my kids won’t be ready for whatever standardized test they invent for it).

What role does age and experience have in the information age?  This proverb also refers to libraries, which have been facing their own test of relevance thanks to the Googliable nature of information.

Information technology has made personal knowledge irrelevant.  The life experiences of human beings have become meaningless, replaced by internet searches.  Why would you bother to ask your grandfather how to change the brakes on your car when you can just Google it?  Once a useful source of information, the elders around you are now objects of affection and little more, they serve no function.  You can get the information you need without any of the static (anecdotal stories that accompany the information).  This sanitized, machine driven version of knowledge has many benefits.

You can reduce complex human knowledge (for example, the development of literacy) into simplistic, easy to quantify standards and then make sweeping suppositions about the results.  Banal opinion based on internet ‘fact’ is the new intelligence.  Like any opinion you hear online, carefully crafted grading schemes end up becoming the truth, which fits nicely into the antiseptic version of knowledge the information age peddles.

Another benefit is the downward social pressure on human communities.  When you plug people into a centralized source of information you wean them from the social necessities of family, community and even nation.  When no one needs anyone else (but they do need an ISP), you have removed all the social static and laid the groundwork for a kind of hypercapitalism that will make past look like the middle ages! 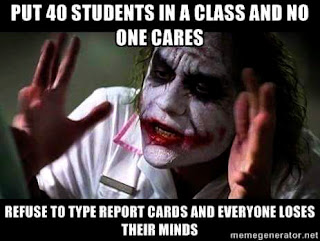 When we try and argue for meaningful learning (in anything other than a poster), we are met with educational administration making sad faces and saying it’s not viable.  The reasonable provision of caps on class sizes is just such an attempt, which is why the meme on the right goes straight to the heart of this issue.

Tangible data that grossly oversimplify human endeavour are how we roll nowadays.  As the poster states, class caps mean nothing, but fail to hand out a piece of paper with grades so abstract that they are meaningless along with computer generated comments, and ‘everyone loses their minds!’

There is some push back against the dimensionless facts that drive the information age.  You find it in the physical world in grass roots movements like slow food or maker spaces where you see individuals trying to wrest control of production from the hands of remote systems.  In these places the idea of human interaction is key to the process of learning.  They are trying to build communities in an arid digital landscape that is bereft complex human interaction… unless they are under a corporate banner; communities designed for marketing purposes.  What would be the economic sense in creating a community solely for the benefit its members?

Ironically, human interaction is less and less a factor in human education.  The push to integrate technology into pedagogy without considering its implications has infected education systems with the same efficiency that we now enjoy everywhere else.  We can hardly expect the personally demeaned yet highly efficient funployees in the private sector to demand anything other than consistent menial labour, it’s what they do.  Developing complex personal relationships in order to effectively mentor and teach aren’t very efficient/economically viable.  They are certainly discouraged in th 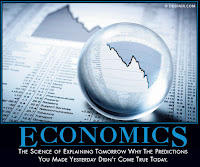 e brave new world of 21st Century education where teachers are now facilitators, reduced to getting out of the way of learning and making sure the #edtech is working.

One of my students from many years ago is now out in the world.  She was sitting in a restaurant a few weeks ago watching two employees, a teenage girl and an older woman on their break.  The older woman kept trying to start a conversation.  The teen ignored her, buried in her phone until she finally snapped, ‘What? What do you want?”  She was incensed that this woman had interrupted her texting time.  She was probably in withdrawal because they don’t let her have the phone while working.  I can bet which one of those two employees gets better performance reviews, though she sounds like an ass.

Maybe human experience is meaningless nowadays.  Maybe old people are useless and libraries are a waste of space (great idea: replace every one in school with franchise coffee shops to balance the books!).  Maybe we don’t need each other to learn any more, it’s certainly not as efficient.

Watch the new efficiency infect the UK’s Labour Party
“In 2015 we are living in a cold, cruel, and desolate country in which benefit sanctions, foodbanks, poverty wages, and ignorance reign, governed by a clutch of rich, privately educated sociopaths whose conception of society has been ripped straight from the pages of a dystopian novel.”