Originally published on Dusty World in March of 2019:  https://temkblog.blogspot.com/2019/03/whats-in-name.html

Last year we drove across Canada.  We were having breakfast in Drumheller, Alberta when a big family came in.  The grandfather/patriarch of the family was talking to a granddaughter he obviously dotes over.  She was going into high school the next fall and he asked her what she was looking forward to and she said, “wood shop!”  He immediately responded, “why would a pretty girl like you want to do that?”  She did the only thing she could think to do without causing a scene and laughed.  I didn’t laugh, I was staggered by that exchange.  Welcome to the world of #girlsinSTEM. 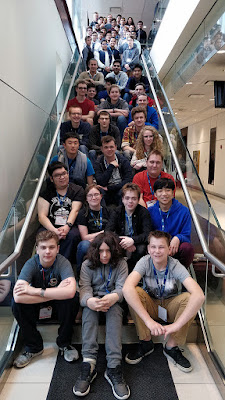 We’re taking our second run at the CyberTitan cybersecurity competition this year.  Last year’s success suddenly meant a surge of interest, so I was able to quickly put together two teams.  When none of them were female (again), I started asking the keenest girls from my junior classes if they would be interested in forming an all-female team.


Cyberpatriot, the competition that Canada’s CyberTitan works out of, has also recognized how few women there are in STEM in general and information technology / cybersecurity in particular, so offered to waive the application fee for all-female teams this year.  At national finals last year an ICTC organizer noted how few girls were in the competition.  With that observation and support I was able to convince six of my strongest former grade 9 girls to give it a go.


Early on I noticed how differently they approached the intensity of the competition from the two boys teams.  Where the boys tended to specialize and generally work independently, the girls were constantly conscious of how everyone on the team was contributing and were always finding ways to integrate each other into what they were doing.  In some cases, members of the male teams did very little, but none of the girls were so relegated.


All three teams were new to this (all of last year’s team graduated), so no one had previous experience of the competition, but the sense of ownership was much more absolute with the male teams.  That sense of male ownership and dominance has been an ongoing theme in teaching technology – I’ve been writing about it for years. 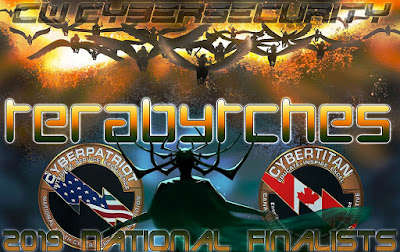 One of my standard team building approaches is to encourage the teams to name themselves to help bring them together.  Both male teams took names that were almost an afterthought because they were only loosely teams and didn’t feel like it mattered, because it didn’t – they all feel empowered and capable.  The female team came back to me with something that spoke to their experience, charged them up and caused a sense of belonging vital to survival in such a difficult circumstance.


I have to admit, the name did cause me to pause, but my first reflex was to support this sense of edgy self-identification, especially when I saw how it unified the girls and helped them deal with the pressures on them.  I passed on the name to admin and it was ok’d for competition with no discussion, which surprised me a bit, but also delighted me because it meant (I thought) that the the difficult circumstances of this team were being recognized.


A byte is 8 bits of information – typically a byte is used to denote a character in a computer using ASCII code, so each letter you see in this blog is a byte of information.  A terabyte is an almost inconceivable number of bytes – about a trillion of them.  How big is a trillion?  If you spent a million dollars a day since year zero to now in 2019, you still wouldn’t have spent a trillion dollars.  It’s a powerfully big number used in the male dominated field of computer technology to denote massive amounts of memory.


The girls’ team came upon the idea of combining terabyte with bitches into the Terabytches.  I doubt the grandpa telling his granddaughter to do girl-appropriate things would approve, but anyone with any degree of feminist sympathy would recognize the power in combining a traditionally derogatory term used to limit and belittle women (especially smart, vocal ones) with a powerful technology term from deep within tech-bro culture.

The Terabytches put up with the condescension (most of it unconsciously delivered without malice) of their male colleagues throughout the competition by looking after each other and generally ignoring it.  In our conservative, rural school, the idea that tech is for boys is firmly entrenched in spite of my ongoing best efforts.  At one point one of my seniors who is also an engineering lead (and a genuinely nice kid) said, “why are there so many girls in here?” at lunch one day.  There were two girls in a room of 20+ people.  I immediately called him on it and said, “you mean the two girls in here are too many?” and he quickly backpedaled, but the assumptions implicit in the comment still echoed around the room. 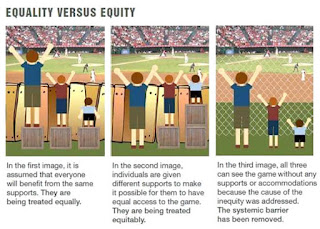 My male teams both did very well in this competition, but at no point did they ever feel like they shouldn’t be there, the girls frequently questioned their presence in it.  This was a subject that boys did in a room almost always full of boys.  Even in my most gender diverse class I’m lucky to approach a 20/80 gender split, most are much less.  Many of these culturally enabled boys will go on to successful careers in digital technology while being told, ‘atta boy’ by family and friends.  Meanwhile, girls are being asked why they are wasting their prettiness on technology… and that’s the nicest kind of negativity they’ll get.  More often it’s outright dismissive chauvinism.  The fact that they had each other to lean on allowed them to battle on in a chauvinistic field of fierce competition.


I had a female teacher tell me last week in Ottawa that she won’t run all-female teams because it’s unfair unless all of her students can participate.  That kind of pick-and-choose-equity when it comes to fairness is very frustrating to hear, especially from a female colleague.  When we don’t live in a remotely equal society, saying that everyone should get the same supports is really code for maintaining status-quo prejudices.


The chauvinism the Terabytches face hasn’t been limited to passive aggressive face to face situations.  When we discovered that they had gotten through to nationals and neither of the male teams had, the first thing out of most of the boys was, ‘they only got through because they are girls.’  My response would be, ‘they got as far as they did in a workspace and field of study that they were continually alienated and dismissed by.”  That included barbed comments from anonymous people online and having to study material written almost entirely by men for men while competing in a contest created almost entirely by men for men.  A better question would be, with all of those advantages, why didn’t you boys do better?  The Terabytches finished right behind our senior all-male team in points and beat them in some aspects of the contest. 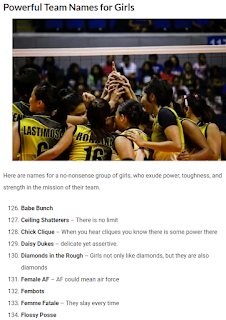 Picking a sharp name that counters stereotypes is not only a smart move from a competitive point of view, it also highlights all of those assumptions people make around gender and technology.  Boys teams can name themselves after generally european rapists and murderers, often with names that glamourize the violence.  They can be raiders with creepy viking logos and (white) crusaders battling (brown) infidels, they can be marauders and pirates, cavaliers and knights.  Pick your strong male historical context and there’s your team name.  The male culture of team naming also likes to identify with violent animals and revel in that association with male predators.  If you see a bird logo it’s a male-centric one.  The cardinals are red, the blue jays are blue, the orioles are orange and the falcons are big and burley and aggressively male in appearance.  If you want to go mythical, you’ll see all sorts of griffins, dragons and argonauts, but medusas, sirens and harpies?  Not so much, because the connotation is different.  History and culture aren’t kind to strong female stereotypes.  When ‘babe bunch’, ‘daisy dukes’ and ‘fembots’ are in your list of ‘top powerful female team names‘, you know we have a long way to go on this.

With media attention ramping up now that the Terabytches are the top all-female team in Canada, concerns have arisen around the name.  Worries about how the media will spin this to create sensationalism are fair, but my first reflex is still one I’m comfortable with, especially knowing how intelligent and outspoken these Terabytches are.  Having any male tell these young women that they can’t create a strong, edgy team name that speaks to their experience in facing obvious and open sexism while outperforming all-male teams from all over the country is something I’m going to dig my heels in about.  Should they face reductive, sensationalist press in the process of being national finalists, I have no doubt that everyone on the team will be a spectacular ambassador for girls in STEM.


Jaime, the reporter at out local paper, had a great interview with the girls the other week.  She has written a newspaper article about it, but it’s only the tip of a thirty minute interview that had the Terabytches talking so frankly about the challenges of competing as girls in such a male dominated contest that I was tearing up.  The fact that they are an all-female team has allowed them to weather the negativity and succeed in spite of it.  Though several of them are very competitive by nature, they all want to reform the team again next year and aim even higher.

Competitive teams tend to double down on the male stereotypes when identifying themselves.  If a female team attempts to do the same thing from their own lived experience, there are questions around appropriateness that start to feel like status quo sexism.  Competing in bro culture of technology in the male dominated world of cybersecurity in a conservative, rural community was always going to be an uphill struggle.  I know the Terabytches are up for it.  I need to lean on the strength of my convictions and back them through the continuous and sometimes overwhelming static.  If every educator approached the sexism systemic in our subject areas with the same zeal, we could eventually level the playing field and let everyone participate on equal terms.


In the meanwhile, I’m proud to be a Terabytch!

Think I’m over stating male dominance in cybersecurity? As one of the most conservative specialties in a male dominated industry, women in cybersecurity face challenges a lot more perilous than an edgy team name. If you’re an ally, be an ally:

https://theeyeopener.com/2018/03/the-history-behind-the-sexist-names-for-ryersons-female-athletes/
Are you a woman in technology? Help ICTC advocate for a more gender balanced field!
https://www.surveymonkey.com/r/Y8NSNKW