A friend’s daughter came by last night because she was interested in The Ninja.  I’m rabidly interested in riding as many different bikes as I can, so when they asked if I wanted to follow along on the Honda Firestorm she’d ridden over I quickly grabbed my gear.  With aftermarket everything on it, the Honda backfired loudly and took off like a scalded rabbit.  The steering geometry on it is very vertical and the grips small, making the bike turn in very quickly even though it feels heavier than the Ninja.  It was definitely a young man’s bike, riding it for more than an hour would be agony, but I totally get it, it was a blast!

The test ride ended up not fitting the rider (she found the Ninja tall and the riding position too upright), but the possibility of Bike2.0 got me thinking…

They have a nicely-looked-after ’06 Concours at Two Wheel Motorsport.  It’s an athletic mile eater that easily 2-ups and is in its element as a long distance tourer.  This particular one is low kilometres (~50k) and well maintained, it would run for ever with no problems.

I’m pretty weight fixated after riding the Ninja and doing a lot of thinking about bike dynamics, and the Concours isn’t light even if it is light on its feet for a big guy.  I was wandering Kijiji yesterday after suddenly facing the prospect of maybe being bike-less and came across another interesting choice.  I’ve been doing a lot of reading on the new VFR800f Interceptor.  This is another athletic mile eater that is at home in the twisties, and at over 150lbs lighter than the portly Concours it plays to my sense of what athletic means in a bike.  I’ve always been a Honda fan, I had a picture of one on my wall when I was a kid, it’d be cool to own one.

The VFR on Kijiji is an ’02, almost half the miles of the Concours for sale and ‘meticulously maintained’.  Not to be an English snob or anything, but the add is nicely written too: 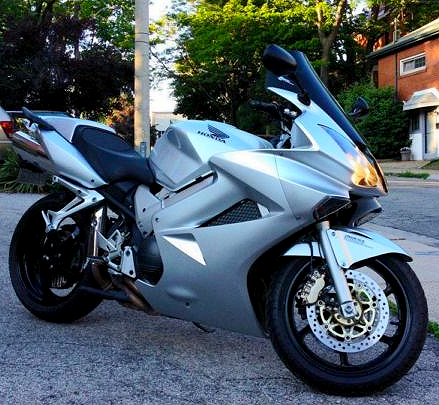 Mint condition, meticulously cared for, very low mileage (28000 km) VFR 800 VTEC with ABS. The VFR 800 has the distinctive single sided swingarm, ABS and the legendary Honda Interceptor V4 engine that is famous for producing one of the most intoxicating exhaust notes of any motorcycle powerplant… it’s music. This bike is just as comfortable eating up corners in the twisties as it is taking you on multi day trips in comfort. It comes with 2 seats, the stock one and a Sargent seat, 2 windshields, stock and a tinted Zero Gravity windshield, solo seat cover, PDF Honda VFR800 Service Manual and a set of frame sliders still in the box. Also installed are the 2006 VFR clear tail light and smoke front turn signal light lenses. $5700 or best offer. 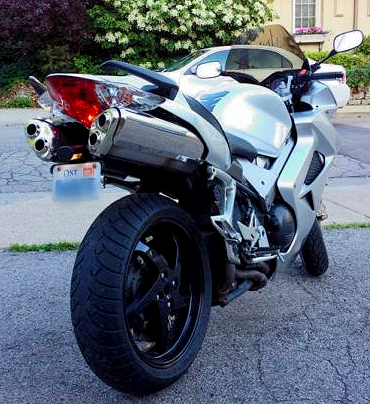 There is something about a rider who knows spelling and grammar that gives an air of competence.  When this guy says it has been meticulously maintained I believe him because he knows the word meticulous (and how to spell it).

I’ve got such an itch for this bike that I’m tempted to give him a call and ride down to Hamilton to give it a go.  I only wish I had the money aside to snap it up if I liked it as much as I think I might.  The process of selling the Ninja means that the VFR might be long gone by the time I’m ready to pull the trigger.