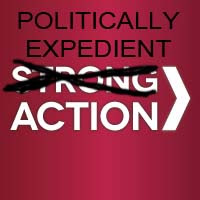 One of those fun things about Twitter is that you can end up communicating with unexpected people.  The other day I got a response from the Press Secretary for the Ontario Liberal party.

We’re in a bit of a mess in Ontario.  Economically we’re on the wrong end of history.  Once Canada’s manufacturing heartland, now that North Americans don’t make anything and just wait for shipping containers to arrive, Ontario has fallen on rough times.

To resolve these economic issues, and perhaps to catch some soft righties in the next election, our liberal minority government has decided that they don’t have to negotiate contracts, can mandate teachers, doctors, firemen and other unions back to work, and will drastically scale back our agreements to balance a budget that got blown to pieces by a financial crisis the public sector had absolutely nothing to do with (bankers aren’t being looked at to chip in on the deficit). 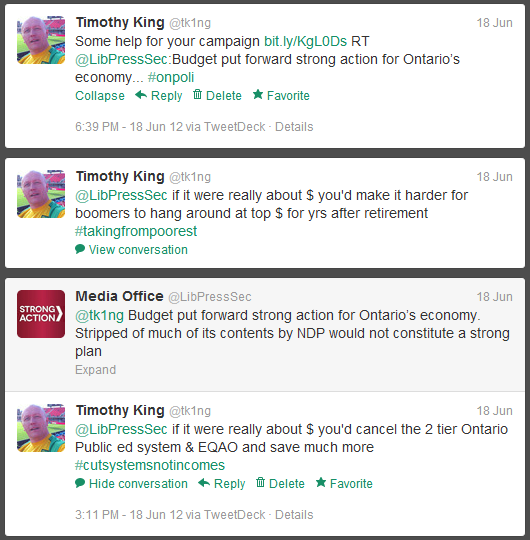 The STRONG ACTION being referred to by the Liberal Press Secretary strikes me as disingenuous. From what I’ve seen of what’s coming, strong action means freezing the pay of the lowest paid teachers and extending the pay grid so that the lowest paid teachers take even longer to make what more senior teachers doing the same work make.
Teachers new to the profession are a pretty easy target.  They have little or no say in the union that will arbitrate the contract and they’re so desperate for work, dangling at the bottom of a seniority system that cuts them first as our population produces less and less kids, that they’re not likely to struggle too much as they get neutered.
My comments on twitter stand.  If this is really an emergency that requires STRONG (or even just drastic) action, then let’s get serious about streamlining the education system without simply attacking its weakest employees.  My greatest fear is that gutting teacher pay will reduce the quality of the profession and ultimately jeopardize Ontario’s excellent record in education.
EQAO is a massively expensive standardize testing system that we brought up from New Jersey that has produced nothing of value.  The US system which is so enamoured with standardized testing has dropped like a stone through world rankings, while Canada and Ontario especially have continued to produce some of the strongest students in the world.  Finland, one of the few places ahead of us, has removed standardized testing entirely.  Instead of cutting the income of thousands of young teachers across the province, that same generation you’re frustrated with for not powering the economy like previous generations did, cut the EQAO, the entire thing, bin it.
Know how many places publicly fund Catholic schools like we do in Ontario?  None, just Ontario.  If we’re really in a financial emergency, why is this a sacred cow?  Amalgamating Ontario’s English Public, French Public, Catholic English and Catholic French schools into one system would allow for economies of scale and would prevent unfair distribution of resources.  It would also be fantastically cheaper than the current four tier system.
I have no problem with people funding their own education if their religious views and pocket books are deep enough, but expecting an evidently broke government to do it seems ridiculous. How about some real strong action Dalton?  If you’re going to attack the youngest, lowest paid teachers, why not address gaping inadequacies in the system?
I used to teach in the GTA.  My public school worked hard to integrate Canadians from all over the world, many of them ESL.  Whenever we saw Catholic school data from the same area, their ESL programs were drastically smaller.  Hearing them then crow about how high their literacy test scores were in comparison just made me angry.  When you can pick and choose your teachers and students to create a mono-cultural climate, you’re likely to do better in standardized tests because you’ve standardized your population.  Let’s get rid of that.
This isn’t an indictment of religious or social expression in schools either.  My current school runs a religiously based international mission to great success, and it is open to all denominations.  At previous schools I’ve seen energetic and popular Christian, Muslim, Jewish, Hindu and other student groups who had a very positive influence on the school community.  Then again, I’ve also seen gay-straight alliances doing that, but only in public schools.
My last shot is at the union (of which I’m an active member).  Selling out our youngest members isn’t a solution.  If this really is an ‘all hands on deck’ emergency, let’s spread the joy.  How about teachers who stay past their retirement date not getting paid sick days?  These teachers are making top salary and are often staying on to plump up their already sizeable pension (one that will evidently have evaporated by the time boomers are done with it).  For every ten of them you shake loose into retirement, you’d be able to hire ten young, energetic new teachers at a 50+% saving… and then they could afford to start families, and buy houses and cars, which, you know, help the economy.
If this really is an emergency, I’m left wondering why the lowest paid people on the totem pole are bearing the brunt of it.
If this really is an emergency, I’m left wondering why we aren’t cutting redundancy and pointless systems.
If it’s just politics, then I can expect to pay for everyone else again and no amount of reason will change that.  My gen-x scepticism is running high.