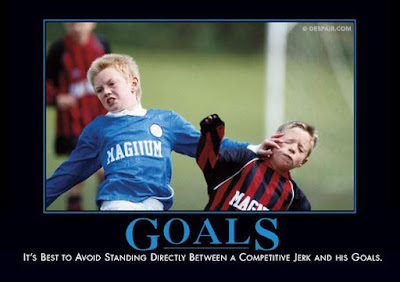 “Among richer families, youth sports participation is actually rising. Among the poorest households, it’s trending down. Just 34 percent of children from families earning less than $25,000 played a team sport at least one day in 2017, versus 69 percent from homes earning more than $100,000. In 2011, those numbers were roughly 42 percent and 66 percent, respectively.”

This isn’t a story about childhood; it’s about inequality.”

I used to love playing sports. Refereeing and coaching at summer hockey camps helped me feed myself in university and I’ve coached, time kept and ref’d soccer and hockey since I was 10 years old.

As I’ve gotten older I’ve found men’s leagues echo the pointlessly competitive nature of kid’s sports with ex-Junior players playing in D division men’s hockey just so they can score half a dozen goals each week and run up the score. It’s nearly impossible to find a men’s hockey league that isn’t populate by assholes.

Max used to love gymnastics, but he ended up getting chased out of it in his pre-teens because the only way to do it was competitively (being female was also increasingly a prerequisite because the entire sport, like all sports these days, orientates itself on the most likely competitive success).

Coaching at school was a way to stay in touch with sports, but that too went sour with student athletes (only the wealthy ones who could afford the time and money to play games and practice after school nearly every day) not showing up to practices and playing with that same pointless competitiveness even when they didn’t rate against the opposition.

I’m currently on a hiatus with sports, but I still miss them. I wish I could find a hockey league that wasn’t an excuse for men to work out their frustrations on each other. I wish my son could participate in sports for the shear joy of it rather than turning every physical activity into a competition. We’d all be much healthier and happier if we had access to financially accessible and for-the-joy-of-the-game sports.

It’s a shame how we’ve turned sports into an excuse for competitiveness – usually along with the pipe-dream that your kid will one day be made a millionaire for playing a game. Having coached at a competitive hockey camp, it’s a tragedy to watch those all or nothing kids not make the cut into professional sports – statistically speaking almost no one does.

Norway sounds like they’ve got this, like so many other things (they also nationalized their oil reserves and used them to pay off their national debt and offer free education to all its citizens), right.

“Norway’s youth-sports policies are deliberately egalitarian. The national lottery, which is run by a government-owned company called Norsk Tipping, spends most of its profit on national sports and funnels hundreds of millions of dollars to youth athletic clubs every year. Parents don’t need to shell out thousands to make sure their kids get to play. And play is an operative word: Norwegian leagues value participation over competition so much that clubs with athletes below the age of 13 cannot even publish game scores.”