I’ve been finding out the history of Triumph Tigers from various places on the interwebs. The first Tigers were born just before World War 2 and were quickly put on hold when the war started. With rigid rear frames and girder front suspensions, these were 1930s bikes in every sense.

Tigers followed the steady evolution in motorbike technology throughout the Twentieth Century, and also followed some rather silly styling trends, like shrouding the mechanicals in 1950s aero inspired nonsense.

Things get interesting again in the 1960s, with late ’60s Tigers, along with the British motorcycle industry in general reaching a zenith before being crushed by their own weight and a lithe, hungry wave of Japanese imports.

Through the long, dark tea time of the soul in the ’70s and ’80s (and while my parents and thousands of others fled the country) Triumph went down in flames along with much of British manufacturing.  In ’83 John Bloor, a building contractor who was looking into the purchase of the derelict Triumph factory to build more homes ended up buying the brand.  After sitting on it for a while he rebooted it and built a new factory.

It’s one of the best examples of British manufacturing rising out of the ashes of old money and old ideas and embracing a more effective approach to manufacturing.  Without the conservative  establishments of aristocratic ownership and unionized labour Bloor was able to reignite British engineering and give it chance to shine again.  You might think that it isn’t properly British if it isn’t mired in limited social mobility and the kind of Kafka-esque bureaucracy that makes building something well next to impossible, but that was only a moment in Twentieth Century British history and doesn’t speak to the engineering prowess of our little island.

After Triumph rebooted in the early ’90s, the Tiger reappeared in ’93 during the second wave of model introductions.  An early example of what came to be known as adventure bikes, the Tiger was a tall, long suspension, multi-purpose machine running a three cylinder engine. 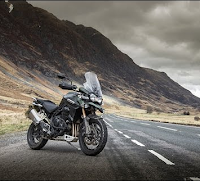 Having tapped into this trend while it was still only popular in continental Europe, Triumph’s Tiger line has been a key part of their brand for the past twenty plus years.  If asked what bike I’d want to take around the world tomorrow, the Tiger Explorer is at the top of the list.

Tigers have been around, in one form or another, since before World War Two.  I’m looking forward to getting to know the one I found this month.