I finally got around to adjusting the Concours’ suspension.  It was pretty unsettled on uneven pavement so I went with the list shared online and aimed everything at ‘right on the money’ which works out to front spring preload of 14mm and rebound dampening of 3 clicks out from all the way in.  The rear got set to 20 clicks in on spring preload and 1 and 1/4 turns out on rebound dampening. 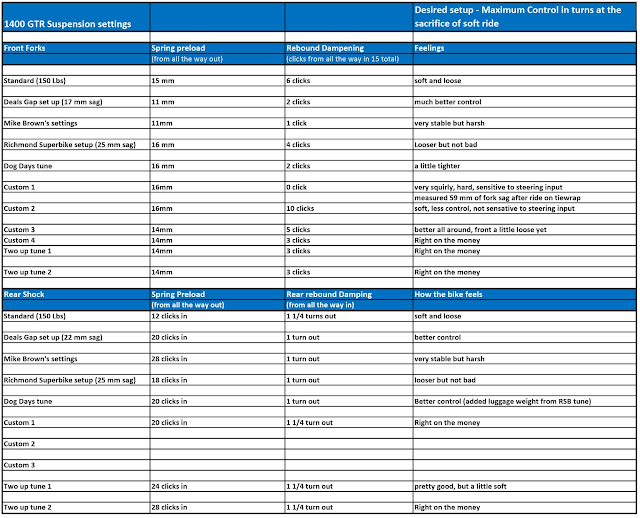 It’s a significant improvement over what the bike was set at before.  On uneven pavement it feels much less likely to bounce and wander.  On smooth pavement it now tracks much better and isn’t such a struggle to hold a line with, though it still feels heavy.  That might be my own fault coming off a Honda Fireblade to the Kawasaki though.

The existing tires on the bike are Michelin Pilot Road 4s which people in the know swear transforms the bike’s handling.  I had a look around and the rear tire’s 2715 stamp means it was built in the 27th month of 2015.  My best guess on the front is that it was 1918 or 2019 in the 18th month.  If that was the case then Declan, the guy I purchased the bike from, put these tires on it in or around 2019 so they’re not only lightly used but also recent! 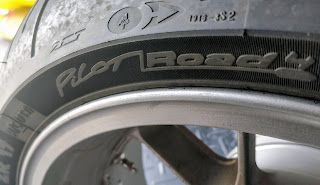 They passed the safety easily and aren’t flat spottted or low on tread so a couple of very low mileage years is likely, which means I’m not in any rush to replace them.  That didn’t stop me from having a look at what new tires for it would cost anyway just so I’m ready (end of 2022 riding season?) to replace them.
Going to a 190/55/R17 rear tire (stock is 190/50 ZR17) raises the back end a bit with a marginally thicker sidewall and stops the bike from feeling so vague.  Bike Magazine describes the handling of the GTR1400 as ‘not good’ and I think this dropin vagueness is what they’re referring to.
Another nice surprise on this used bike purchase is that the former owner put new tires on only a couple of years ago and then barely used them, but now I’ve got some ideas about where to go next.