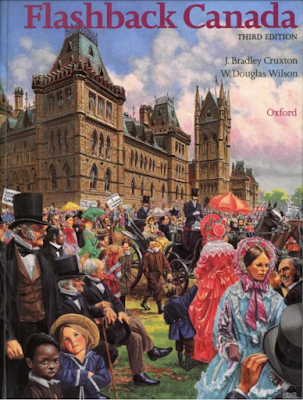 History isn’t just an informational subject, it’s also very much about critical media literacy.  Trying to get a clear view of history through what’s left to us is nearly impossible because human beings will immediately want to spin it for their own benefit.  These prejudices come from the people at the time, the people who decided what survives and the people in charge now.  This propagandist approach has a great deal of power when applied to the study of national history because it produces dangerous byproducts, like patriotism based on national myths that systemically exclude whole swaths of our society.

This is the cover of Flashback Canada, the history book they handed me to teach a grade 8 class during my teaching practicum in Peel in 2003.  I wasn’t a Canadian citizen when this piece of propaganda was handed to me and I was told, as an agent of the system, to indoctrinate the class (most of whom were also new Canadians) with this violently untrue rendition of Canadian Federation.

I can’t find the full illustration from inside the book (it’s a two page spread!) but I recall it had indigenous groups in traditional garb, unaccompanied women and many BIPOC characters fictionally back-written into the narrative of a multi-cultural Canadian history that never happened.  Teaching this “we’ve always been multi-cultural” myth of Canada made me very uncomfortable so instead of teaching the text I found some other historical images of Confederation done close to the time and then the students and I looked at the differences between the textbook’s rendition and other historical documents.  As you might have guessed, Canadian Confederation in 1867 was a lot of white dudes (because they were the only people considered as people under the law – no one else could vote or politically mattered): 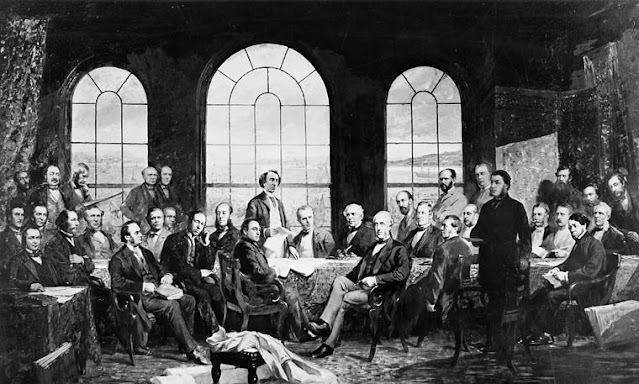 How did this play with a lively, very multi-cultural class of grade 8s in 2003?  Code-switching wasn’t a common term back then but many of the BIPOC students talked about how stuff like this makes them doubt their own experiences with racism in Canada.  This made my older, white Canadian supervising teacher uncomfortable.  These days I’m sure she would be on board with the current ‘woke’ white settler types who want to make make a lot of noise in this moment that will quickly fade to leave us with our lousy status quo again.  Dwelling in the discomfort by prompting discussion and then making systemic change as a result is a way to move beyond our reflexive need to retain a status quo built on lies.

I’ve talked about historical prejudice before on Dusty World but the events currently happening in Canada are bubbling it all to the surface again, though I don’t understand why anyone is so surprised by them.  These children disappeared in plain sight and reports of the nastiness of religious residential schools aren’t new.  Choosing to be surprised by them now feels like political spin.  Part of that latest push is to cancel Canada Day but this politically divisive move only shames anyone who disagrees while amplifying the voices of those who want to leverage this disaster for their own political ends.

I’ve heard (smart, historically aware) people advocate for cancelling Canada Day because aboriginal families are mourning the recent discovery of thousands of children’s graves from the Canadian religious residential school genocide, but the only people reeling from this ‘discovery’ are politicized left-wing Canadians who have now decided to (loudly) acknowledge this hiding-in-plain-sight colonial history.  I doubt native families are ‘stunned’ by these ‘findings’ as they’ve been living them for generations.  This ‘white surprise’ must seem disingenuous.

I’m left wondering if children’s history text books are still as multi-culturally white-washed as that one I was handed in 2003.  My approach to that lesson caused friction with my (white, established-settler Canadian) teacher-mentor.  Teaching rote curriculum out of prejudiced texts works much like taking down statues and cancelling holidays: it’s an effective way to revise historical fact to suit the current political narrative which is itself a nasty piece of work.

In the next two centuries the selfish decisions made by current generations around rampant overpopulation, wasteful consumption of resources and pollution of our limited ecosystem will make any previous genocides look tame, yet we’re quick to burn anything historical that doesn’t meet our myopic ethics.  That well-travelled, carbon spewing first-worlders who hop into their 4×4 SUVs wearing sweatshop made clothing are so loudly self righteous is another example of temporal prejudice, but then you don’t see a lot of humility or self-awareness in history.

It’s easy to criticize previous generations without making any attempt to contextualize their decisions in the time that they were made.  This temporal prejudice is every bit as corrosive as racial or gender prejudice.  Mass consumers waving social justice flags while making decisions that will kill billions in the future are just as blind to their own contextual short-comings.  Wouldn’t it be something if everyone tried to overcome the pomp and circumstance of history with humility, honesty and fairness?

Cancelling holidays  that are guaranteed for you but not for others at the rough end of the socio-economic spectrum reeks of privilege, while taking down statues and renaming things is more about rewriting history to make it less uncomfortable than it is about making any genuine systemic change.  What we should be doing is legally deconstructing confederation and taking the colonial prejudices out of Canada’s political structure.  First past the post British electoral systems prop up old prejudices and should be dismantled but won’t because party ‘representatives’ that could make the changes won’t because the status quo is what handed them power.

The nastiness of Canadian colonial history isn’t easy to stomach but throwing a cancellation blanket over it isn’t going to solve anything; we need to dwell in this discomfort if it’s ever to prompt real systemic change.  Politically driven divisive ideas like cancelling national holidays and renaming everything to make it less offensive is more likely to support the status quo than change it.  We’ll never overcome historically prejudiced propaganda by spinning more of it.  Real change has to happen at the legal level or we’ll just keep spinning lies to maintain this poisonous politically charged status quo. First nations Canadians didn’t get the vote until 1960!  Canada’s concept of representative democracy has always been flawed and yet it’s treated as sacred – which is how you ensure that status quo continues.  These days the old white guys in charge casually dismiss the Charter of Rights whenever it suits them.

“…in September 1917, the Wartime Elections Act was passed in Canada. It granted the vote to women in the military and women who had male relatives fighting in World War I, but it also stripped away voting rights from many Canadians who immigrated from ‘enemy’ countries.”
https://www.cbc.ca/archives/entry/chinese-canadians-get-the-vote-in-1947
Asian Canadians didn’t get to vote in Canada until after WW2!
https://humanrights.ca/story/the-chaotic-story-of-the-right-to-vote-in-canada
“The story of the right to vote in Canada is the story of a centuries‐long struggle to extend democratic rights to all citizens. It’s a chaotic tale that includes rebellions and riots, as well as protests, and visits to the Supreme Court of Canada.”

“Indigenous peoples were not invited to or represented at the Charlottetown and Quebec Conferences. This despite the fact they had established what they believed to be bilateral (nation-to-nation) relationships and commitments with the Crown through historic treaties. (See also: Treaties with Indigenous Peoples in Canada; Royal Proclamation of 1763.) The Fathers of Confederation, however, held dismissive, paternalistic views of Indigenous peoples. As a result, Canada’s first peoples were excluded from formal discussions about unifying the country.”

You won’t find anyone on the Canadian Encyclopedia page who isn’t an old white dude because they are the ones that confederated Canada, specifically while denying anyone who wasn’t from their background any participation.  Re-writing history to ignore what actually happened isn’t a great way of learning from those mistakes.