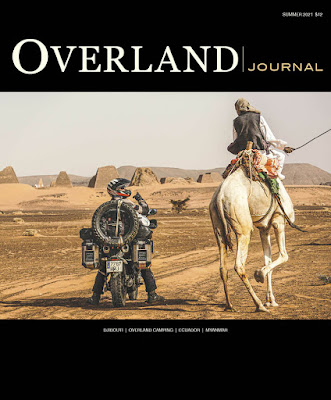 I came across Overland Journal in Indigo that other day and the combination of reasonable price ($12CAD) and very high quality (it compared favourably with magazine-book combos asking $25+) had me picking it up.  It isn’t motorcycle specific but does include off road and adventure bikes along with pretty much any vehicle you might go off the beaten path with.

I usually do that kind of off-roading with completely inappropriate vehicles.  In the early noughties my wife and I beat a rented Toyota Camry to within an inch of its life on the the logging roads in the interior of Vancouver Island.  Another time we were in a rented Citroen mini-van in Iceland watching arctic foxes run across the empty landscape.  In both cases we got deep into the wilderness in rental 2wd vehicles, but then we got a Jeep Wrangler as a rental car last year and it started giving me ideas.

I put myself through university working as a service manager for Quaker State’s Q-Lube and whenever a Jeep came in you needed an umbrella when you walked under it for all the fluids leaking down on you.  That negative experience put me off the brand for years but last year we got a Wrangler as an insurance rental after and accident and it changed my perception. 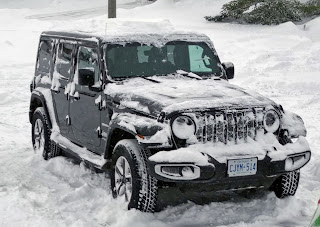 It was a 2019 Jeep Wrangler four dour with about 20k kilometres on the clock and it was tight!  Everything worked and felt quality and it did something that no car has done for me in the past decade; it felt like an event driving it.

Since bikes set in I’ve fallen out of love with cars (trucks, whatever), but the Jeep made driving feel special again.  Performance cars seem kind of pointless when I have two bikes in the garage that are faster than anything but apex million-dollar plus super-cars, but the Jeep came at it from another angle.  The big tires made it a challenge to manage on pavement and the big V6 in this one was a stark contrast to the sub-two-litre mileage focused appliances I’ve been driving but maybe that’s what made it feel special.

There was a point where we could have taken the other car (a Mazda2) down to Toronto but took the Jeep instead and it made the whole experience less like a long, difficult winter drive and more like an event.  Being higher up off the road meant I wasn’t looking through other people’s road spray all the time and if I wasn’t heavy on the gas the thing was getting mid-high-twenties mpg.

Another time we were out in it and my brother-in-law (a former Jeep owner) and our sons went out for a ride and I shifted it into 4wd and drove right over the snow mound in the Canadian Tire parking lot, much to everyone in the car’s amazement.  This was a ten-foot plus high mound of snow and the Jeep went right over it – with road tires on!  Deeply impressed with the vehicle’s capabilities and character is where I was when we handed it back after our car got returned.

I also used it to take a thousand plus pound of ewaste to recycling from work and the heavy duty suspension and utility of the thing made this an easy job when the little hatchback would have been blowing shocks and wallowing under the weight.  Having a vehicle that takes on larger utility tasks makes sense when you do a lot of it.

I’m getting to the age now where things seem strangely expensive.  My first car cost me $400 and took me a hundred thousand kilometres.  A Honda Civic hatchback I had in the early noughties took me over a quarter of a million kilometres for less than seven grand.  The only new car I’ve ever purchased (that Mazda2 that has been flawless for over 120k over ten years of ownership) cost me $17k new, all in.  My wife’s Buick Encore cost an eye-watering forty-grand back in 2016 new and I’m not interested in double car payments so won’t be looking until we finally pay that one off (which seems like it’s taking forever  with our strange new world of 7-9 year finance schemes).  When that debt finally gets cleared I’ll be looking at a Jeep Wrangler.

From an ‘overlander’ point of view, a dependable long distance vehicle capable of going off the beaten path means my wife and I can do what we’ve always done, but more so.  In the pre-covid times we drove from Ontario to the West Coast in 2018: 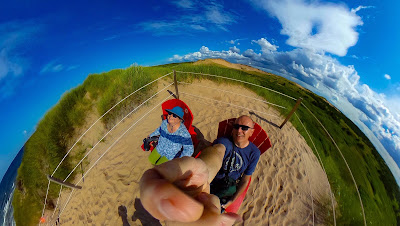 In 2019 we took the same tiny Buick Encore to the East Coast of Canada, but the vehicle we drove limited our ability to go off the beaten path (or even off pavement).  What a Jeep would do is enable us to do the things we defer to (in rental cars) in something designed for that kind of nonsense.

This has me encouraging my lovely wife to join us at SMART Adventures this year to learn some off road driving in a side-by-side while we dirt bike.  Which brings the overlanding vehicle back to bikes again.  You can go deep in a Jeep but you can get places on a dirt bike that you can’t in any other way.  The Jeep would be a fantastic platform for all manner of biking shenanigans. 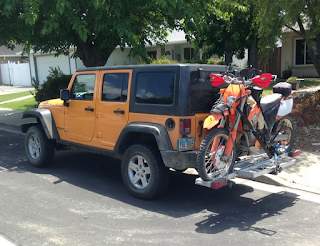 Whether it’s taking a dirt bike to a trail or a trials bike to an event, the Jeep would be capable of doing it efficiently.  With some canny rear mounted racks it wouldn’t even require a trailer.

The cost-no-object green option would be to pick up a KTM Freeride and an Jeep Wrangler 4xe and then work out how to charge the bike from the hybrid Jeep’s electrical system.
Overland Journal has a lot of advertisers who specialize in making vehicles long distance ready, including many that specialize in prepping Jeeps for the long haul.  A Wrangler 4xe with a roof mounted camping option, KTM on the back and the ability to go self-contained into the wilderness for days at a time would make for a thrilling combination.

The bike and the fanciest Wrangler would cost less than a base model BMW mid-sized SUV, so it isn’t even crazy expensive (well it is, but that’s just because I’m old – everything’s expensive!).