Cycle-Ergo, the motorcycle ergonomics simulator, is a great online resource for getting a sense of what you’ll look like and how you’ll fit on a bike.  Unlike cars, your options with bikes aren’t as easy as sliding your seat back or adjusting the steering wheel.  To make ergonomic changes on a motorbike you need to change hardware and make physical changes to make it fit.

The other day I was out on my trusty 2003 Triumph Tiger 955i.  I came off a Kawasaki Concours 10 to the Tiger and while the Connie was comfortable, it made my knees ache on long rides.  The first time I sat on the Tiger it felt like a bike built by people the same shape and size as me because it is.  I can go for hours without putting a foot down without a cramp on the Triumph.  This got me thinking about the differences between the big Kawasaki that sits next to the Tiger in the garage these days.

Cycle-Ergo gives me a quick way to check out the differences.  Forward lean is much more pronounced on the Concours 14 (12° vs an almost vertical 4° on the Tiger).  Knee angle is the same and my knees aren’t bothering me on the Connie but hip angle is 6° tighter on the Kawasaki which explains the cramps I was feeling after today.

I sold a Honda Fireblade to bring the 1400GTR in and that bike had an extreme ‘sports’ riding position which was basically like doing a push-up on the bike (you lay on it) – it ain’t easy on the wrists.  There are advantages to this aggressive riding position.  When you want to get down to business in corners a forward lean gives you a more intimate relationship with the front end, which is why sports focused bikes tend to sit a rider the way they do.  If I lived somewhere where roads were dancing with the landscape instead of cutting straight lines across it I’d have happily kept the Fireblade but in tedious Southwestern Ontario it didn’t make much sense.

Today I did a 200km loop on the Kawasaki and the constant lean does make it tiresome on the arrow straight roads around here (I have to ride 40 minutes to find 10 minutes of curves).  In the twisties the Concours is much more composed that the tall, skinnier (and ADV) tired and leany Tiger.  The Concours is a 50+ kg heavier bike but you can see in the animation that it holds its weight much lower than the Tiger.  In the bends today the Connie was fine but the Ontario-tedium I have to deal with most of the time has me thinking about ways to ease that lean. 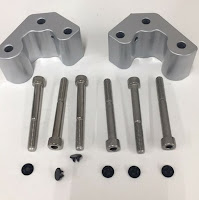 There are solutions to this in the form of ‘bar risers’ which are blocks of machined metal that you slip in under the handlebars to bring them taller and closer to you so you’re not stooped.  For me the lean also means I’m putting a lot of weight on my, um, man-parts, which end up pressed up against the tank in the lean.

I had a look around at bar-risers.  There are number of people who put them together including some cheaper Chinese options but I ended up going with Murph’s Kits C14 bar risers.  Murph is well known in the Concours Owners Group and has been producing Concours specific parts for decades.  His risers aren’t quite as tall as some of the others and look to solve the problem without over-solving it by giving too-tall handlebars that spoil the lines and the purpose of the bike.

The biggest ergo-thing I did on the Tiger was getting a Corbin seat for it which makes it a long distance weapon.  I’ll eventually do the same thing for the Connie but I think I can make do with the stock seat this year and then do the Corbin over the winter.  That doesn’t stop me from mucking around with the Corbin seat simulator though: 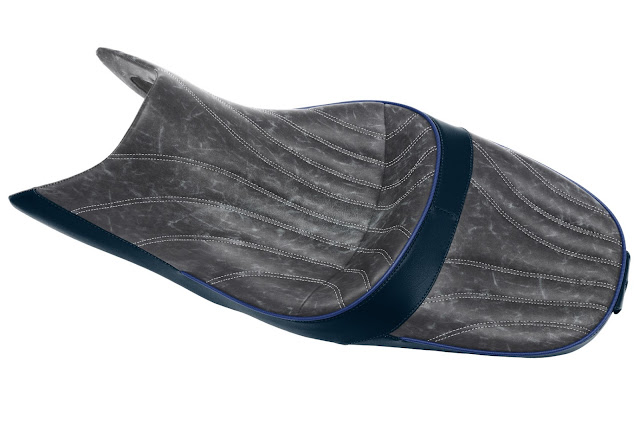 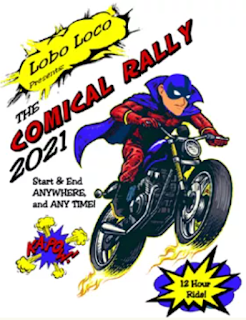 By next spring I’ll have a C14 that fits, but it isn’t as easy as sliding the seat back in a car.  In the meantime we’ve got the Lobo Loco Comical Rally coming up at the end of the month.  That requires a minimum of 400kms travelled in 12 hours and will need more than that if we’re going to be competitive.  I’m hoping my bar risers will be installed and I’ll bring the good ole Airhawk out of semi-retirement to keep me limber over a long day in the saddle.