We pulled into Creemore just past noon with rain forming on my visor.  My lovely wife (who is very
good at finding a seat in a restaurant) got us just that on a covered patio at the Old Mill House Pub and we enjoyed our first meal out since the pandemic started while watching the rain fall. 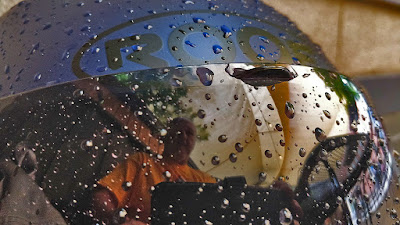 The thunder cell past over just as we finished lunch so we had a nice walk around Creemore checking out the Creemore Bakery & Cafe coffee shop and the local, independent bookstore, Curiosity House Books.  Of course, we stayed just along enough that the next cell was moving in, and it was a humdinger!  We could have sat it out but the afternoon was getting long and we had a doctor’s appointment to get to back home, so we got ourselves ready and jumped on the bike just as the rain came again.

This wasn’t a summer shower like the last one, it was torrential.  By the time we turned on to County Road 9 to follow the Mad River up the Niagara Escarpment and hopefully through the storm, the road was a river itself and visibility was down to just a few car lengths.
This was my first time tackling this kind of weather on the Concours and I was doing it two up and on a schedule.  I don’t know if Kawasaki Heavy Industries makes nuclear submarines (they do, of course), but the Concours handled this biblical end of time storm like one.  With the windshield raised I was able to duck out of the deluge in my face and track through the tsunami.
County Road 9 twists and turns as it follows the Mad River up the side of the escarpment and the volume of rain was already causing flash flooding.  As we approached Duntroon a construction site on the left side of the road had washed out leaving half a foot of muddy water running across the road.  I angled the bike to hit it at 90° and we crossed effortlessly leaving a wake of muddy water.  Further up the river had burst its banks and had flooded the dirt roads leading over it.
Stopping seemed more dangerous than the alternatives so I just pressed on.  As we climbed out of the valley the rain, which had been thumping down in quarter sized drops so heavy I thought they might be hail eased and stopped as quickly as it came.  As we crested the summit the sun broke out, highlighting the green valley behind us that was still under a diabolical sky.  We pulled up to the intersection with Grey Road 124 which would lead us down toward Horning’s Mills, Shelbourne and then home, except the sky south of us wasn’t just dark and sinister, it was green, like a fresh bruise.
“I don’t think I want to ride into that,” I said to Alanna.
“Noooo…” Alanna said, eying the apocalypse south of us.
“How about we jog west to Dundalk instead?” I said, nodding to the turnoff just south of us. 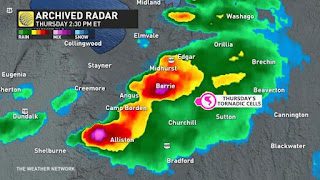 The sun was out and the road was steaming as we sat there watching Shelbourne getting rocked by a storm cell that would go on to Barrie and wreak havoc half an hour later.

A deke onto County Road 9 and we were passing through county side washed clean by the passing storms.  We caught another followup cell past Dundalk but it was nothing compared to the submersion we’d experienced coming out of Creemore. 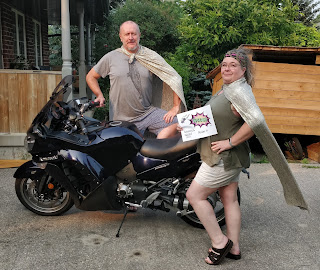 It was one of those moments when you bond with a new bike.  You ride it well and it performs like the fantastic piece of engineering that it is.  As we thundered home (making the appointment with 10 whole minutes to spare), I found myself appreciating the Neptune Blue Kawasaki in a new light.  This bike offers a level of versatility, even in the most obtuse situations, that opens up riding opportunities that I might otherwise not have considered.

On Friday we’re taking a run at Lobo Loco’s Comical Long Distance Rally.  We’ve got the right bike for the job.