Almost ten years ago I came across Matt Crawford’s Shop Class As Soulcraft, a brilliant little book that helped frame the value of my tangible real-world skills after years of academic abstraction.  At that time I was changing gears from English to technology teaching and this book helped me reclaim my millwright apprenticeship and years of hands-on skills development in information technology I’d left behind when I wandered into ivory towers.

In addition to framing skills honed in the real world where results rather than opinion mattered (you can’t fake brake repairs like you can literacy test scores), Crawford’s philosophical treatise on manual skilled labour also explained the challenge of trying to manage in a world where success criteria are both invented and met in a fictional world of plausible deniability:

“Crawford also does a brilliant dissection of the ‘peculiarly chancy and fluid‘ life of the corporate manager (substitute administrator or educational consultant for equal value here). In a world with no objective means of assessing competence, the manager lives in a purgatory of abstraction using vague language “…staking out a position on all sides of a situation, so you always have plausible deniability of a failure.” Crawford goes to great lengths to point out that this isn’t done maliciously but rather as a means of psychic protection for the people trapped in this morass.”

– Dusty World quoting Shop Class As Soul Craft back in 2012

This chancy and fluid nature has been stretched beyond breaking during the pandemic as the people running public education, sometimes in the same sentence, can offer completely contradictory direction.  From “students must maintain masked cohorts while in class” followed by: “everyone should leave the building in large unsupervised, unmasked groups at lunch” to the arbitrary rules around classroom layout (all tables must face the same way, unless we’re trying to stuff 31 students into your room then you can ignore that), I’ve come to find that I don’t thrive in a chancy and fluid world of conflicting absolute rules.  The past two years in OntEd provides ample examples for another Milgram Obedience Experiment. 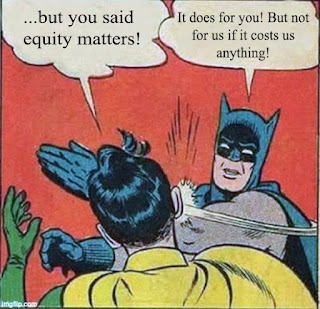 This was cast in a stark light in a recent online PD session my lovely partner attended on equity.  This is another wildly contradictory example of what is either cynical manipulation or peculiar, chancy and fluid management think:  equity matters, but pivot online during snow days even while we refuse to provide any connectivity or technology support for students in need.  When it costs something or requires effort, equity suddenly becomes quite diffuse.

In that PD session, Alanna noted that many of the people in ‘lead’ roles aren’t walking the talk.  A righteous curriculum lead jumped in to tell her she was wrong and that everyone in administration got into it with the best intentions.  When I heard about it after I found this rhetoric interesting.  I don’t doubt administrators get into it for all the right reasons (and never because classroom teaching was something that was beating them up causing them to look for an alternative).  I’m also not so oblivious as to think that administrators have any say in what is going to happen – they’re middle management and are told what to do by people higher up.  What I am curious about is, if they’re so intent on looking after students with best pedagogical practices, why they push directives that directly hurt student well being and learning.  This has happened a lot in the past two years.

As things have staggered back from the brink last year we continue to see irrational and often cruel decisions being made, often under the auspices of public health in order to prevent an ongoing pandemic health crisis, but they seldom make sense.  I set up my room with as many tables as I could stuff into it following public health requirements and then was told to change it out of compliance with those guidelines so we could stuff more students into the room… during a pandemic.  We’re told we have to wear inferior, poorly sized PPE even when we’re willing to bring our own superior, properly sized masks.  Staff are being made to cover (but don’t call it coverage so we’re in compliance with our contract that would have limited the number of coverages) other classes putting them in front of what can end up being hundreds of students every day in order to make a cruel, marathon class quadmestered schedule work.  A schedule that is utterly meaningless as students mix freely before and after school and at lunches every day.  Yesterday I watched a dozen boys leave a washroom together, most of them not wearing masks correctly, and walk back to different classrooms.  The union is very proud of dunking our membership in this much face to face teaching every day in order to enable the directives of a vindictive government.

Nothing makes sense, in many cases it’s contradictory and completely irrational, and it’s also hurting students.  An English colleague the other day told me her applied 2.5 hour class is one step away from complete chaos every day.  Many other teachers are noting the impossibility of covering curriculum in marathon classes that directly contradict the data we’ve collected on best practices around student learning.  Yet when told to execute this cruelty everyone in management makes it happen, though, I’m sure, they all got into it for the right reasons.

I’ve been reflecting on Dusty World this fall but the negativity of the posts has me not publishing them as I’m trying to find some sense of well-being in this ongoing mess.  Wallowing in the cruelty and absurdity of what we’re doing won’t get me there, but I still record what’s happening because one day I hope the public education system does more than talk about student learning and wellbeing and actually acts on it.

These past two years have turned into a cautionary tale about what a vindictive government can do during a public health crisis.  They’ve also shown that the people running public education are willing to do whatever they’re told even when it’s contradictory and cruel.  I’ve said it before and I’ll say it again, until education (and healthcare) can operate according to best practices rather than the whims of populist politicians this will keep happening.  I need it to stop happening.  I can do good work when given the framework or even when the framework isn’t actively working against me while trying to support student learning and well-being.