We’re seeing temperatures in the low -20s these days and waves of snow passing through creating banks that are hard to see over.  To quote the Penguins of Madagascar…

The roads themselves are sanded and snow covered too.  We’ve got a major storm rolling in tonight that looks like it’ll pitch another 48 hours of the white stuff at us.

At this time of year I tend to be in a mood as it’s been far too long since I’ve leaned into any corners.  Compounding the lack of riding is the tricky nature of trying to find parts for the old Triumph Bonneville in order to keep that project purring along.  What parts there are pretty damned expensive too.  I’ll get back into it soon enough, but in the meantime I thought I’d give the new (er) Triumph’s fuel injectors a cleaning. 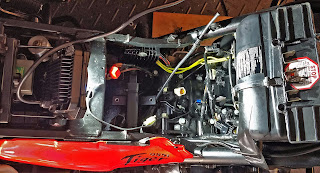 I’ve been in and out of the Tiger so many times that it’s second nature.  The tank removal process (which is pretty complicated involving removing 4 panels and many awkward fasteners) can be done (blindfolded!) in about 10 minutes.

Last year I installed a new regulator/rectifier, but didn’t install it properly because I didn’t want to dismantle the whole lot.  The first job was to properly fasten it down. 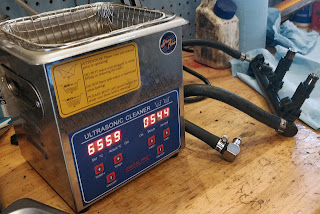 The second job was to remove the fuel rail.  This is easy on the 955i Tiger (two bolts), but one was threaded (having a 19 year old bike as my regular runner does produce some headaches).  A cunningly installed second nut on the back of the threaded one had it all back together tight though.

For the fuel injectors I heated up the ultrasonic cleaner to 65°C and ran the vibrations for 20
minutes before cleaning them up with fuel cleaner.  The injector nozzles are very fine, so even a small piece of gunk getting past the fuel filter could cause headaches. 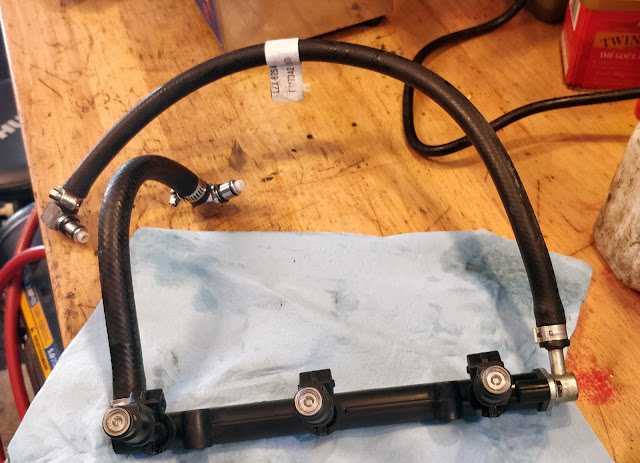 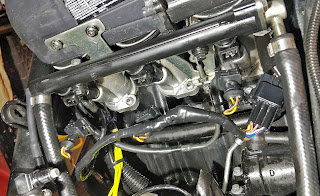 Once cleaned and sorted I press fitted the injectors back into the rail and reinstalled it back onto the bike.  The injectors press fit (there are thick rubber gaskets on each end) into the metal injector body on the bike too.  The only tricky bit was sorting out that threaded mounting bolt, but there is space behind the rail for a second nut and it did the trick.  While I was in there I cleaned all the electrical connections and put dielectric grease on the connectors to keep everything neat and dry. 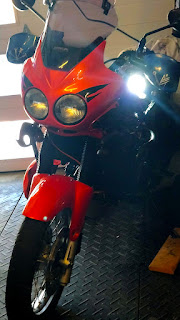 It all went back together well and I had the tank back on and the Tiger back in hibernation before it knew what had happened to it.  I’m hoping the cleaning sorts a slow starting issue that developed after I solved the stalling issue last summer.
The old Tiger’s fuel injection is one of the crankiest things about it.  Early mechanical fuel injection is famously, um, personality ridden.  The latest (delightful?) bit of character is having to lean on the starter motor for several seconds before it fires.  It used to fire at the touch of the starter, so I’m hoping to get that back again.
We’re in the middle of semester turnover and I haven’t had time to chase the old Triumph parts guys (who like to do things old school on a telephone), but that’s next on the list of things to do before the weather breaks and I can lean into a corner again.