Skip to content
What Mr. Cleese is so eloquently describing above is the Dunning-Kruger Effect, something that didn’t receive a moment of notice in the metacognitive PD we recently received.  Metacognition is often seen as a way to encourage student directed learning, and I’m generally a fan of the idea, but this bias deserves some consideration, especially if we’re trying to improve student learning. 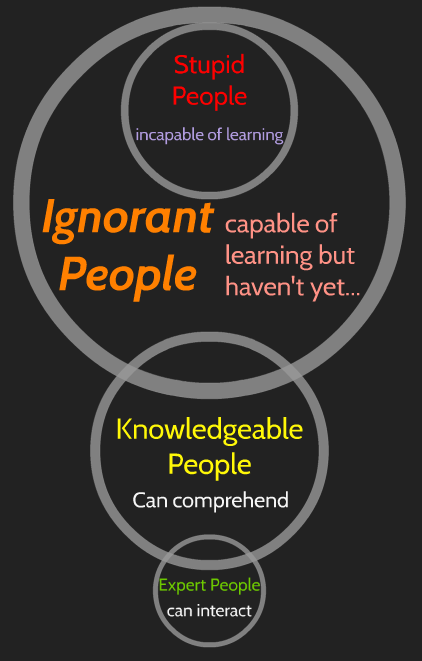 In trying to break this down I came up with the Venn diagram to the right in hopes of understanding what should be a process toward enlightenment rather than a barrier to it.

There is a degree of stupidity so intense that it is self-consuming.  People trapped in that tend to reinforce their own ignorance and simply can’t hear alternative points of view, even if they are self evident.  These people tend to wallow in limited, habitual action.  If you want to see it happening watch most digital natives on a computer.  In that kind of stupidity you’re going to be hard pressed to learn anything, let alone expect any kind of accurate self assessment.

Ignorance is bliss, you’re going to be happy if you think you know everything.  Anyone who lives in an Earth centred universe and thinks their species the darling of creation is that kind of certain-happy.  People like this make a point of surrounding themselves with like minded people.

If you can begin to take in evidence from around you, certain self-evident truths will begin to make you question your beliefs.  That would get you out of the stupid vortex and into ignorance.  The more you realize you don’t know, the more rapidly you’re able to move toward knowledge.  Humility is a vital component in this process, and where metacognition could begin to help.

In the realm of knowledge you may know many things but your experience with them is limited, so while you know theory you are unable to successfully interact with it in reality – this is one of the reasons I enjoy teaching tech so much (reality doesn’t coddle you in your learning).  You’ve read about riding a bicycle but you’ve never done the deed.  The final step is to do as well as know, only then do you graduate from talking head to doer.
Metacognition is a valuable tool in creating the kind of self-aware humility that can move you from ignorance to knowledge, but applying it too early will push you in the wrong direction.  At the early stages of learning you are incapable of knowing what you don’t know, so you’ll think you’re better at something than you are.  This appears especially true in mind based, academic work because your math equation doesn’t burst into flames when you do it wrong.

At no point did our metacognitive training suggest that there was a threshold where you should (carefully) begin to implement self-analysis of learning, rather, it was suggested that we do this continually and throughout, which appears to be just what you shouldn’t do if you want to get somewhere with it.