My favorite magazine is WIRED, and I’m a magazine guy.  No other magazine dares me to think as widely and as daringly about the times we live in (if you’ve never picked up a copy, give it a go!).  Wired will go after interests of mine (internet culture, technology, etc) but it will also introduce me to the leading edge of fields I have only a passing experience in, and make me care about them.

This month they turn 20 years old.  They’ve been daringly guessing what will happen next for two decades now, and while they don’t always get it right, they always make you realize what changes are upon us.

As  I read a new edition I usually want to link and share the ideas they stir up.  This edition is full of them as Wired goes over an alphabet of ideas considered in the last two decades. 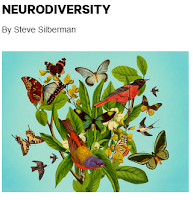 Neurodiversity is a topic that hits close to home.  With a son diagnosed, I’ve come to recognize how I’ve dealt with ASD myself.  One of the reasons I love reading Douglas Coupland or William Gibson is because many of their characters are neuro-atypical, and it’s nice to read about people like yourself; I find much of mainstream media quite alienating.

I’ve struggled with my inability to care about social distinction forever, and I feel for my son while he does.  I also think that difference is wonderful.  When we heard the diagnosis I said, “excellent! Who would want to be normal!?”  I guess the normal people do.

WIRED’s take on all this? Neurodiversity is like biological diversity; it develops resiliency.  The neurodiverse might not all be geniuses, but the ones that are (and geniuses by definition are neurodiverse) may very well save the human race.  Diversity allows a species to survive in extreme conditions, conditions that we’re making for ourselves.  As long as we’re hammering round pegs into square holes, we’re not allowing human beings to be as neurally diverse as we naturally are… and we’re hurting ourselves in the process.  Normal people really need to get off their high horses.

I wish I could convince the school system of this as it focuses exclusively on short comings in hopes of making the exceptional ceptional..  If they could improve my son’s image pattern recognition (which is astonishing), his special skills would be enhanced, instead they rush to make him fit a mould.  The system presses him to be as widely and flatly skilled as ‘normal’ people in hopes of making him what, normal?  Upcoming standardized tests won’t examine his superhuman abilities, they will focus on what ‘normal’ people are expected to do (they have charts).  When he fails a literacy test because he’s unable to verbalize what he knows in a manner that suits the testers, we’re left with the pieces.

Some might suggest that alternative school systems might offer a response to this, but I doubt it.  Adding money to remove expectations isn’t what is needed here.

Like eating factory produced meat, driving SUVs or buying sweatshop made products, how we treat the neurodiverse is going to be one of the things that points to our backward (hypocritical) thinking in the early twenty first century.  Like the eighteenth century person who thought slavery was perfectly acceptable, this social ignorance makes us look like fools to history.

Fortunately, I don’t really care what most people think about it.